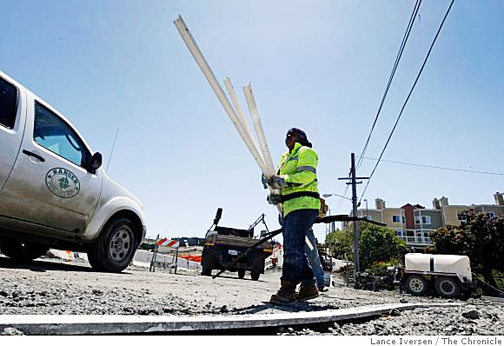 The most expensive way to pay for these subsidies is through gentrification. People who are willing to pay exorbitant amounts for homes for the privilege of living in San Francisco pay for gentrification. This payment insures that gentrification will occur and will continue. I suggest a new paradigm.

In a July 12 insight opinion editorial in the Chronicle, Mayor Gavin Newsom claims the most important item on his agenda is the revitalization of Bayview Hunters Point. Illustrating his editorial is this picture of a Black woman laborer. She is likely to be the only Black worker on any Hunters Point construction if things do not change.

Hunters Point and Visitacion Valley are the two largest areas for development left in the city. If they are gentrified, only the very poor and the very rich will live in San Francisco.

I propose an anti-gentrification subsidy for all endangered residents. For the first time, a city – the City and County of San Francisco – should provide an interest subsidy for the community of the poor. Most aid to poor people, such as food stamps or welfare, subsidizes the purchase of the bare essentials with no opportunity to build a family’s wealth. Most aid to the rich subsidizes investments that make them richer.

Neither the interest rate subsidy nor the on-the-job training subsidy is new. They are tools that have been used by others who were serious in their wish to address a grave economic and social problem. The on-the-job training subsidy was successfully used in Oakland in the early ‘70s. It produced union cards for Blacks and other poor people in very large numbers. The Farmers Home Administration has used the interest rate subsidy since the Great Depression. Both of these tools have been used to help the community of the poor.

Redevelopment of the Sunnydale project and the Hunters Point projects should provide benefits to the community comparable to the subsidies provided to the developers. Developer’s risk and community risk are about equal. Developers risk other people’s money. The community risks their families’ future. They are allegedly being displaced for the common good. They are being told that they can come back to their revitalized communities. This promise was made to Black and other poor people in the Fillmore. Decades ago. These promises were not kept.

The Redevelopment Agency must determine the gross receipts from the redevelopment of these projects. Once that determination is made, it is then possible for communities to negotiate a fair community benefit. Since these developments have the most impact on the community of the poor, it is those communities that must be empowered take control and protect themselves from exploitation.

The right to redevelop the Sunnydale and Hunters View projects have been awarded to large developers. But the dismal housing market has slowed their progress. That gives the community time to renegotiate and choose local developers they trust – developers who will enable residents to remain in their neighborhoods and become homeowners and who will employ contractors and workers from the community to do the rebuilding.

There needs to be a new paradigm. Business as usual would provide for a buy off of community activists. Giving them grants around which to organize various communities of interest usually does this. Since, in the new paradigm, we know the value due, it is possible to establish a just determination and to configure empowerment tools.

The Visitacion Valley Community Development Corp. estimates that the Hunters View project will expend about $1.5 billion of other people’s money. The community benefits that should go to the community of Hunters Point are about $350 million or 25 percent, whichever is greatest. To demonstrate good faith, a most pressing problem, the health of our children, must be addressed.

The most important empowerment arrangements are quality health for children, affordable homeownership and job skills. This is made possible by 1) delivering three asthma diagnostic and treatment breathmobiles like the one in West Oakland to the Bayview Hunters Point community, 2) assuring homeownership for those who are displaced in the name of revitalization and 3) insuring that the people in the community of the poor have the training, the skills and the jobs to earn a prevailing wage so they can pay the costs of homeownership.

The cost to operate three asthma breathmobiles for five years is $10 million. The homeownership cost will be in excess of $290 million. The non-union-controlled job training will cost $50 million.

It is no longer acceptable to allow one group of organizations to control training and employment. There is already competition in training electricians, plumbers and HVAC workers. Private schools are springing up throughout the Bay Area. It is cheaper to pay tuition in these schools than it is to subject our unemployed to the pre-apprenticeship regime imposed by some union locals.

It is not too late to stop the hemorrhaging of poor people and particularly Black people from San Francisco. Times like these when the economic outlook is bleak, when government budgets and household budgets have been slashed and the safety net shriveled, are the right times for a bold new paradigm.

Economic justice is imperative. Gentrification that displaces the poor and denies them the means to earn a living is intolerable. Visitacion Valley and Bayview Hunters Point can show the world the way communities can empower themselves to ensure good health, good jobs and homeownership for all.