Special to the NNPA from the Amsterdam News 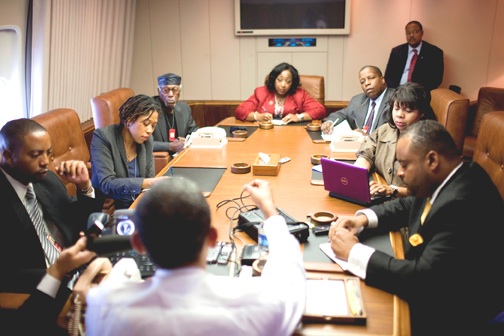 New York (NNPA) – When seven Black journalists are invited to fly on Air Force One with the president, you know there’s been a dramatic change in the White House. Moreover, the journalists had an exclusive roundtable interview with President Obama, and he was as accommodating as the commodious surroundings.

For more than 20 minutes on a flight from Andrews Air Force Base to Kennedy Airport in New York, where he was scheduled to address the NAACP’s centennial convention July 16, Obama fielded a range of questions.

When Kevin Chappell, a senior reporter at Ebony, mentioned disparaging comments by Michael Steele, chair of the Republican National Committee, Obama said, “I think Mr. Steele should focus on the Republican Party.”

What the president chose to focus on at the moment was entrepreneurship and urban affairs, “and we must particularly target communities most in need.”

Equally important to the Obama administration is the issue of health care and he told Cynthia Gordy of Essence magazine that “it is critical that we close some of these gaps in health care for all Americans, but particularly for Blacks and Latinos,” where the incidence of HIV/AIDS is disproportionately high.

As the veritable flying White House touched down, Obama elaborated on health care reform in response to a query from BET.com’s Pamela Gentry concerning the impact of his plans on African-Americans and the single-payer option. “We don’t have a final bill yet,” he began. “And as I’ve said before, there are countries where single-payer plans have worked well, but we have a tradition of an employer-based health care system … If people are happy with their health care, we don’t want to change it.

“But for those who don’t have health care because their employer doesn’t offer it, then they have an option,” Obama added. “And we are confident that the bill we produce will provide a level of subsidy that will guarantee affordable health care for all Americans.”

With the NAACP on his agenda, as a reporter with the Amsterdam News, I wanted to know the extent to which he would deal with race relations, reminding him of a recent comment by Julian Bond, chairman of the NAACP’s board. While Obama’s daughters can fly on Air Force One, little Black girls in the suburbs of Philadelphia are banned from a swimming pool, Bond observed.

“Obviously, this is a reminder that because of my election that racism is no longer an issue in America, and that is not true,” Obama asserted. What needs to be done to eradicate the racial disparity, he continued, promising to address this issue during his speech at the NAACP, was “to improve substandard schools … to focus on economic parity, economic development and access to higher education.”

Derek Dingle, editor-in-chief of Black Enterprise, keyed his question to the condition of small businesses and to what degree they could expect support from the Obama administration.

“First of all,” Obama said, “we are focusing on small businesses already. The Small Business Administration (SBA) has increased its guarantees in terms of lending and it has been much more aggressive in trying to fill the gap as private lending contracted.”

He recounted a recent meeting with minority automobile dealers to discuss their plight. “And the SBA is one of the primary tools to make sure those minority dealers are able to get the money they need to operate a show room.” It was a point that was clarified by Valerie Garrett, one of his chief aids at the roundtable.

Obama believed that the main problem confronting small and minority businesses was not so much the lack of capital, despite its critical importance, but the overall dismal shape of the economy.

Foreign policy and Africa were among several issues posed by April Ryan of American Urban Radio, and the president listened intently.

“In terms of foreign policy, that’s one of the reasons I just came back from Ghana,” he stated, “and that was to focus attention on the fact that Africa was not just a side note in our foreign policy, but a central concern of our administration.”

The encouragement of economic development and good governance are among some of the key points in providing aid to African nations, Obama stressed, and he mainly reiterated a policy he outlined during his speech before the Ghanaian parliament.

Commentator Roland Martin of CNN had the final question and he touched on the issue of vouchers and education, which the president agreed was the most important issue for the African-American community.

“If we can close the achievement gap, then a big chunk of the economic inequality is diminished,” Obama noted. “We have got to get our kids up to speed. Now, how do we do that? Better teachers, greater accountability, more resources combined with more reform.”

He then invoked his Secretary of Education Arne Duncan and applauded his push for more aggressive reforms.

We had been on the ground for 15 minutes and gradually he was surrounded by his aids, beckoning him for departure to the next stop in New Jersey and then on to the NAACP where much of what he shared with the reporters would be revisited with gusto at the Hilton.