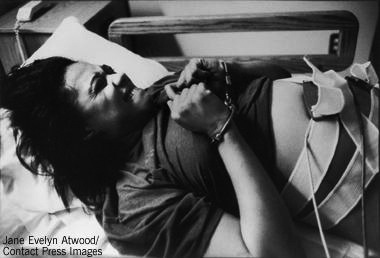 Childbirth is a painful and difficult experience for most women, but Toya Murray says for her, it was torture. Like many other incarcerated women across New York state, she was shackled immediately before and after giving birth.

“When it was due for me to have my baby, they shackled my hands and feet when I went into labor to go to the hospital,” Murray said.

Murray was pregnant when she began serving a 15-month sentence for a nonviolent crime at Bedford Hills Correctional Facility in Westchester County in 1996. She was often shackled when transported between facilities, but said she never experienced anything like the discomfort of being restrained during labor, when she was unable to move her arms or legs. She worried that her child’s safety would be jeopardized since she had little control over her body.

Once the baby was born safely, Murray’s ability to hold her newborn was limited by the metal shackles. What should have been a tender moment between mother and child was awkward and restricted.

“Anything could have happened when the baby came out. I felt very uncomfortable,” Murray said. She told her story outside Gov. David Paterson’s Manhattan office July 9, at a rally held to end the shackling of inmates before and after delivery.

A coalition of more than 10 organizations worked to push anti-shackling legislation through both the New York state Senate and Assembly in May. This network, which includes the Correctional Association of New York, Human Rights Watch and Women on the Rise Telling HerStory (WORTH), is now waiting for Gov. Paterson to sign the bill.

The decision to use restraints during labor and childbirth is currently within the purview of individual correctional officers. The bill creates uniform statewide standards and only permits one wrist restraint during transportation if the pregnant woman has an exceptionally high risk of injuring herself or personnel.

Illinois, California, Vermont, Texas and New Mexico are currently the only states that have laws prohibiting the shackling of women in labor.

The American College of Obstetricians and Gynecologists and the American Public Health Association have condemned shackling because it causes severe pain and trauma, according to a legislative report released May 20 by Sen. Velmanette Montgomery (D-Brooklyn). The Center for Reproductive Rights stated that shackling prevents a woman from moving to alleviate contraction pains. This increases stress on the woman’s body and may decrease the flow of oxygen to her fetus. 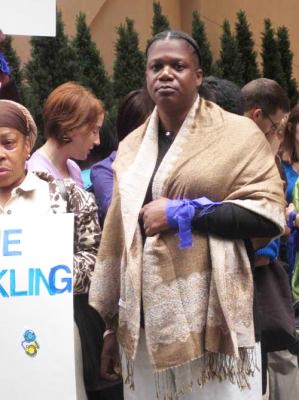 Additionally, Serena Alfieri, associate director of policy for the Women in Prison Project, explained that shackling often delays transportation to the hospital.

“Putting shackles around your ankles, arms and around your waist and connecting them to your arms is a process,” Alfieri said. “If you are in labor, that process could be torture for you.”

“We found that of the 66 local correctional facilities [in New York state], only three had written policies about the use of shackles and only two actually prohibited it altogether,” said Ami Sanghvi, a NYCLU staff attorney. She considers shackling women in labor a violation of the Eighth Amendment, which prohibits cruel and unusual punishment.

According to a statement released by rally organizers, prisons in New York City have restricted the use of restraints on incarcerated women during labor since 1990. Since then, there have been no reported incidents of escape or harm to medical or correctional staff.

“Shackling cannot be justified as a measure necessary to prevent escape: Women cannot run with any significant level of speed during labor or recovery after delivery,” the statement read.

“Being handcuffed took away from the special moment of my child’s birth and made me feel like less of a mother,” she said. “It was a very emotionally difficult experience.”

“Pregnant women who are shackled are at risk of injury during transportation to medical appointments, can suffer added pain during delivery, and may be deprived of appropriate care during examinations and delivery.

“Officials from the American College of Obstetricians and Gynecologists have opposed shackling on the basis that ‘physical restraints have interfered with the ability of physicians to safely practice medicine by reducing their ability to assess and evaluate the physical condition of the mother and the fetus … thus, overall putting the lives of women and unborn children at risk.’

“The risks are heightened by the fact that the pregnancies of women in custody are usually already high-risk because of their past medical histories, which can include substance abuse and limited access to prenatal care. In addition, the humiliation brought on by the shackling is inflicted on women who often have already suffered sexual or physical violence.”

Proclaiming that a woman in the midst of giving birth could constitute a flight risk would be laughable if it weren’t actually occurring. Treating these women so barbarically agitates underlying issues of mental and physical instability which could lead to premature deaths, damaged infants, and torn and mutilated mothers, and it rivals the torture practices being actively debated today.

Gov. Paterson, do the right thing and desist from this abhorrent practice immediately. We are all entitled to human dignity.