I finally made it to Gaza! 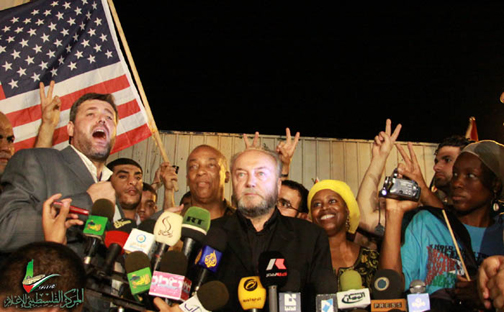 The Viva Palestina convoy, led by George Galloway, is about to leave Gaza after having been permitted to enter for a period of 24 hours after waiting 11 days in Cairo for permission to enter Gaza. That in and of itself is a major story when expanded to include the inability of Gazans to exit the Strip – even if only to enter another part of their country, the West Bank or to move about freely in the fictional “Palestinian state.” I say fictional because it continues to dwindle even while peace talks are underway. Fictional because Palestinian elections, deemed by international observers to be free and fair, don’t count if the U.S.- and Israel-approved party loses and the winners get to sit for years in an Israeli jail. Fictional because they use Israel’s currency here, the shekel, and the international roaming on our U.S. cell phones indicates calls are from Israel.

Gaza is beautiful. Gaza is full of life, despite Israel’s Operation Cast Lead. And now, I have seen, Gaza has been bombed to smithereens. No wonder the Israelis didn’t want photos taken!

In the meantime, my fellow Americans and citizens of the world, we have a lot to do to put right all the wrong things done in our name. Much love to all of you who helped me, guided me, prayed for me, to make this successful entry into Gaza happen.

The first time she tried to reach the 1.5 million Palestinian people in the Gaza Strip in desperate need of humanitarian assistance, the Israeli Navy rammed our heroic Cynthia McKinney’s humanitarian ship and forced them to turned back.

The second time her ship to Gaza was interdicted on international waters and former Congresswoman Cynthia McKinney was forced off the ship Spirit of Humanity and forcibly transported into Israel, where she was imprisoned for seven days.

Just a few days after being released from this Israeli prison in Ramle, and despite our nail biting anxiety for this lone Black woman’s safety, a woman wholly despised by the powers that be but still unbowed, yes, our beloved Cynthia McKinney bravely attempted, one more time, risking again her personal safety, to reach Gaza. This time, on the Viva Palestine U.S. caravan. And yesterday, July 15, 2009, on her third attempt, this time leaving from Egypt, after interminable hassles by the Egyptians and a denial of U.S. consulate help should the Israeli forces attack or imprison again the Gaza activists, her humanitarian convoy finally made it into Gaza with humanitarian supplies for the brave but suffering Palestinians.

Bravo, my dearest sister, bravo! Chapo ba, Cynthia, chapo ba! Hats off! You’re our hero, our model and agent for change in the midst of NO CHANGE, the deafening silence of Black leadership in America and a lot of posturing and rhetoric of all U.S. politicians and moral leaders, all equaling and sustaining the same old same old cruelties against the poor and plundered peoples. (See “A Crisis in U.S. Leadership.”)

Thank you for running to the darkness, my sister, and lighting the world as best you could for the hungry, terrorized, tired, torn and hopeless Palestinian people. Kapwa Lamo’s spirit is truly yours.

Among the 200 delegates who went on this mission of mercy with our Cynthia McKinney, to break the Israeli Gaza blockade and provide 1.5 million besieged Palestinians with humanitarian help – medicine, food, toys, building cement for hospitals, vehicles et al – were many brave Jewish Rabbis plus New York City Councilman Charles Barron and Dead Prez rapper M-1.

Hats off to all of you! You are truly our role models in a world of liberals, neoliberals and conservatives and neoconservatives, equally destroying humanity in the name of nationhood, profit and power. Hats off, beloved!

After days of maddening delays by Egyptian and U.S. authorities, on Wednesday the Viva Palestine U.S. caravan crossed from Egypt into the Gaza Strip, home to 1.5 million besieged Palestinians. Former Georgia Congresswoman Cynthia McKinney, New York City Councilman Charles Barron and Dead Prez rapper M-1 are among the 200 delegates who attempted to deliver hundreds of thousands of dollars in humanitarian aid. The Egyptians, who control the only non-Israeli entrance to Gaza, at the town of Rafah, reportedly prevented the activists from delivering some of the 47 vehicles purchased. 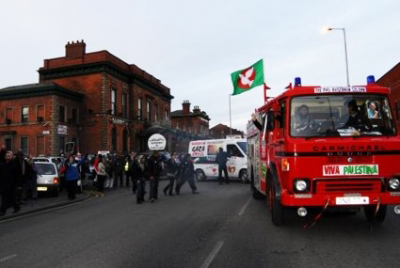 The activists have been warned they must leave Gaza in 24 hours or will have to stay until the Egyptians open the border crossing for normal business. The Egyptians have been helping the Israelis enforce a blockade of Gaza since 2007. The supplies are meant to aid recovery from Israel’s brutal December-January assault on Gaza in which at least 1,400 people died.

For McKinney, this is the third attempt to enter Gaza. She was a passenger in the relief vessel Dignity when it was rammed by the Israeli navy in international waters Dec. 30. The heavily damaged craft was forced to limp into a Lebanese port. Then, in late June, McKinney and 20 other human rights activists were arrested when their boat Spirit of Humanity was boarded by the Israeli Navy on the high seas. McKinney spent seven days in an Israeli prison before being released, but within days was on her way to join the Viva Palestina U.S. caravan, organized by British Member of Parliament George Galloway.

The American delegates were angered at the extent of U.S. government collaboration with Egyptian and Israeli efforts to frustrate the humanitarian mission. The U.S. Embassy required American citizens to sign papers waiving their right to protection by their own government should they enter Gaza.

The Egyptian government, which gets more U.S. aid than any foreign government other than Israel, harassed the convoy at every opportunity, roughing up delegates on the bridge at the Suez Canal. Meanwhile, two Israeli destroyers ostentatiously passed through the canal on Tuesday heading to the Red Sea.

Israeli sources say the warships are on a mission to stop arms smuggling to Gaza.

On Tuesday, McKinney and Barron sent the following letter to President Obama and Secretary of State Hillary Clinton:

“Viva Palestina U.S.A, a humanitarian relief effort for Gaza, is now in Egypt and requests your immediate assistance. We were supposed to have arrived in Gaza on Monday, July 13, 2009, but our arrival into Gaza was delayed because our departure from Cairo, Egypt was delayed by at least two days. Last-minute bureaucratic questions and additional requirements caused the delay. The people of Gaza can’t wait.

“You have noted that Israel’s siege of Gaza should be eased and medical supplies should be allowed in. We are implementing what you reportedly put into writing. The people of Gaza need your help and we have important assistance for them. Please contact the Egyptian authorities and ask them to let Viva Palestina U.S.A humanitarian assistance proceed through the Rafah crossing. We need your help today so that we can help the people of Gaza rebuild their lives devastated by occupation and brutal invasion.”

The largest humanitarian aid convoy in history to travel from the U.S. to Palestine succeeded in crossing the Rafah border into Gaza late today. After days of delay, the 218-person contingent of activists, buoyed by telegrams, emails and protests from many parts of the world, was finally allowed to pass into the besieged Palestinian enclave with more than $1 million in wheelchairs, walkers and medical supplies for the people of Gaza.

A genocidal attack on Gaza in December and January, on top of a two-year Israeli siege and blockade of the area, prompted British Member of Parliament George Galloway to organize the Viva Palestina caravans as a way to provide essential aid to a people under occupation who have been denied the most basic necessities of life.

The fact that this caravan hails from the U.S. gives it added resonance, as Israel is the largest recipient of U.S. government aid in the world. And Israel uses U.S. weapons and missiles against the Palestinian people on a daily basis.

To chants of “Viva! Viva! Palestina!” more than 200 members of the Viva Palestina convoy made it into the Gaza Strip Wednesday after spending about six hours at the Rafah border processing paperwork.

American Muslims for Palestine officials listened to the celebration via the cell phone of a Viva Palestina volunteer.

Before a crowd of Gazans, convoy organizer British MP George Galloway said: “We are saying to President Obama, the world is looking. The situation in Palestine is intolerable. You have to stop this. That means you have to take action because actions speak louder than words.

“I’m really proud to say that Viva Palestine USA helped to break the siege. We will cry out against the world … We will continue to bring convoys until the siege is finally ended.”

Israel’s two-year siege of the Gaza Strip has plunged the tiny area of 1.5 million people into a humanitarian crisis. And Israel’s three-week assault further devastated the area when the military bombed homes, schools, mosques, hospitals and universities. The attack killed more than 1,400 Palestinians, wounded more than 5,300 and left more than 50,000 people homeless.

From the ground, a Gaza resident said this convoy as well as others like it are essential tools not only in fighting the effects of the siege but to also raise awareness around the world about the plight of the Palestinians living under Israeli occupation.

The Viva Palestina volunteers will go to Gaza City today, where they will spend the night. On Thursday, they will meet with victims of Israel’s January assault before heading back to Cairo, Viva Palestina Director Kevin Ovenden told an AMP official by phone.

The current convoy, which first tried to cross into Gaza on July 11, faced numerous obstacles, according to Ovenden. The convoy left Cairo early Wednesday morning to make the 10-hour trek to Rafah. The convoy is taking two ambulances and 11 truckloads of medical supplies but has left behind hundreds of thousands of dollars’ worth of vehicles earmarked for hospitals and nongovernmental organizations. Egyptian authorities have refused to allow the vehicles to enter Gaza through its Rafah border. Currently, the sedans and pick-up trucks are in a secure location in Alexandria, Ovenden said.

After he returns from Gaza, Ovenden said he would remain in Egypt for several days to try to get the vehicles released. Israel wants the cars and trucks to be transported to Gaza through Israel, something Viva Palestina refuses to do, Ovenden said. Viva Palestina will take into account the desires of the thousands of individuals and organizations who generously donated to the convoy, he added.

“We are missing more than one-half (of the convoy),” Galloway told the crowd about the impounded sedans and pick-up trucks. “These vehicles are desperately needed. And I’m here to tell you they will be delivered one way or another.”

The American Muslims for Palestine calls on its supporters to continue to pressure the Egyptian government to release the vehicles by calling the Egyptian Ambassador to the U.S., Sameh Shoukry, at (202) 895-5400. Ask for the vehicles to be released and to be exported to Gaza through the Rafah border.

American Muslims for Palestine is a national grassroots organization whose mission is to educate the American public about the issues pertaining to Palestine and its rich cultural heritage. For more information, contact Kristin Szremski, director of media and communications, at (708) 717-4180.