At 8:00 in the morning on Monday, July 20, 10 Alameda County sheriff’s deputies arrived in their patrol cars in front of the tan house on the corner of 10th and Willow in West Oakland, the oldest African American neighborhood in the city, and one of the oldest on the West Coast. The renovated home is surrounded by an iron fence, and the sheriffs poured through its open gate and up the stairs.

Tasha Alberti had just left for work, for her job as a transportation services coordinator for Alameda County. Her children were still at home, though. Sheriffs told her adopted son Christian, a 9-year-old with autism still in his undershorts, to get dressed. Alberti’s daughter Sharquita rushed to collect the bottles and diapers she needed to take care of her nine-month-old baby Zmylan. All of them were then hustled out of the front door, down the steep steps, through the gate in the iron railings, and onto the sidewalk.

Sheriffs had threatened to evict the family before, an action stymied when a local locksmith, seeing that he was about to shut the family out of their home, had refused to cooperate. This time, however, a more compliant locksmith dallas tx, drilled out the door locks so the family couldn’t get back in. Other workmen nailed sheets of plywood over every window to keep the Albertis out. And a new brass and steel padlock was fastened to the gate.

Tasha Alberti and her husband James, a cancer survivor, had lived in the home with four children and two grandchildren for four years. Tasha had grown up in the same neighborhood, and had been househunting for a long time when she found the place in 2005. Although she was unemployed at the time, her mother had died and left her a little money. She talked with a real estate broker, who pushed her into a non-conforming loan with no down payment, with First Franklin Mortgage Services.

“I thought my loan was for $520,000, and that I’d be paying $2800 a month,” she recalls. “But I discovered that it was for $550,000, and the payment was much more.” Alberti got a union job with the county, though, where her husband had also worked. She barely made the payments. But then the monthly installments ballooned to close to $5,000. “I knew I couldn’t do that,” she says. “But when I tried to renegotiate them, they said that since I’d been paying before, they wouldn’t help me. So I stopped paying.” The loan went into default.

First Franklin, which moved from making normal mortgages to non-conforming loans back in 1994, boasted on its website that “First Franklin makes it easy for mortgage brokers to find flexible, hassle-free home loan solutions.”

The lender was bought by Merrill Lynch in 2006. Merrill Lynch closed in last year’s meltdown and was bought for $50 billion by Bank of America. Last week Bank of America reported second-quarter profits of $2.4 billion, it’s second straight profitable quarter since the mortgage crises started, despite losses from bad loans. No wonder. The bank received $45 billion in bailout money from the Troubled Asset Relief Program.

None of that money is going to the Albertis, though, despite promises that the bailout would enable the renegotiation of loans and keep people in their homes. Bank of America did, however, spend $2.3 million in 2008 on lobbying Congress and another $1.5 million this year. The bank wants flexibility on how it spends that TARP money, with fewer restrictions on huge bonuses for executives, on fees for credit card holders, and even on home mortgage lending to other Oakland residents.

When First Franklin’s “hassle-free solution” became her eviction, Alberti joined ACORN’s Home Defender campaign. Twice in May the sheriffs came to put the family out, and twice they met a resolute group determined to keep the Albertis from being dumped on the sidewalk. That’s undoubtedly why they swooped down without warning on July 20, just after Tasha had left for work. 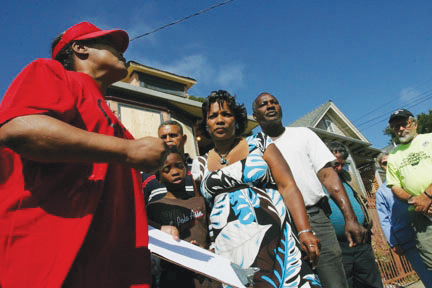 ACORN Home Defender Martha Daniels, who herself had been threatened with a foreclosure eviction, held an impromptu press conference that afternoon in front of the padlocked iron gate. She vowed, “We will find a way to put Tasha and her family back into this house. There is no justice here.” Representatives of city council members and a county supervisor announced their support.

As Tasha Alberti leaned on her brother and cried, though, her father Charles wondered: “There’s something wrong with this country. My daughter just needed a house for her family. What was she supposed to do?” he asked.

Help the family fight to take back their home

Activist Bill Chorneau writes: “If you have been outraged by the foreclosure scandal and waiting for the right opportunity to support families who are fighting back, please join this upcoming action. ACORN’s Foreclosure Fighters decided last night to escalate their tactics in response to the eviction of Tasha Alberti’s family from their home on Monday and they really need your support.

“Approximately 15 Oakland sheriff deputies surrounded Tasha’s home in West Oakland at about 8 a.m. last Monday, while Tasha was at work. They broke the lock on the front door and entered her home in a manner that terrorized Tasha’s children. One of her daughters is still showing signs of trauma after a sheriff’s deputy watched her get dressed. The deputies threatened to take the children to jail if they didn’t get out of the house. Luckily, nearby relatives were available to take in the children. The family is recuperating from this trauma and Tasha still wants to fight on.

“The progressive community must demonstrate that we will not sit by while financial pirates make loans that are designed to fail, then kick millions of families out into the street without regard to the human cost of their actions or the devastating impact on our communities. Many people are outraged that the banks continue to devastate our communities and our elected representatives have taken no effective action to stop them.

“This will be our biggest and strongest Home Defense Action yet, and now is the time for us to put our outrage into action. “We will be gathering at Tasha’s home at 1698 10th St. in West Oakland – corner of 10th Street and Willow – on Friday, July 31, at 5 p.m. Some people will be taking action to reclaim and reoccupy the home. Please email me at wchorneau@yahoo.com if you are interested in participating in this part of the action. Join us next Friday and reach out to your friends about this action.

“A good turnout could raise the anti-foreclosure struggle in the Bay Area to a new level. Join us in supporting the families that are fighting to save their homes.”

David Bacon is a Bay Area-based photojournalist documenting labor, globalization and migration. He is the author of “Illegal People: How Globalization Creates Migration and Criminalizes Immigrants,” which just won the C.L.R. James Award for best book of 2007-2008 by the Working Class Studies Association, “Communities Without Borders” and “The Children of NAFTA: Labor Wars on the U.S.-Mexico Border.” This story first appeared as a TruthOut Perspective. http://www.truthout.org/072709R For more of Bacon’s articles and images, visit http://dbacon.igc.org.