From San Francisco’s Fillmore, Hayes Valley and Western Addition, Black people and other members of the community of the poor were removed. The removal was a new form of segregation and discrimination. The government unit that led the charge was the Redevelopment Agency. The sociological name for this removal was and is gentrification.

San Franciscans, indeed Californians, will oppose segregation and discrimination in any form. Therefore, to succeed, it must be practiced below the radar. In our recent history, restrictive covenants were used to discriminate. The voters eliminated that practice once it was exposed.

Gentrification, the new form of segregation, works because the people are unaware of its pathology. News media will not publish any description of its practice. The mainstream media conspire to keep it hidden from the fair-minded voters of San Francisco.

Under the current San Francisco mayor, gentrification is being accelerated. The geography has changed. The only sites left for massive development are Hunters Point and Visitacion Valley. The removal of poor people has become high tech. The process for removal is more convoluted.

Public housing is under attack. Unfortunately, public housing occupies prime real estate. The Housing Authority, the Redevelopment Agency and the Mayor’s Office of Community Development are big players in the new gentrification. They all spend their discretionary money co-opting what might otherwise develop into leadership for real change.

In the 1970s, when gentrification was first introduced to San Francisco, the Redevelopment Agency was run by a White man named Justin Herman. Justin employed educated Blacks to stand between him and the community. These men were called area directors. They were the people who made the hollow promises. They actually believed that the displaced homeowners would be allowed to come back.

The agency allowed sham construction contracts to simulate community participation. Neither the Mayor’s Office nor other agencies funded CBOs (community based organizations). The building trade unions did not pretend to admit Black and unconnected whites into their hiring halls. There was no pretense at what is now called work force development.

Black contractors and other contractors of color were the only vehicles for community employment. The hiring halls were openly segregated. 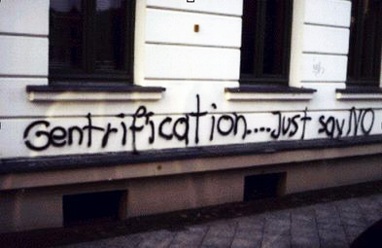 The game has changed. Those who run the city have become more sophisticated. The skilled craft unions have found many new ways to exclude the unemployed from earning a union card.

When construction was booming, hiring halls invited nonunion workers from other jurisdictions to work here, rather than train our unemployed. Workers poured in from right-to-work states. They were given traveling cards and allowed to work while our young people, deliberately excluded from the workforce, consumed dope and alcohol while watching others work. Now that work is slow, our young people are still not working.

Building trade unions in the electrical, plumbing, sheet metal, operating engineer and a few other fields have sold our politicians an employment deferment program. In addition they have and are selling a joke called the project labor agreement. Those who otherwise could and would help the unemployed have bought the pre-apprenticeship program.

The price that the unions paid was a promise to the politicians of reelection. It now takes longer to earn an electrical union card from Local 6 than it does to become a surgeon through medical school at the University of California at San Francisco. The union card is more rewarding. No student loans to repay. The starting wage is $85 per hour. With overtime and a leadership role, an electrician can make north of $200,000 per year.

Programs are the new ways to co-opt those who would be advocates for community-based change. Programs also give some hope to the hopeless. The city chooses who to support and whom to ignore. It supports those programs that show best.

Those programs that empower the community are starved. The workforce development programs are marginal. A few provide a path to a living wage. Most provide hope and promise.

Young people who dropped out of school without skill or education commit most of the crime in San Francisco and other urban cities. Rather than teach skills, we prepare them to learn a skill. Without skills and without education, they turn to crime and provide fodder for our criminal injustice system.

For the next few weeks this column will name and cite specific examples of the corruption involved in pushing the poor out of the city. Because this is a statewide issue, I plan to bring this issue to the attention of a few Southern California politicians. Congresswoman Maxine Waters and Sen. Rod Wright come to mind.

Joe Debro is co-founder of the National Association of Minority Contractors, a general engineering contractor and a bio-chemical engineer. He can be reached at Transbayd@aol.com.