by Tiny aka Lisa Gray-Garcia, co-teacher, poverty scholar and daughter of Dee 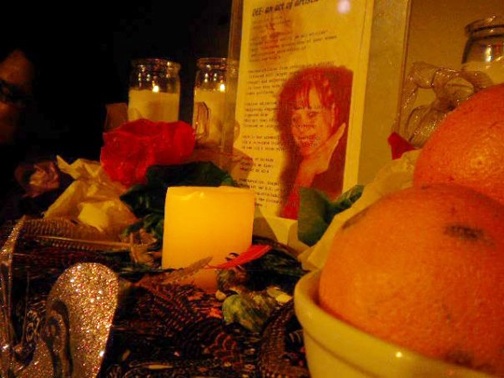 Herstory was made on Juneteeth (June 19th) 2009 at POOR Magazine’s Race, Poverty,Media Justice Institute at the Revolutionary Change Session. Through art, poetry, theatre and performance, redefined as education, seminar and experience, we deconstructed the lie of the budget cut, the harm perpetrated by the non-profit industrial complex (NPIC), introduced a new definition for philanthropy that includes community reparations and revealed the Manifesto for Change (see below), a new vision for thrival and the taking back and control of resources by indigenous and landless peoples all across the globe!

It was a beautiful event! Peoples enmeshed in academia and the NPIC were schooled by poverty, race, disability, youth, migrant and indigenous scholars about hundreds of years of repression, scarcity models based on the deserving vs. undeserving poor and conceptualized a new dream for thrival – not just survival!

On Monday, June 22, over 1,200 people showed up to City Hall in San Francisco and patiently waited to speak on the destruction of the proposed budget cuts. Many powerful advocates, scholars and revolutionaries organized to make sure folks came out to speak about the murderous blow of these cuts on our collective lives. Hundreds more, organized by CAP and LIFETIME, marched through the streets of Oakland to protest the proposed state budget cuts to welfare, healthy families and elder services.

These struggles and acts of resistance are all entwined – a woven quilt of revolution – the profit from pain at the NPIC and PIC (prison industrial complex), the pursuit of budget justice, the care-giving of our landless elders and children, and the struggle for poor mamas and daddies as they struggle to keep a tenuous hold on survival in corporate and capitalist Amerikkka.

Where do we go now? Yes, keep up the struggle for budget justice, but let’s look at another frame based in our own gifts, our thrival, not just survival – a plan of action to move off of the grid of philanthropy pimps, globalization pimps, non-profit pimps, to reject the lie of budget cuts, to reclaim our land and resources stolen from us so long ago!

Explore the Manifesto for Change (below), which includes the control of our own resources through multiple sweat-equity housing projects, micro-business projects, schools, own food growth and localization of food production. Reclaim our own care-giving, work, art and media.

If you are an organizer or poverty scholar fighting the lies of the budget cuts just to keep your family, your community or your organization alive, consider an alternative. POOR Magazine will be co-hosting a Potlatch for Pacha Mama in September. This gathering will explore and implement models of thrival not dependent on capitalist systems of abuse like the PIC (prison industrial complex) and NPIC (non-profit industrial complex) for poor communities of color, urban indigenous communities and landless peoples across the globe. For more information, email deeandtiny@poormagazine.org. 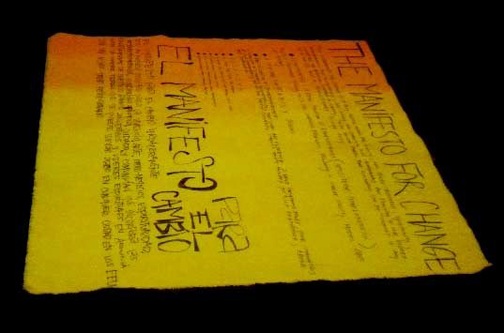 The Manifesto for Change is a truly “green” model for housing, art, micro-business, spirituality, interdependence, self-accountability, care-giving and community that incorporates the teaching of our elders, ancestors and spiritual leaders in harmony with Mother Earth that ultimately can be launched in any city in the U.S. with a Revolutionary Giving Ally.

This change document was introduced at the Revolutionary Change Session on June 19, 2009, as a template for global and local revolutionary change.

1. The Declaration of Inter-dependence

To act on indigenous values of accountability and care-giving with the goal of moving indigenous folks and poor communities of color permanently out of the Prison Industrial Complex, which includes po’lice dependence, abuse and destruction:

Through the RECLAIMM project, POOR Magazine is promoting a new form of indigenous, sustainable “green” equity and resource redistribution that will enable us to reclaim and build equity, support and promote micro-business, micro-economics and land ownership in our native urban communities.

Permanent housing units for landless* families and individuals, following a model of co-housing, which includes a home for all of the following components:

· A site for the F.A.M.I.L.Y. (Family Access to Multi-cultural Intergenerational Learning with our Youth) School, a revolutionary on-site child care and school for children and families in poverty, which incorporates a social justice and arts multi-cultural and multi-lingual curriculum for families and children 2 to 102 years old.

· A site for POOR Magazine, The Race, Poverty, and Media Justice Institute, Community Newsroom and all of POOR’s indigenous community arts programming.

Tierra Madre/Mother Earth: Following indigenous values of localizing food growth to cut down on greenhouse gases and poisoning of our communities, this will be a site for a “sustainable urban farm” to teach children and adults in poverty how to grow their own organic and healthy food to eat and to economically sustain their families, so that they can permanently get out of poverty. This will also provide an indigenous model of project-based learning for the FAMILY School – providing space for elders to teach indigenous forms of math and science through earth and agriculture.

A mixed use/C3-zoned, multiple units or loft space with adjoining land or small yard that has space for all of the activities listed above.

Fundraising will occur through an “equity campaign,” launched by POOR Magazine, which is an act of resistance to the hierarchal and unjust distribution of wealth and resources locally and globally. POOR Magazine is formally calling the fundraising effort for HOMEFULLNESS, an “equity campaign” instead of a “capital campaign,” conducted through equity sharing, not tied to financial resources. We will be creating permanent and lasting solutions to houselessness for families in poverty, who have been displaced, evicted, gentrified and destabilized out of their indigenous lands and communities.

*After years of struggling to be heard and housed and working to organize, de-silence and power the scholarship of poor folks of color and urban indigenous peoples, I, as a daughter of a disabled single mother of color of indigenous Boricua African descent, in a life-long struggle for land and equity, hereby refuse to use the codified, meaningless label of “the homeless people” and will instead identify our position as landless peoples.