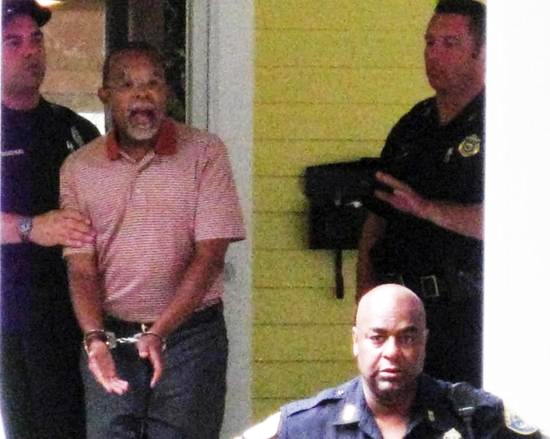 Harvard professor Henry Louis “Skip” Gates is arguably the most prominent Black intellectual in the U.S. On July 14, cops in Cambridge, Massachusetts, forced him to do a perp walk from his own home to a police car in handcuffs. The charge was disorderly conduct, but Gates’ real offense was being Black and unwilling to bow and scrape when ordered to do so by a white cop.

The cop responded to a report of a daytime break-in into the home Gates rents from the university and asked the professor to step outside. Gates refused to do so and demanded to see the cop’s ID. This challenge to the cop’s authority led to the arrest, which happened AFTER the cop had found out that Gates was indeed inside his own home! In this cop’s mind, a Black man questioning his authority and asking to see his police ID constituted “loud and tumultuous behavior” punishable by the humiliation of being taken from your home in handcuffs.

The charges have since been dropped, and the Cambridge Police Department has issued a statement saying Gates should not have been arrested. But this incident was very serious. Had Gates not been able to quickly call his secretary who got his lawyer down to the jail in short order, there’s no way to know what this could’ve escalated into.

Those who blame Gates for escalating the situation and causing his own arrest are saying he should’ve been more servile, with his head bowed and shuffling. These people either don’t know what all too often happens when cops confront Black people, or are trying to cover this reality up.

Black people are disproportionately stopped, harassed, beaten, arrested and even killed by cops. The Stolen Lives Project of the October 22nd Coalition to Stop Police Brutality documented over 2,000 cases of loss of life at the hands of police in the U.S. between 1990 and 2000. Most of the people killed were Black or Latino and most weren’t involved in any criminal activity when they lost their lives.

Some of the people this has happened to were well off, had played by the rules and done everything they were supposed to do to make it. Yet none of this mattered. Black people face inequality and discrimination in virtually every facet of life in this country. This oppression is built into the very fabric of this country, and it will take revolution and going on to build a whole new society to replace this messed up one to eradicate it once and for all.

Right wing talk radio, Fox News and other such forces were quick to charge racism in response to this incident – against Gates! These people were upset that Gates not only questioned the cop, but that he had the audacity to say he was being targeted because he was a Black man. They also took Barack Obama to task for saying during a news conference that the police acted “stupidly” in arresting Gates inside his own home.

There’s multiple irony involved in all this. Some of the very people who cite the election of Obama as proof that the U.S. has become a post-racial society respond to cops arresting a Black man in his own home by calling the Black man racist. At the same time, the president who has repeatedly lectured Black people to stop using racism as an excuse for the inequality and oppression they face gives a white cop a verbal slap on the wrist for the way he treated this Black professor.

Obama and his team felt compelled to address this only because he has been called out for carefully avoiding even addressing the hell Black people continue to catch in the U.S. Obama’s tsk-tsk to the Cambridge cops doesn’t address the seriousness of this incident. And this mild rebuke to the cops for this incident (which the White House began to back away from the next day with “clarifications”) in no way makes up for the way in which he has blamed Black people for the conditions the system he presides over enforces on them.

Obama’s “no excuses” speeches (see his speech at the recent NAACP convention for an example of this) have never been about tough love. The problem with them isn’t that they don’t go far enough. They go in the wrong direction! They say Black people face the problems they do because of their own faults and shortcomings. They cover over the oppression brought down on them by this system. And they threaten and justify the even more vicious attacks this system has in store for Black people.

What was done to Gates opens a window into the way this system oppresses Black people. This ugly and continuing reality needs to be fully dragged out into the light of day, and all who oppose injustice need to condemn it unequivocally and build opposition to it. And those who are sick and tired of it for real need to check out the revolution and understand that THIS system has always thrived on and reinforced oppression of Black people, in one form or another – never has, never can and never will create a society where Black men and women can truly breathe free, day in day out – and must be replaced with a revolutionary communist one where this and all other forms of oppression can finally be eliminated.

Carl Dix is a founding member of the Revolutionary Communist Party, USA. In 1970, Carl was one of the Fort Lewis 6, six GIs who refused orders to go to Vietnam. He served two years in Leavenworth Military Penitentiary for this stand. In 1985, Carl initiated the Draw the Line statement, a powerful condemnation of the bombing of the MOVE house in Philadelphia. In 1996, Dix was a co-founder of the October 22nd Coalition to Stop Police Brutality. In 2006, he coordinated the Katrina hearings of the Bush Crimes Commission. He recently participated in a dialogue with Cornel West at Aaron Davis Hall titled, “The Ascendancy of Obama… and the Continued Need for Resistance and Liberation” and was interviewed with Dr. West on Democracy Now. He can be reached through yipzzz@gmail.com.