Statements by Kiilu Nyasha, Wanda Sabir and Scott Braley on the plea settlements by Herman Bell and Jalil Muntaqim, the dropping of charges against all the others except Francisco Torres and the gathering Tuesday evening at Ella Hill Hutch Community Center 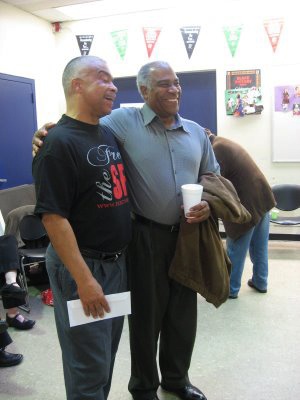 Herman Bell and Jalil Muntaqim are both well aware that there is no justice in the U.S. courts for us – there’s just us, as we used to say. Jalil did a great job of making sure all four co-defendants would have their charges dropped before making this decision that I know he did not want to make.

Nevertheless, I think that we can count this a small but significant victory, albeit bittersweet without the release of Herman and Jalil and with the continuation of Cisco’s (Francisco Torres’) case, which we expect to win or have the charges dismissed. For those who think this plea bargain is somehow a sell-out, this is definitely not the case. These brothers still have solidarity with one another and all recognize, as do I, that our fight cannot continue to rely on their system of injustice.

We are ultimately going to have to take it to the streets. In the process of fighting for our global liberation, we must demand the release of our political prisoners and POWs. This was accomplished in South Africa in the 1980s–‘90s. However, while South Africa got its political prisoners released, including Nelson Mandela, by letting that struggle become the main goal of the liberation movement, they lost sight of the real prize – an egalitarian, socialist society that would nationalize the nation’s cash cow, the gold and diamond mining industries, to finance universal health care, education, housing, etc.

Now the masses of South Africans are living in worse poverty than ever with no liberation movement and no Mkonto we Sizwe (Spear of the Nation, or military wing). We cannot make the same mistakes over and over again. The very life of the planet is dependent on us. Surely there are enough positive and negative examples of liberation struggles throughout the world – at this point in history – for us to be able to learn from their mistakes and successes, their defeats and triumphs.

The party Tuesday evening was fun. Many of the folks at the Ella Hill Hutch Community Center, by the time I arrived, were the same folks I’d seen at the courthouse yesterday. I was up all night Monday; I just couldn’t believe the verdict: All charges dropped for five of the six men who comprise the San Francisco 8, everyone except Francisco Torres.

I don’t think I’d ever been inside the building I’d admired for a long time. There are these great murals of community heroes and activists on the outside. I’m glad I arrived when I did, because I was able to catch Pierre Labossiere, and then not long afterwards Kiilu Nyasha made it by and we weren’t expecting her. She made my trek across the Bay totally worth it. In her sunshine-colored top, she lifted our spirits even higher.

As I stood speaking to an intern at Legal Services for Prisoners with Children, Courtney and her friend Amina, both graduate students, Amina at UCSF and Courtney at Brown, Richard O’Neal walked up and said, “I am SF 8.” I didn’t get it because I didn’t know him until he said, “I’m the other Richard,” and immediately I remembered his charges getting dropped in 2008. He was in jail nine months.

He was so bubbly. I loved his positive energy, really exuberant.

In speaking to Jalil’s attorney Daro G. Inouye, who works out of the San Francisco Public Defender’s Office (30 years now), this afternoon before heading to San Francisco, I understand better what he meant yesterday when he said Jalil did a noble thing when he took the plea for a lesser charge.

Prior to the prosecution’s offer, Inouye was set to file against the state for holding him on previous charges dropped for insufficient evidence. He was not in San Francisco when the alleged crime was committed and, since there was no new evidence, the state had no right to hold him for two more years. Inouye said Jalil was certain to have won the suit, but whether or not the other men charged in the SF 8 case would have had all charges dropped was not as easily determined.

Jalil’s change of strategy and use of what Inouye called a “calculated gamble” to plead no contest in exchange for the release of his co-defendants was something most of the men were not aware of, I found out tonight. Whether this move will jeopardize his freedom when he goes before the New York parole board was something Inouye could not answer. He said they would probably see how frivolous the case was and let it go. We’ll have to follow his case closely though and see.

Jalil did a noble thing when he pled no contest in exchange for the release of his co-defendants. His attorney, Daro Inouye, was set to file against the state for holding him on previous charges dropped for insufficient evidence. Jalil was not in San Francisco when the alleged crime was committed and, since there was no new evidence, the state had no right to hold him [i.e. Jalil would have been exonerated in the SF 8 case; he took the plea to free his brothers].

Inouye, who said when I spoke to him today that he is carrying a case load of 120 clients, had to decline my invitation to join us on the air the following day, Wednesday morning, July 8. Monday, July 6, he was working two courts and had to run after he savored the victory for a few minutes to handle another case. It’s too bad he doesn’t have a sister like Serena or Venus to help him keep the balls in the air and traveling, something the sisters did well Sunday at Wimbledon.

Cisco was in a great mood tonight, laughing with well-wishers and friends like Pierre from Haiti. Cisco is from Puerto Rico, though he was raised in New York. All the men are in great spirits, even those, like Ray, Hank and Richard Brown, who lost their positions or jobs when their lives were interrupted two and a half years ago. Mortgage payments have been late, pensions have been exhausted and retirees like Ray have to go back to work.

I can’t begin to imagine what’s going on with Cisco, whose ordeal is still not over. But optimism was the operative word here. Send support (money) to the SF 8 at www.freethesf8.org. The work is not over.

One supporter said the “Free SF 8” T-shirts which were on sale tonight will be collector’s items soon when the SF 8 are all released. We were chatting about milestones or victories like the one yesterday. I named a few recent ones like the court’s dropping the felony charges on 16-year-old David in the Oscar Grant case stemming from his leadership role in the downtown Oakland action Jan. 7. Other successes or victories were getting disabled inmate “Chuck” moved from Solano State Prison to the Medical Facility so he could use a wheelchair and the Louisiana court’s ruling in favor of Albert Woodfox of the Angola 3 this spring, even though a higher court overturned the ruling to release him on bail.

It was good seeing Maisha Quint, Javad, Donna Willmott, Linda Evans, Diana Block, Scott Braley and of course the men we were there to celebrate, the SF 8 – those absent, political prisoners Herman Bell and Jalil A. Muntaqim and the late John Bowman, present in our hearts. 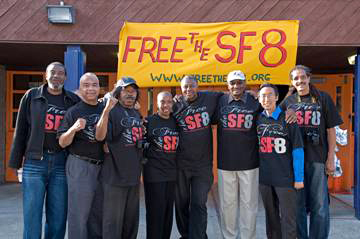 Big changes! Friends and supporters of the SF 8: After large and enthusiastic support demonstrations before court, Jalil Muntaqim and Herman Bell have made tactical pleas to reduced charges. Because of this, and because of two years of mass opposition to charges based on statements made under torture, Harold Taylor, Richard Brown, Ray Boudreaux and Hank Jones had all charges dropped. Only Francisco (Cisco) Torres still has charges, which he, the rest of the Brothers and the defense committee will continue to fight. With your support, we have almost defeated a case which has felt the full vindictiveness of the FBI, Homeland Security and the SFPD.

Scott Braley, a member of the San Francisco 8 Defense Committee and a photojournalist who has recorded the entire SF 8 ordeal, can be reached at scottb@igc.org.