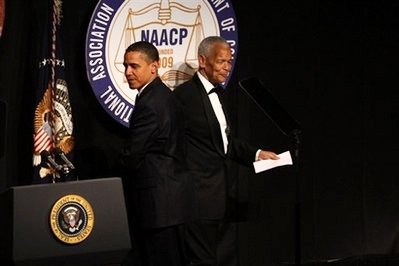 Speaking before a crowd at the centennial convention of the National Association for the Advancement of Colored People, he highlighted the need for government action to help tear down these barriers.

So it was a surprise to see this headline on the New York Times story covering the event: “Obama Tells Fellow Blacks: ‘No Excuses’ for Failure.”

Somehow the Times saw fit to dismiss Obama’s meaningful acknowledgement of continued discrimination and, instead, portray his speech as a dose of “tough love” to Black America.

The Times was not alone, though. The Huffington Post, a purportedly more liberal outlet, titled its article “Your destiny is in your hands … ‘No excuses.’”

It is true that President Obama borrowed a page from the book of Black leaders as diverse as Dr. Martin Luther King Jr., the Rev. Al Sharpton and Minister Louis Farrakhan in outlining the need for Black self-empowerment. But it was a damaging oversight to ignore the president’s recognition of systemic inequality and the policy solutions he laid out to reform these systems.

The president pointed out that the African American community still suffers from discrimination and is disproportionately hurt by a recession and the boom/bust economy that has broadened economic inequality throughout the country. He included policy proposals ranging from changes to tax policy, health care, education and housing to improve the condition of African Americans.

One of the most repeated themes in Obama’s address was that the nation’s racial inequality is not an African-American problem, but rather a problem of our entire nation. Yet if you read the New York Times, you’d think the president was simply scolding African Americans for failing to live up to their potential.

I had hoped for more from the leading newspaper in the country. Not only should the Times have reported on what Obama actually said, but as is done concerning other important policy matters, it should have also examined whether Obama’s prescriptions were adequate for the ongoing racial economic divide.

As someone who studies the racial economic divide, particularly between African-Americans and whites, my strongest criticism of the address is that Obama’s policy solutions are not strong enough to overcome the structural inequality suffered by African Americans. African Americans have only 10 percent of the wealth of white Americans and they are segregated into the most disenfranchised communities. On top of that, their job loss rate has been far higher than the rest of American’s during our current economic crisis.

When I first read President Obama’s address to the NAACP, I had a mixed reaction. I was glad to have a president who saw government responsibility for the structural inequality developed through decades of discrimination. At the same time, I found myself disappointed that he did not advocate for stronger measures, like an equity assessment of all future federal spending to ensure that government funds do not solidify the racial economic divide.

Yet after reading news coverage of President Obama’s address, I realized that his discussion of structural inequality is beyond what most Americans are prepared to deal with, or at least beyond what The New York Times sees as news that’s fit to print.

Dedrick Muhammad is the senior organizer and research associate for the Program on Inequality and the Common Good at the Institute for Policy Studies. Dedrick’s special area of focus is the domestic racial wealth divide. He can be reached at Dedrick@ips-dc.org.