AIDS is an epidemic that we hardly talk about in the Black community, and that is a dangerous thing when we are dropping like flies from it all over the world. To all of the readers, I would say adults but adults aren’t the only ones having sex, think about the last time that you had unprotected sex with someone. BAM! You could have have contracted HIV that fast. If that would have happened, you traded in your health and life for an hour of fun? How intelligent is that? And be clear although I’m writing this for the readers, I am at the same time talking to myself so I am not coming from no holier-than thou pulpit.

Longtime radio producer Anita Johnson of KPFA’s Hard Knock Radio has been working on a project based in educating people about HIV and AIDS. Check her out as she gives us some info that we all need to pay attention to.

M.O.I. JR: You recently have been doing a lot around AIDS and HIV. How did you get into this work? What motivated you?

Anita Johnson: At the beginning of the year, I was awarded a grant from the Public Radio Makers Quest 2.0, an initiative of AIR, the Association of Independents in Radio, Inc. This project is made possible with funding from the Corporation for Public Broadcasting. MQ2 selected eight individuals to help shape the sound of public radio using new technologies and creating interactive content that would engage people online.

My submission was to develop a web site that would allow for young people under 25 to share their perspectives and personal stories of living with HIV. For four months, I’ve been working with four HIV-positive youth helping them to bring their HIV reality to a larger audience.

We look forward to providing HIV-positive youth with a platform that allows them to share their thoughts on issues such as living with HIV, disclosure of status to family and friends, housing, emotional and mental struggles associated with living with the virus, developing intimate relationships and the decrease in funding for people living with HIV/AIDS. Our website is www.beyondtheodds.org.

Anita Johnson: I’m working with four extremely bright and strong individuals all under the age of 26. Each one of our participants is HIV-positive. Two of the individuals are living in a temporary shelter and the other two individuals live with their families – three young men and one young woman.

M.O.I. JR: Can you give us some stats? Who is catching HIV and AIDS?

Anita Johnson: Well, disproportionately the African American community is impacted by HIV/AIDS. In our communities it’s referred to as Black AIDS or Black Plague. Women and girls are one of the fastest growing groups of newly infected HIV-positive individuals. With regards to young people, every hour, one or two young people under 25 become infected with HIV in the United States, according to the CDC (Centers for Disease Control). Every nine and a half minutes someone is infected with HIV in the U.S. And one out of five individuals is HIV-positive and doesn’t know they’re positive. This information can easily be located by logging onto our site, www.beyondtheodds.org, or www.cdc.gov.

Also it’s important to emphasize that the individuals who are contracting HIV are heterosexual and homosexual. Basically, it’s impacting folks who aren’t practicing sexual safety. 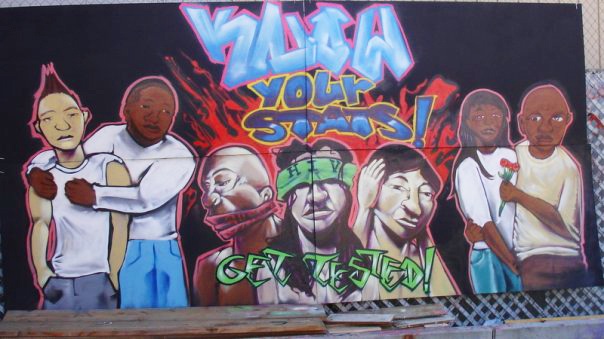 M.O.I. JR: What is the difference between HIV and AIDS?

Anita Johnson: According to the Centers for Disease Control and Prevention, HIV (human immunodeficiency virus) is the virus that causes AIDS. This virus may be passed from one person to another when infected blood, semen or vaginal secretions come in contact with an uninfected person’s broken skin or mucous membranes. In addition, infected pregnant women can pass HIV to their baby during pregnancy or delivery, as well as through breast-feeding. People with HIV have what is called HIV infection. Some of these people will develop AIDS as a result of their HIV infection.

This information can be accessed on our site, www.beyondtheodds.org. Also people can locate a HIV testing center in the area on our site.

M.O.I. JR: Do you feel like the average person knows enough about these two conditions?

Anita Johnson: Not at all.

M.O.I. JR: What has struck you most since you got involved with this project?

Anita Johnson: Each of their stories. Also what’s resonated with me personally is the strength exhibited by each of our young people. None of them are tragic. They’re resilient and focused on their individual message and the information they wish to share with other young people. None of the youth want what happened to them to happen to another young person. It’s about iniating conversation with the people we’re involved with sexually.

Also, I’ve learned from B-Lady, one of our participants that her boyfriend knew his status and didn’t share that information with her because, in his words, “She didn’t ask if he was positive.” See, people are not talking about those realities, especially young people. That’s why this project is so important and timely.

We need to communicate to our youth and listen when they talk. Here’s an opportunity for us to hear their stories and respond and support their truths. This information can benefit us all, the whole community, and put us in a place of acceptance, responsibility and accountability. HIV is taking us out, killing us – or leaving a biological underclass of people that are dependent on the state. It’s serious.

M.O.I. JR: How does the public access your work?

Anita Johnson: People can access my work by going to www.beyondtheodds.org. Also become of Facebook fan of Beyond the Odds at www.facebook.com/beyondtheodds. Remember we need the community to support these young people and their stories. Also, if you are under 25 and HIV-positive or know a young person who has HIV, have them submit their stories, thoughts and perspectives to Beyond the Odds. They can email us at beyondtheodds@gmail.com. Thank you so much, JR, for such a great interview.