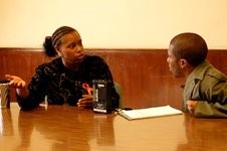 The SF Bay View newspaper is in dire financial straits, and former presidential candidate Cynthia McKinney is bailing us out with her stimulus plan that comes by way of the Triumph Tour through Northern California that is being organized as a series of fundraisers for a very essential media outlet that amplifies the people’s voices in times of need and in times of triumph.

She will be speaking in Oakland on Aug. 20 and 21. She will be in Sonoma County on the 22nd, in Frisco on the 23rd and in El Cerrito on the 24th. A listing of the main events appears at the end of this story, and additional information and updates are posted at the top of the Bay View homepage, at www.sfbayview.com.

I wanted to interview People’s Advocate Cynthia McKinney before she got here so that our readers would know what to expect from her when she touches down. So here I bring to you one of the most courageous former members of the federal government ever in the history of this country, Cynthia McKinney in her own words.

Cynthia: I’m doing fine. It’s been a long ordeal, but I look forward to coming to the Bay Area and meeting a lot of people – old friends – and making new friends.

M.O.I. JR: Just to get into it, we talked a little bit a few weeks ago about the second time that you went to Gaza. Can you tell the people what you are coming to the Bay Area to do?

Cynthia: Well, the San Francisco Bay View newspaper is one of the very few newspaper outlets in the Bay Area that actually seeks to inform its readership. It presents the facts. And they also provide an opportunity for me to get my message out. They don’t mind covering me. They don’t subject themselves to any kind of censorship, and they are not under threat or attack from the censors. However, they are under threat from the financial crisis that grips all of us right now.

M.O.I. JR: What is the importance of independent media, particularly in the case of your trips, but also in the scope of your career?

M.O.I. JR: Can you talk a little bit about your recent activities? You’ve been involved very heavily in this Gaza movement. And I know that in December it was your first time to the Middle East, and I know that the Israeli military, the Israeli navy rammed your ship and destroyed the ship that you were on, and basically they looked like they tried to kill you and the other people that were on the ship before you were rescued.

I know the second time the Israelis tried to pirate you into Israeli waters where they eventually took you to jail, and you spent a week in Israeli prison. And finally this third time, a few weeks ago, you finally made it to Gaza through Egypt where you and Charles Barron had to do a lot of negotiating on the border between Egypt and Gaza. Can you speak a little bit and fill in the blanks and tell the people a little more about why you were doing what you were doing and basically what exactly happened?

Cynthia: Well, basically after the spontaneous demonstrations erupted all over the country and actually all over the world as a result of the Israeli military taking us captive and putting us in prison for seven days – there were 21 of us who were aboard the Spirit of Humanity, which is a Free Gaza boat – as a result of that, there were several nationals from the United Kingdom who were a part of that, and so the matter was covered in the British press and was also debated on the floor of the House of Commons that Israel had committed an act of piracy against us, and also kidnapping. And we were in international waters.

Now, the member of Parliament, George Galloway, who had successfully organized the Viva Palestina UK Convoy that arrived in Gaza in March of this year, had also decided that he would do a Fourth of July, you know sort of spirit of America Viva Palestina USA Convoy, and it would go through Egypt and into Gaza. Well, we got into Gaza for 24 hours, but the humanitarian assistance, much of it did not get into Gaza.

So they waited a total of 11 days. I waited several days, and then finally we were given the go ahead after a series of very intense negotiations. The vehicles, a half a million dollars worth of trucks and cars that Galloway had purchased, thanks to the donations of the people in the United States, well, they were not even allowed to leave the Alexandria free port in Egypt. So they never got there to Gaza, and we are uncertain about the extent of the rest of the humanitarian assistance and whether or not it even got to Gaza as well.

But I was able to get inside and see. And I could tell you that I understand why Israel does not want people to see what they have done to that beautiful, beautiful land. The houses have been all shot up. There were mortars that were fired into some of the homes as well. Some of the homes were burned out.

There were school buildings: I visited the American School, international school in Gaza. It was completely demolished to rubble, and I found a book there. M1 and I went together with a local Palestinian and a Palestinian-American woman who carried us around and toured us and showed us some artifacts from the school.

And then we went to an elementary school, and this just showed the cruelty of war because – well, I shouldn’t even say war because it is really one-sided. You know the military operation, that the Israelis have M16s, helicopter gunships, white phosphorous, depleted uranium. They have nuclear weapons, they have nuclear triads and the Palestinians don’t have any of that.

So it’s not nearly even in any sense of the word because there is no self-determination for the Palestinians there. There is no right of return. We met people who, were it not for the Viva Palestina Convoy, they wouldn’t be able to get in.

They couldn’t go back home, Palestinian Americans. Then of course there were people who we met that live in the West Bank and they wanted to get into Gaza, and they couldn’t get in. There was a man who was at the Rafa crossing – he had a U.S. passport; his entire family had U.S. passports. He had the U.S. passport with him, and the Egyptians nor the Americans would allow his family to come out. They’re in Gaza and they’re trapped in Gaza.

So I was able to go there and see the complete and utter devastation. In one school, the school was completely demolished, and we went inside a classroom and I saw several cans of peanuts. And I saved them because I thought that the children were eating the peanuts, and I picked up one and I saved it, and then someone looked at the can and said that’s Hebrew on the can. And after the school building was completely destroyed, then the Israeli soldiers went and had a snack. It’s just amazing; it’s absolutely totally amazing.

And this is the dehumanization process that occurs on both sides when you’re involved in something like this. This is a result of U.S. policy, and U.S. policy hasn’t changed. Now a lot of people thought that they were voting for change when they voted for Barack Obama, but we have seen that on torture, rendition for torture, spying against U.S. citizens, the change in the occupant of the White House really hasn’t made a difference.

M.O.I. JR: No doubt. I agree 100 percent with you. Last but not least, what should the people expect to hear from you on this fundraiser for the Bay View newspaper tour?

Cynthia: Well, I definitely intend to bring the things with me that I was able to obtain while I was in Gaza. And I hope to be able to show photographs. I took a ton of photographs and a ton of video.

But I think what is equally important as what I saw, I think it is important for us to discuss where we are going to go next. What are the options that are available to us, given where we are now as a country and the things that are happening today?

If the issue is the healthcare debate, I have a tragedy that is unfolding within my own family. And many of the people that know me and who have visited with me and supported me in California know about my aunt. She has been with me at every step of the way. My aunt went in for a routine test for her doctor – and she does have very good health insurance – and she has been in intensive care now for a week, because the doctors made a mistake.

And so what is it that we should expect from our government? It is clear that we have some issues that we need to discuss. Healthcare is not the only issue, but healthcare is our bodies. It is our lives. And so we deserve to have more from our elected leadership than what we are getting.

Celebrate, support and join Cynthia McKinney at every stop on her Triumph Tour, Aug. 20-24!

Please spread the word about the following events – details are at the top of the SF Bay View homepage, at www.sfbayview.com:

No jailing of journalists!

Join Cynthia McKinney for the very first stop on her tour – attending the preliminary hearing on the ridiculous, trumped up charge of felony arson of a trash can against her good friend, POCC Minister of Information JR (who is the one to thank for organizing Cynthia’s Triumph Tour).

You’ll recall he was arrested by Oakland police, who know him well as their most severe critic, while on assignment Jan. 7 for the SF Bay View, covering the first Oakland Rebellion following the execution of Oscar Grant. Charges have been dropped against nearly all the 100-plus arrested that night – but not JR. The OPD still has not returned his camera, and they’re still determined to railroad him into prison.