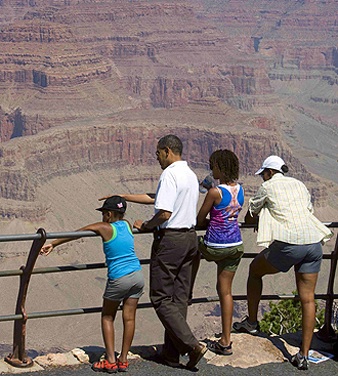 In his run up to the election, Barack Obama frequently invoked the legacy of Abraham Lincoln and his theory of bringing powerful but opposing personalities together in order to govern better.

At the time, no one spoke of the unthinkable possibility of another obvious connection to the Lincoln Administration. Now it is openly discussed.

In retrospect, therefore, you’ve got to give Mrs. Lincoln some love.

On April 3, 1865, Richmond, Va., the capitol of the Confederacy, fell to union forces, effectively ending the Civil War.

The following day, in Washington, D.C., President Lincoln, with members of his family and others, boarded a small naval vessel to travel to Richmond to personally walk the streets and assure the residents of their safety.

That same evening Lincoln stood on a hotel balcony and spoke to the assembled crowds below. Even though Lincoln had decidedly racist views concerning Blacks and considered promoting a 13th Amendment that would have made slavery legal for perpetuity if it would have averted war, that night Lincoln urged the vote be extended to the newly liberated Africans.

Elizabeth Keckley, who viewed the scene from inside the hotel, standing to the rear of Lincoln, was horrified. Keckley, who previously had been enslaved, was a close companion of the president’s wife, Mary Todd Lincoln. Keckley told Mrs. Lincoln she must try never to allow such a scene to happen again. “Anyone could have taken a shot at him,” she said.

Mary Todd Lincoln responded there was little she could do and she “had premonitions” something terrible was going to happen.

Many are having Mrs. Lincoln-like premonitions these days.

Recently we have been informed that President Obama has received more death threats in a shorter period of time than any president since the organizing of the Secret Service, in the immediate aftermath of the Lincoln assassination.

The recent violent and furious protests by armed sign carriers at town hall meetings, called to discuss health care reforms, recall not the democratic discussions New England used to be famous for so much as distant white protests against civil rights reforms. Cartoons disparaging the president and his family bring to mind an earlier time when Blacks were routinely ridiculed in the nation’s press.

The Rush Limbaughs, Glenn Becks, Lou Dobbs, Anne Coulters, Sean Hannitys etc. etc. who routinely pollute the television and radio airwaves have proven themselves true acolytes of the 1930s fascist Father Coughlin, the “Father of hate radio,” and are themselves the oracles of hate television. The “birthers,” those delusional white folks who so hate the idea of a Black president they invent their own “reality” in the form of fake birth certificates and claim the president wasn’t born in the U.S. and is therefore ineligible to be president, protesters carrying signs calling for the death of Obama, Michelle and the children, Black politicians’ offices being painted with swastikas, the president labeled a nazi, a communist, and Republican Party threats that similar tactics will be used in upcoming debates on immigration reform – all this appears against a national media backdrop of a full television menu, ranging from “Whale Wars” and “Dog the Bounty Hunter” to the “First 48,” television viewing that promotes racial and ethnic intolerance. The tinder box of political tensions is ignited and simmering.

This is the “democracy at work” that a handful of white liberals, notably including San Francisco Mayor Gavin Newsom, dismiss not only as harmless but productive.

Mayor Newsom and others seem not to recognize a new downward ratcheting of Republican Party strategists, a downward spiral from the so-called “Southern strategy” of the Nixon years and beyond, when the Republicans manipulated white fears toward civil rights gains for African Americans and others to a newer and even more mean spirited strategy that could be called the Randy Weaver recruitment plan.

Randy Weaver was the evangelical former Green Beret, Aryan Nation sympathizing wing nut who was in a shootout standoff with the federal government in 1992 at Ruby Ridge, Idaho.

Though few invoke Randy Weaver’s name, the allusions could not be clearer.

The hatred and anger we see spewing forth at the health care “discussions” – and which we are led to believe will be duplicated at any immigration reform discussion – is based on a fundamental mistrust of government that was first fueled during the civil rights movement and gradually stoked to its current white heat intensity by the Howard Jarvis-Paul Gann-like tax reform initiatives that spread across the nation in the late 1970s. These tax reform initiatives helped lay the basis for the current fiscal crises now experienced by virtually every public political entity in the nation.

Many within the Republican Party appear appalled at what’s happening.

However, anyone who’s followed the career and seemingly inexplicable popularity of former Alaska Gov. Sarah Palin, Randy Weaver in pumps, witnessed the ease with which she describes herself as a “redneck woman” and notes the racist populist enthusiasm of her denigration of the federal government can see that a sizeable portion of the Republican Party has gone far beyond what senior Republican strategist Ed Rollins lamented on election night past when he said, “We’ve become the party of the Deep South.”

In 2008, the Republican Party at its national convention of 2,500 delegates boasted all of 75 African American delegates. (Numbers of Latino delegates appear not to be available.) In addition to proving that white folks have no monopoly on political self-delusion, these numbers reflect how totally and absolutely the Republican Party is out of step with modern needs of the multi-racial electorate of the U.S.

Those charged with securing the safety of the president say all that is needed to set of a conflagration (presumably a euphemism for the unthinkable) is a spark.

Meanwhile from the Left, there is barely a whisper. From those who were so quick just a year ago to accuse Michigan Congress member John Conyers of treason for not attempting to impeach Bush there is virtual silence. Significant numbers of Black progressives engage in studious navel gazing as they debate whether or not Obama is good for Black people. Organized labor, at a time when it could have tremendous influence in charting a progressive path, is disorganized.

There is no joy or delight cataloging the darkness that seems to be descending on the U.S. political scene. However, the atmosphere has now become so charged, it is rarely possible to criticize Obama on his weaknesses and failures without adding fuel to the fire in progress.

If the unthinkable should become real, that would surely unravel the American project as we know it.