Secretary of State Hillary Clinton heard from a broad cross-section of Congolese society about how the United States can play a constructive role in bringing an end to the conflict and supporting local Congolese institutions. 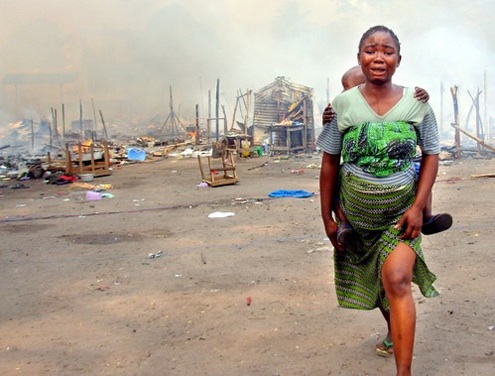 Below is a letter from elected officials in the South Kivu province – one of the two most affected provinces by the wars of aggression against the Congolese people – that captures the essence of what many Congolese have argued since the first invasion in 1996. The world community cannot say that there are no answers or that the problem is too complex to comprehensively address.

The Congolese people have the answers and they have articulated them to the global community and world leaders. The question is, will Secretary of State Hillary Clinton, President Barack Obama, and the world community listen and respond accordingly? Early indications are that they are not inclined to listen to the people as the US is deploying more military advisers to the Congo through its continent-wide discredited AFRICOM program as they did in February of this year.

We, members of the National Parliament, elected representatives of the people of South Kivu, welcome your visit to our country and request that you convey our best wishes for success to the current tenant of the White House on the occasion of his election as the head of the USA.

We take the opportunity given to us by your presence in the land of our forefathers to bring to your attention that the DR Congo that you visit so far is not only affected by the result of wars of aggression unjustly imposed on our people for almost 15 years, but is also a country where the democratic process led by the United Nations is bogged down, thus bringing into question the credibility of the United Nations in a country that throughout its history hasn’t ceased to be subjected to this huge organization, in both World Wars I and II and the Cold War. 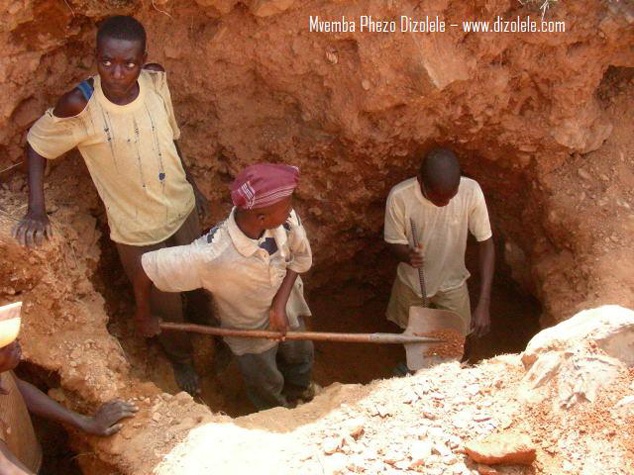 That is why, at first, we urge the Obama administration to consider the following two points:

1) On behalf of thousands of women raped or buried alive, men emasculated, and all those killed in eastern DR Congo in general and in South Kivu in particular, we urge you to join our voices to demand an end to impunity. First, by the immediate arrest of all those responsible for this tragedy including Laurent Nkundabatware, Bosco Ntaganda, and other accomplices at the heart of this Congolese tragedy.

In so doing, in the eyes of the world community, the USA will have contributed to bringing an end to this unjust and biased policy that ensures the longevity and support of regimes whose leaders have been accused of abusing power and lacking democracy characterized by extreme favoritism concentrated in a handful of people at the expense of the majority of the inhabitants of Central Africa.

Also, today we can confirm to you that the eastern DR Congo has become an oasis for the extermination of innocent people who are defenseless and without any assistance, in the presence of an army that consists of selectively picked executioners which includes former FDLR (Democratic Liberation Forces of Rwanda) members repatriated to Rwanda, but recycled and then returned within the CNDP (National Congress for the Defense of the People) for their incorporation into the FARDC (Armed Forces of the Democratic Republic of Congo).

In short, a war of attrition is managed wisely and thoroughly fed through the plundering of our resources, the depopulation of areas affected by this war, and very soon their balkanization.

2) This policy has led to the strengthening of mono-ethnic powers in Rwanda and Uganda, where more or less 10 percent of the population maintains dominance over 90 percent of the population. It is important to point out that with the support of the USA and the UK primarily, Rwanda released its tribal hatred on the DR Congo where its support and participation alongside pseudo-insurgent movements are undeniable.

Indeed, the involvement of multinational corporations in the delivery of arms and plundering the wealth of the DR Congo in the interest of great powers on one side and on the other, the cases of Mutebusi, Nkundabatware, Bosco Ntaganda, and the flagrant presence of many Rwandan soldiers in the integrated CNDP troops in support of Rwanda confirms our assertion.

Madam Secretary of State, your trip to Africa in the early months following the ascension to power by His Excellency Barack Hussein Obama is followed with great interest and has generated a lot of hope among the Congolese people who have been overlooked by previous U.S. administrations; it has not been since the 1990s that a personality of the American administration of your rank has set foot on Congolese soil.

That is why, in addition to the major concerns outlined above, we share with you a copy of a memo that we gave to members of the delegation of the Security Council of the United Nations who visited the DR Congo on May 19, 2009 – a memo which tells the tragedy suffered by the Congolese people. This memo can be summarized as follows:

“Since 1994, the superbly armed Hutu, fleeing the advance of the Rwandan Patriotic Army, crossed the Congolese border with support of U.N. operations called “turquoise,” headed by France. These Hutus settled in the provinces of North Kivu and South Kivu in flagrant violation of all international standards governing the right of asylum or refuge.

Known as the “Interahamwe” or FDLR, Democratic Forces for the Liberation of Rwanda, and so on, these Hutu particularly stand out in DR Congo by practicing acts of looting, rape, massacre and so on. And since they became a pretext for the authorities in Kigali to justify the presence in DR Congo of their regular army, the results are the current massacres and atrocities suffered by our people at Makobola, Kasika Katogota, Lemera, Nindja, Kaniola , Kalambi, Bunyakiri, Kaziba, Luhwindja, Kalonge, Bukavu, Uvira, Kiliba, Katumba Kalehe, Bwegera, Kamituga, Mwenga, Shabunda, Lugushwa, Ngando, Ndola, Kigulube, Bijombo, Masango Tubimbi, Kakungwe, Mushago, Kitutu, Lubuga , Mutambala, Fizi, Minembwe, Bibokoboko, Baraka, Kagabwe, to name a few, as regards the South Kivu.

Moreover, Rwanda’s history is punctuated by cyclical and fratricidal wars driven by a spirit of intolerance and retaliation between Hutus and Tutsis. Hence, when it is the Rwandan Tutsi ethnic group that is in power, their countrymen who are in the majority, the Hutus, are in exile, and vice versa. DR Congo has become each time the country of pilgrimage for them.

Therefore, we members of the National Parliament representing South Kivu not only condemn the guilty silence of the international community, particularly the USA, nation par excellence that praises democracy and peace, but we also deplore the role of international organizations specializing in defense of human rights that are not quite vocal as elsewhere regarding this tragedy of a smoldering Congolese genocide.

Solutions for the return and the restoration of peace have been explored by the Congolese government, but unfortunately they came up against the bad faith of external forces pulling the strings of this war in cahoots with some insiders.

These include, by way of illustration:

The meeting in Sun City in South Africa called the inter-Congolese dialogue which led to the transition 1+4 [post conflict reconciliation formula that integrated former rebels into the Congolese government from 2003-2006, which included one president and four vice presidents], the Conference of Goma in January 2008, and most recently the joint operations of DR Congo and Rwanda for the tracking of FDLR.

The joint operations are replete with collateral damage in North Kivu and South Kivu, where we deplore all loss of life coupled with other incalculable consequences: large-scale movements of populations, famine, disease, evil destruction of property and infrastructure, looting of natural resources, rape, theft and other degrading treatment.

Rather, the Congolese people, your brother, friend and ally, do not deserve such inhumane treatment. They have done everything to restore peace in the Great Lakes Region. They have nothing left to give to satisfy the warmongering and gluttonous appetites of their neighbors. The Congolese people had vainly obeyed and accepted fallacious schemes and pretexts that served as the basis for the imposition of unjust wars: the case of nationality, access and sharing of political and military power, establishment of a genuine multiparty democracy, mixage, integration for some, brassage for others [mixage and brassage are French security sector jargon that speaks to the integration and reintegration of rebel groups into the Congolese army], repatriation of Rwandan refugees, tracking of FDLR elements etc.

Faced with this grim picture, we, national MPs from the Province of South Kivu, on the strength of our experience and our solidarity with the people who elected us, believe that peace won at the end of the gun barrel is always ephemeral.

Therefore, for a secure and lasting peace for all parties concerned in the sub-region of the Great Lakes, we offer among others the following proposals:

1. That the international community require of President Paul Kagame the organization of an inter-Rwandan dialogue that would bring together around one table all the components of the Rwandan tribes, both those inside and outside of the country, to find solutions to internal problems between them.

2. The involvement of the United States of America for the establishment in Rwanda of a democracy balanced, thoughtful and non-discriminatory like the position (which we positively welcome) of your current government response to conflicts between Israel and Palestine. This is for the restoration of a lasting peace, on the one hand among Rwandans themselves on their soil and between the state of Rwanda and the DR Congo on the other hand.

3. The contribution of the USA in the strict regulation of the sale, delivery and purchase of arms and munitions to leaders implicated in the conflict in the Great Lakes sub-region, essentially Rwanda and Uganda.

5. The establishment of international justice (ICC) that punishes all political leaders and economic players in the sub-region or elsewhere involved in the war.

6. The establishment of a development plan, like the Marshall plan, with pragmatic integration projects in the sub-region of the Great Lakes in general and in the east of the Democratic Republic of Congo in particular.

7. The involvement of MONUC (United Nations Organization Mission in DR Congo) in first sorting out the Rwandan elements integrated within the CNDP so that they can return to their country, Rwanda, and second in assisting with removing military officers of all stripes involved in the armed conflict outside the provinces of North Kivu and South Kivu.

8. The redefinition of the mission and role of MONUC in order to avoid the atrocities and abuses deplored above.

9. In the end, we members of National Parliament representing South Kivu hope that your stay in our country, unlike the bitter and sad experiences (political, diplomatic, economic, commercial, social, cultural, humanitarian …) we have experienced, is the time to lay the foundations for sincere bilateral cooperation that will be beneficial for both the American and Congolese people.

Thus, in the framework of this cooperation that we hope will be reciprocal and harmonious, and taking into account the geostrategic position of the DR Congo, we recommend that the Obama administration deal directly with Congolese institutions legally established in place of intermediaries or subcontractors.

National Members of Parliament of South Kivu presented in Kinshasa on Aug. 5, 2009:

Break the silence! Become a friend of the Congo, 1-888-584-6510, http://friendsofthecongo.org/action/index.php. This letter was translated by Friends of the Congo.