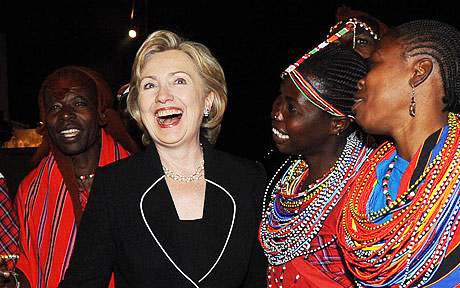 During a press conference at the U.S. Embassy in Nairobi, Kenya, on Thursday, Aug. 6, U.S. Secretary of State spoke of her upcoming visit to the Congo: “I’ll be in Goma,” she said. “And I will be there primarily to speak out against the unspeakable violence against women and girls in eastern Congo. It is the worst example of man’s inhumanity to women.” Friends of the Congo sent Secretary Clinton the following letter urging her to emphasize the reason for this inhumanity and to address the cause and not only the effect.

We would like to thank you for traveling and showing your commitment to the end of conflict in the Democratic Republic of Congo. Your support is invaluable and your dedication to regions of the world that are disenfranchised is a necessary catalyst to end the suffering of the people in Congo.

Understanding that there is no military solution to the resource war in the Congo, we urge you, Secretary Clinton, to offer United States leadership in calling for a comprehensive political process that includes Rwanda, Uganda, Congo and rebel forces currently inside the Congo.

We applaud your focus on the horrors of the conflict in the Congo by addressing sexual and gender based violence; however, such violence against women is a direct result of the resource war. The United States can play a key role in bringing an end to the conflict through aggressive diplomacy and by joining Sweden, Canada and The Netherlands in being constructively engaged in a sustained effort to usher lasting peace and stability into the region.

In accordance with the Carter Center and United Nations recommendations, we urge you to call on United States corporations to abide by OECD (Organization for Economic Co-operation and Development) guidelines in dealing with the Congo and not be party to the fueling of conflict or odious contracts that disadvantage the people of the Congo.

It is vital that United States policy support civic and grassroots efforts and institutions in the Congo in their attempt to democratize the Congolese political space and provide support for the men, women and children afflicted by the war.

On Tuesday, Aug. 4, Kambale Musavuli, national spokesperson and student coordinator for Friends of the Congo, was interviewed on Flashpoints by host Dennis Bernstein on what Secretary Clinton’s Congo policy should be. Flashpoints, KPFA’s daily investigative news hour, is heard on dozens of stations around the country.

“I was pleased to hear (Secretary Clinton) has taken on the issue of gender-based violence,” he said, “but if I were an adviser to her, I would be sure she would connect the raping of the people with the raping of the resources of the Congo. … We cannot watch 6 million people killed in the heart of the continent and yet do nothing about the corporations fueling the conflict. We cannot see 500,000 women raped just to get to the resources found in our cell phones, yet not hold the corporations accountable.” The interview begins 33 minutes into the show.

To learn more about Friends of the Congo’s work with Congolese women, visit http://www.friendsofthecongo.org/reports/women.php.