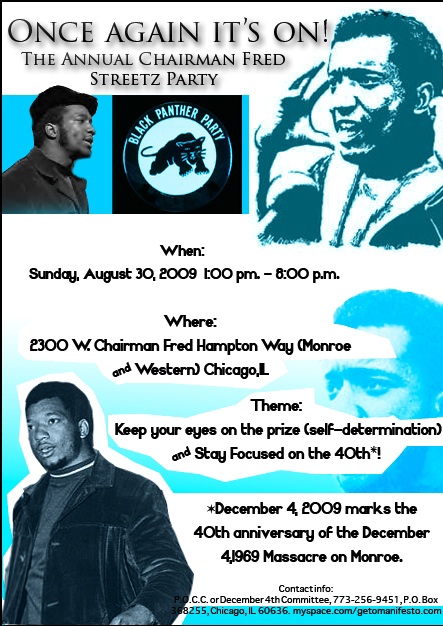 On July 23 the Prisoners of Conscience Committee (POCC) kicked off the “You Can Kill a Revolutionary … But You Can’t Kill the Revolution Tour” in Oakland, California, the birthplace of the Black Panther Party. There was a showing of the film “The Assassination of Chairman Fred” at the Black Dot Cafe in the Village Bottoms neighborhood to a full capacity crowd. Jack Bryson, whose two sons were next to Oscar Grant when he was murdered by BART police in Oakland on New Year’s morning 2009, was the featured speaker along with one of Oscar Grant’s uncles, “Uncle Bobby.” They talked about their feelings surrounding the case and upcoming court dates.

The purpose of this on-going POCC tour is to educate and re-inform people of one of Black people’s “September 11ths,” “The Massacre on Monroe,” when 21-year-old Deputy Chairman Fred Hampton and Defense Captain Mark Clark of the Illinois chapter of the Black Panther Party were assassinated by the U.S. government via the Chicago Police Department on Dec. 4, 1969. This year is the 40th anniversary of this act of government terrorism on U.S. soil. The POCC also uses current local campaigns against police terrorism to expose how nothing has changed from the ‘60s, even under a Black president.

On Friday, July 24, POCC Chairman Fred Hampton Jr. spoke at a D-Lo and Sleepy D concert in Hollywood informing the artists and crowd about the POCC’s Code of Culture. On July 25, the tour made its way to the Kaos Network in Leimert Park in Los Angeles. After the film, Chairman Fred Hampton Jr. hosted a Q&A to a standing room only crowd that was sprinkled with LA Panthers and other community workers. In LA, the chairman tied into his speech the comparison of the police assassination of Chairman Fred and Defense Captain Mark Clark and compared it to the police killings of Deondre Brunston and Donte Story in the area.

The next day, Chairman Fred hosted a poetry reading at IMIX Books, where he read some of the spoken word pieces that are on his debut spoken word cd “The Ghetto Manifesto.” Later on that day, the POCC hooked up with rapper and actor Mos Def at the London Hotel, where we showed his crew a short from one of the POCC’s newest media projects, the new flick “Operation Small Axe,” which documents the Block Report Radio show as it deals with the police murder of Oscar Grant, the Oakland Rebellions and the police murders of Lovelle Mixon and Parnell Smith among other things.

That Monday morning, on the tour’s last day in Los Angeles, Chairman Fred was interviewed by Dominique DiPrima from 5:00 to 6:15 a.m. on KJLH’s “Front Page.” The interview with Dominique was only supposed to last one hour but the next host was late to work. The late host was none other than the soul legend and KJLH owner Stevie Wonder. He asked the POCC if we could stay because he was so intrigued by Hampton and DiPrima’s conversation that he wanted to interview Chairman Fred himself also.

After the 40-minute on-air interview, Stevie Wonder left the mic in the middle of his morning drive time radio show to talk privately about politics with the POCC delegation. When we’d finished talking, he gave us and his employees some catered breakfast from a local Black restaurant.

On Tuesday, the POCC doubled back to the Black Dot in West Oakland and showed the flick “The Assassination of Chairman Fred” and were joined by former the Black Panther Party Finance Minister Melvin Newton, brother of party cofounder Minister Huey P. Newton. On Wednesday, July 29, Chairman Fred was the featured speaker and poet at the Air Lounge’s Mouth Off weekly spoken word event in downtown Oakland. To a full house, he shared some of his spoken word after he gave the audience a history lesson on “The Massacre on Monroe.”

On the 30th, the POCC and Sisterhood Sisterz hosted a “Ghetto Manifesto Listening Party” at the Ibota Lounge near Lake Merritt in Oakland, which also featured the wordsmith Trak the Entertainer. The next night, in the Mission district of San Francisco, Chairman Fred hosted another Q&A after a showing of “The Assassination of Chairman Fred” to a very mixed group of people at Station 40. Members of the Haiti Action Committee and Lavalas were in attendance. Fallen freedom fighters Njumbe and Father Jean Juste were acknowledged for their contribution to the struggle.

The first California leg of the tour was highly successful, and the POCC is excited about bringing this tour around the planet before Dec. 4, 2009, which will officially mark the 40th anniversary of the assassinations that took place on the West Side of Chicago.

The tour will be going to Texas and Illinois next. So you can email chairmanfredjr@gmail.com if you are interested in bringing this tour to your school, cultural center or community.

Chicago – The Prisoners Of Conscience Committee (POCC) and the December 4th Committee are hosting the annual Chairman Fred Hampton birthday celebration on Sunday, Aug. 30, 2009, at 2300 W. Chairman Fred Hampton Way (2300 block of West Monroe at Western Avenue) from 1:00 to 8:00 p.m. Fred Hampton was the deputy chairman of the Illinois Chapter of the Black Panther Party when he was assassinated on Dec. 4, 1969, along with Defense Captain Mark Clark of Peoria, Illinois, at 2337 W. Monroe.

Had he lived, Chairman Fred would be celebrating his 61st birthday.

Dr. Margaret Burroughs, historian, educator and founder of the DuSable Museum of African American History, will be the keynote speaker. POCC Chairman Fred Hampton Jr., born three weeks after the brutal assassination of his father, and Akua Njeri (fna Deborah Johnson), December 4th Committee chairperson, widow of Chairman Fred Hampton and survivor of the “Massacre on Monroe,” will address the group throughout the day. Supporters and attendees national and inter-national – from as far away as Sweden – will join the survivors of the “Massacre on Monroe,” the family of Defense Captain Mark Clark, and spoken word artists and performers participating in this annual historic event.

Keep your eyes on the prize – self-determination – and stay focused on the 40th! Dec. 4, 2009, marks the 40th anniversary of the brutal assassinations of both Hampton and Clark.

As it should be