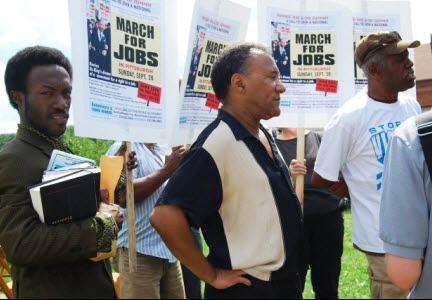 As the G-20 summit prepares to descend upon Pittsburgh, the city has been thrust into the spotlight and is being highlighted for its “commitment to employing new and green technology to further economic recovery and development.” It has been and is being denoted as the city that got it right, where pollution has been eroded, the rivers cleaned and the jobs in industry thoroughly replaced.

But this is farce. The changes are superficial and the most oppressed workers have not recovered from the loss of steel jobs; this fact is most clearly seen in neighborhoods like the Hill District.

While the dignitaries that represent the G-20 countries are shown a “revitalized” downtown, they will not see the conditions of neighborhoods that surround downtown Pittsburgh.

As far as gatherings go, the starkest contrast in Pittsburgh during the G-20 Summit week will be between the glamour and glitz of the summit, the primped and polished downtown hotels where world leaders and finance ministers will stay on the one hand, and on the other, the Hill – about a mile away from the G-20 Summit convention – where those protesting unemployment will be sleeping in a tent city.

Following a march for jobs on Sunday, Sept. 20, protestors will live on the Hill throughout the week until the end of the G-20 summit. The Hill is one of the oldest, poorest, most renowned and besieged African-American neighborhoods in the country.

Once known for its nightlife and jazz clubs, today the streets of the Hill – where famed playwright August Wilson was born – have more than a few boarded houses and failed restaurants, small businesses and neighborhood stores. Parts of the Hill look more like the poorest neighborhoods in Port-au-Prince or the Gaza Strip than a U.S. city. 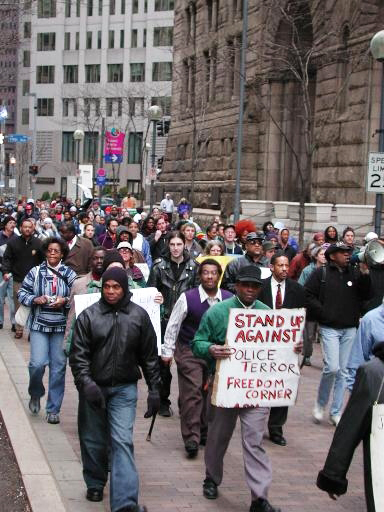 Most young people of working age who live on the Hill are not only unemployed; most have never had a job and there are fewer and fewer low wage jobs available to them. From as far back as the mid-1950s, real estate interests have been working hard to push the native poor and working-class inhabitants out of the Hill to make way for the more well-to-do. While that process is not over, the rich, right now, are winning the war for control of the Hill.

I was not born in Pittsburgh but in another part of western Pennsylvania – Erie , Pa. – where the conditions are different but similar. I was born in 1976 and spent my first 15 years there. My parents worked in factories, my mother making ceramics and my father still for GE Transportations, where he is anticipating retiring after 40 long years making locomotives and locomotive parts.

Both of my parents migrated to Erie from southern Mississippi. They were in their late teens and neither had a high school education. During the period when my parents migrated from the South, there were many thousands more Black people who did the same, fleeing the repressive and racist conditions in the south in hopes of better paying jobs and better social relations.

By the time I became cognitively aware, conditions in western Pennsylvania and eastern Ohio had already begun to change. The well-paying jobs in the factories were beginning to dry up and working people in what has now become known as the Rust Belt were being cast off from their jobs in the tens of thousands as deindustrialization set in, sweeping the land like a foreboding cloud of doom.

I can recall the looks on the faces of children I attended school with. Their parents would lose their jobs and though as children we could not completely comprehend the consequences of our parents’ unemployment, the despair on their faces was enough. It’s like a child who falls but looks around for the reaction of the adults before deciding whether to laugh or cry.

I was not aware then – few of the children of factory workers really were – of what was happening in Pittsburgh, the shuttering of steel plants because of technology or outsourcing. Pittsburgh is much larger than Erie and has a richer history of struggle but is also a city that had long been under the sway of the Mellons, Carnegies and other super-rich who made their fortunes off of the exploitation of working people, even hiring armed thugs like the Pinkertons to shoot down striking workers.

Pittsburgh , like Erie and most U.S. Midwest cities, where 20 percent of the population is Black, is largely segregated. But at least Black people had the Hill. Back in the day, the Hill was the place that Black steelworkers could make a better life for their families than their parents could make for them. The hope of those on the Hill who are trying to hold on to all they have is that the jobs march and tent city will help them even the odds a little against the gentry.

People from as far away as North Carolina, New York, Miami, Detroit, Minneapolis and even California will be meeting on the Hill in front of Monumental Baptist Church at Wylie and Soho Street at 2 p.m., Sunday, Sept. 20, for the march for jobs. The marchers, who are expected to be in the thousands, will march to Freedom Corner at Crawford and Centre Street, where there is a monument to civil rights activists and leaders.

After Black residents were pushed out of what was once called the lower Hill to make way for the development of a stadium, Freedom Corner is where the Black community rose up and proclaimed that the developers would not be able to push beyond that point.

Freedom Corner is where thousands gathered in the summer of 1963 to board buses to travel to the historic civil rights march in Washington, D.C. It is also where angry and shocked people gathered on that terrible day in April 1968 when Martin Luther King Jr. was assassinated. There could not be a more appropriate location in Pittsburgh for the jobs march to rally, because it was Dr. King’s vision of a second civil rights movement, a movement for the right of all to decent paying jobs, that the civil rights leader dedicated the final weeks of his life to.

The goal of the jobs march is to revive that vision. After the rally, many will return to Monumental Baptist Church , the site of the “Bail Out The Unemployed” tent city, to get ready for their first night underneath the sky.

For an updated schedule of events, transportation details and more information, go to Bail Out the People Movement website. For California bus info, call (323) 306-6240.

We need your help:

Larry Hales is youth organizer for the Bail Out the People Movement. Agreeing with New York Times columnist Bob Herbert that youth jobless statistics are “beyond scary; they’re catastrophic” and that the Sept. 20 Pittsburgh March for Jobs is right on time, he says, “Young workers, in particular youth of color, are demanding meaningful jobs and education, not jail or the military.”