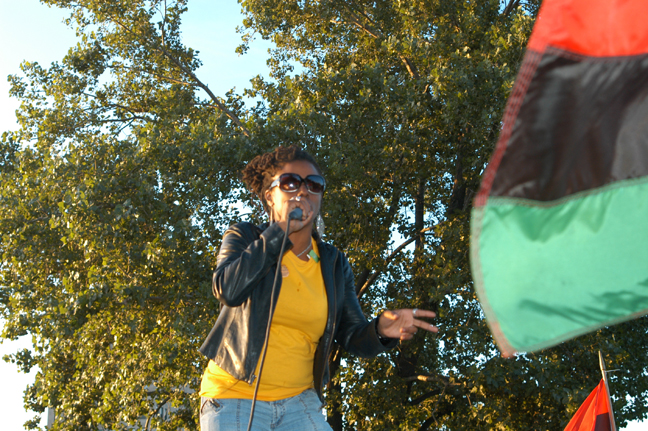 This beautiful event is celebrated all over the world, but from my experience, can’t nobody do it like the Chi (Chicago). Due to the national nature of the SF Bay View, it is important for us to cover events and campaigns from around the world that can lend a hand to our education and understanding of the war that has been and is being waged against us. Here I talk to a Chicago member of the Prisoners of Conscience Committee, Kazi, to get an update of what went on at this year’s celebration in Chicago.

M.O.I. JR: What is the Chairman Fred Hampton Street Party? And what is its importance?

Kazi: The Chairman Fred Hampton Street Party is an event organized by the December 4th Committee and the POCC in which people from all around the world gather together at Ground Zero – the address where he was assassinated – to commemorate his legacy. The event takes place on his birthday, which is Aug. 30.

The celebration is very important because it brings people in the community and abroad together and lets his murderers – the state – know that neither he NOR the atrocities which were enacted on December 4th will NEVER be forgotten.

M.O.I. JR: What were the highlights from this year?

Kazi: Dr. Margaret Burroughs delivered the keynote address at the event. Dr. Burroughs is the founder and curator of The Dusable Museum of African American History, which is the first and oldest museum dedicated to the study and conservation of African-American history, culture and art. She has been a longtime supporter of Chairman Fred and his legacy.

The POCC also performed their annual “Revolutionary Ritual,” in which they hijack the current street sign that adorns the block (Monroe) the event is held on and replace it with Chairman Fred’s street sign, Chairman Fred Hampton Way. NewSense from the critically acclaimed group PsychoDrama delivered an awe-inspiring performance which literally brought her to tears as she performed a song touching on how the Chicago Police Department murdered her baby’s father.

M.O.I. JR: What artists were in attendance?

Kazi: Phenom and Rhythm from Poetree Chicago, NewSense from PsychoDrama, O.G., VonJovie, King of Chicago, Skoochie and Kazi The Blak.

M.O.I. JR: How did the POCC feel when it was over?

Kazi: To quote Chairman Fred Sr. “Hiiiiiiiiiiigh off the People”!

M.O.I. JR: How do people stay in contact with the POCC in Chicago?