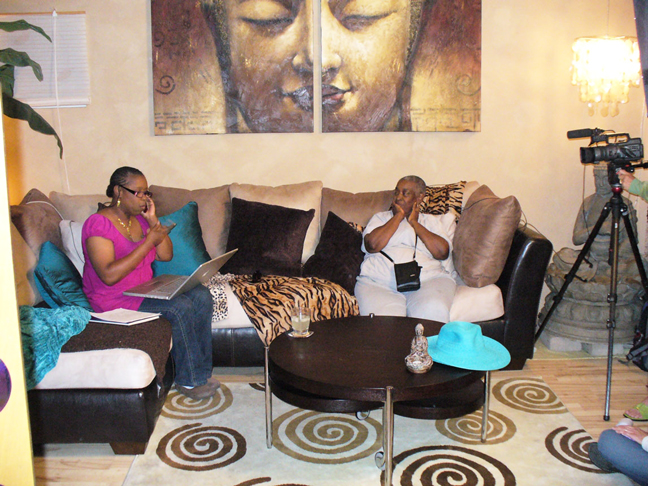 I never want you to take the journey that I’m currently on. So, I want to tell you about it.

It starts on the front of the refrigerator: “The Healthiest Foods on Earth,” a two-page primer from apple to watermelon, touting issues from immunity to male fertility support. Inside the refrigerator: natural and organic foods only. On the countertop is the Jack LaLanne juicer, the Magic Bullet, the handy food chopper plus, the food saver vacuum sealer – all items familiar to us because they are constantly hawked on the midnight cable channels. Hanging from the kitchen cabinet door are plastic bags for recycling: one for plastics, the other for aluminum cans. The house and car are filled with reusable shopping bags made of recycled materials.

By the way, a new car was in the works, and not because of the cash for clunkers program of the federal government. An American-made hybrid was preferred – keeping U.S. workers working. In the back seat of her Ford Focus is a booklet, “Living in a Healthy Body: A New Look at Health & Weight.” What I’m trying to describe is someone working very hard at changing a typically indulgent “American” lifestyle into one more respectful and healthy for the body, healthy for our earth.

So, in an act of preventive medical care, my Aunt Hazel went to the doctor to have a colonoscopy. We are all bombarded with television commercials advising us to have a colonoscopy. I know in the Black media, those ads abound. And so, dutifully, my aunt abided by those suggestions for healthy choices and had her first colonoscopy. What the family knows is that her colon was perforated. That’s when our journey took us on a wrong turn.

Unfortunately, the facility that performed the colonoscopy had told my aunt not to call before the results were published and that would take up to two weeks! When my aunt called them because she was feeling so bad, they told her to go to sleep, she’d be ok overnight and they would call her in the morning. The hospital talked to her and her daughter.

But my aunt-tee continued to deteriorate so badly that her daughter called 9-1-1 and by the morning, my aunt-tee was already in surgery at another hospital that was not too busy to care for her. This is when the perforation was discovered and repaired.

My aunt-tee deteriorated after the transfer, but fought like heck to live. Unfortunately, her body had been so poisoned by the doctor’s failure to recognize that he had perforated her colon that her body became toxic.

The third affront to my aunt-tee’s health and life occurred when morphine was administered, ostensibly for pain, and gave her such a blow to her vital organs that the family objected to a second administration of morphine. But guess what! She was given morphine again, despite her children’s complaints! My aunt never recovered from that.

My aunt, a divorced mother of two, struggled to live righteously. Those of you in Southern California know that she accompanied me almost everywhere I went. She was a hard-working woman, a proud homeowner in Watts, a student working on her social work degree, finally able to achieve her dreams after deferring them for so long in order to help her children realize theirs.

Two steps forward always seemed to end with one step backward. If we got the money appropriated, in too many instances, Black institutions couldn’t be in charge of it, so only a trickle at best reached the community. I found that the “plantation” was alive and well in patterns of federal spending.

So when Dr. David Satcher, President Clinton’s surgeon general, found in a 2005 study that over 83,000 Blacks die unnecessary and premature deaths each year due to their treatment after they arrive in a doctor’s office, among other factors, I added that datum to my panoply of quality-of-life stats. And now, my aunt factors in Dr. Satcher’s numbers.

Having seen much betrayal and lack of principle in the current “health care” debate, I had no intention of getting into it. In our Power to the People campaign, I wrote a platform that included policy recommendations to eliminate all disparities still extant in our society, including for health care.

A single-payer system is so obviously needed, it should be too politically costly for our Democratic majority in the Congress and our Democratic White House to do anything else. I recommended an end to war. I advocated public ownership of the Federal Reserve.

I even anticipated the skullduggery of the bailouts and recommended that if the “powers that be” were intent on forcing Congress to give these bailouts to institutions that conducted what I would call criminal behavior, then at a minimum, a credible person like David Walker, former U.S. comptroller, should audit all corporations and institutions receiving such funds. I suggested that Sen. Obama use the power of his senatorial pen to amend the bailout legislation to this effect. It didn’t happen.

“A single-payer system is so obviously needed, it should be too politically costly for our Democratic majority in the Congress and our Democratic White House to do anything else.” – Cynthia McKinney

Once she decided that it was necessary to step outside of the box of political conformity, she discovered that there were Independent, Green Party, Libertarian and other political party candidates on her ballot that she had long ignored. She began to listen to them and learned to explore the totality of her options. It was glorious to watch my aunt-tee’s liberation.

So why is she in the morgue now?

Not enough people took that journey with her. Not enough people saw her example. Not enough was done to change policy. At a time when the policy makers have never been so divorced from the reality borne by the average citizens that they govern, the American people have shown an amazing ability to accept graft, corruption, death and destruction while continuing to believe that hope alone can produce real change. Why did Cindy Sheehan protest without thousands in front of President Obama’s $50,000 a week vacation home?

I’ve tried to walk my talk. Just last week it came out that one “journalist” who called for my lynching was on the FBI payroll at the time of his comment. He claims to have been paid to say provocative things. I’ve withstood a lot – for the people. But now, I really don’t know how much more walking or talking I’m able to do. I just wonder, how many more will have to experience this before more people write their own Declarations of Independence from this political disorder.

The phone just rang and it was the hospital that performed the botched colonoscopy on my aunt, that ignored her call for help, that demanded she be transferred while she was in intensive care, that administered morphine twice, despite objections from the family and from which her vitals never recovered. They wanted to know how my aunt would rate their service. I told them poor on every count.

Thank you for reading this with empathy and I thank you all for your support. I apologize for any appointments that I’ve missed while I’ve been on the road to this place I’m in now.

P.S. My friend, David Josué, wrote a beautiful notice that I include in this message. Please click on the link at the end of his message because “dying while black” is real. My aunt is just the latest victim. The highlights are mine:

[Sept. 1, 2009] It is with a heart full of sorrow that I have to inform you of the death of Cynthia’s maternal aunt. Hazel was not sick and took all preventive measures to live a long life. She went to have a colonoscopy and her colon was punctured. What else went wrong during the procedure is still unknown to the family.

Hazel survived Jim Crow but could not survive the health care system. Cynthia is deeply affected by this tragic event. She was very close to her aunt and Hazel loved her niece. Hazel was a fervent supporter of Cynthia’s six terms in Congress and was so happy to see her niece run for president of the United States in 2008.

Only last July the 4th she was in Atlanta with us while we were working around the clock to secure Cynthia’s release from an Israeli jail. It is hard to accept that she is no more.

For news from, by and about Cynthia McKinney, former Georgia congresswoman, 2008 Green Party presidential candidate and current candidate for executive director of the Pacifica radio network, subscribe to her updates at http://lists.allthingscynthiamckinney.com/listinfo.cgi/updates-allthingscynthiamckinney.com and check these websites: www.livestream.com/dignity, http://dignity.ning.com/, www.twitter.com/dignityaction, www.myspace.com/dignityaction, www.myspace.com/runcynthiarun, www.twitter.com/cynthiamckinney and www.facebook.com/CynthiaMcKinney.