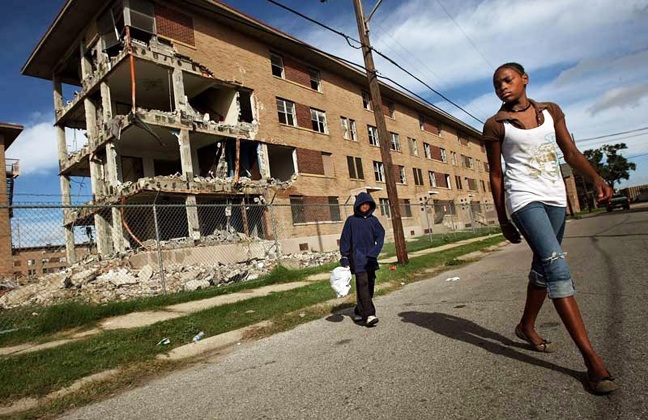 New Orleans – Congresswoman Maxine Waters, D-Calif., wrapped up two days of hearings by the House Subcommittee on Housing and Community Opportunity, which she chairs, by focusing on the status and availability of affordable, quality public housing due to the near total demolition of the “Big Four” public housing developments in New Orleans following Hurricane Katrina. After the hearing, Congresswoman Waters, panelists and other guests participated in a bus tour of the Big Four sites – B.W. Cooper, C.J. Peete, Lafitte and St. Bernard – and visited the future site of a new public housing development in Iberville, which may be the next development to be demolished and redeveloped.

“From what I heard during today’s hearing and from what I saw during the bus tour, I continue to have many concerns about the availability and affordability of quality public housing in New Orleans,” said Congresswoman Waters. “I steadfastly opposed the destruction of these housing units after Hurricane Katrina because I saw what was coming down the road: an explosion in the number of homeless New Orleanians and the daunting task of rebuilding from scratch. The decision to destroy thousands of these units has done little to help individuals and families in desperate need of housing.”

Following Hurricane Katrina, the number of homeless people in New Orleans doubled and the average cost of rent increased by approximately 50 percent. The destruction of the housing units in the Big Four, rather than refurbishing and repairing them, has created a situation in which the new developments are faced with a looming completion deadline, devalued tax credits and high construction costs.

Additionally these new units will not be rebuilt on a one-for-one basis but will instead be part of a much smaller mixed-income development, decreasing access for those most in need of subsidized housing, who are often facing homelessness or who are indeed already homeless.

“After listening to the concerns of city and community leaders, developers and residents, I am more convinced than ever of the need for strategic, one-for-one replacement so that we can return all residents to New Orleans,” said Congresswoman Waters. “We must keep in mind the individuals and families most in need of, and that will benefit most from, these housing units – the majority of whom are still spread throughout the country four years later.”

“I believe we covered a substantial amount of ground during our hearings and tours in New Orleans. We all have a lot of work ahead of us but my priority continues to be making sure that quality public housing is available and affordable to New Orleanians as soon as possible. This city has suffered enough; let’s get its residents back home and continue our work setting the city on a sustained path to development.”

Panelists included individuals from the federal and city of New Orleans governments, housing authorities, and community and nonprofit organizations.

“Today’s hearing on the state of Louisiana’s Road Home Program was quite telling in how far we still need to go to ensure that all homeowners who suffered terrible personal property losses during Hurricane Katrina – coupled with the additional trauma of living through such a horrific storm – can access a stable, quality and fair source of funds to fix or rebuild their homes,” said Congresswoman Waters. “I brought my subcommittee here to New Orleans because although it has been four years since Hurricane Katrina, I wanted to reiterate to the people of this great city and to the American people that we will never forget what happened here and will never forget our collective responsibility to rebuild homes and businesses.”

To date the Louisiana Road Home Program has provided almost $8 billion dollars to approximately 125,000 homeowners. However the average award has been just over $60,000, far lower than the amount of money needed for residents of the city to engage in significant repair or rebuilding projects.

Compounding the immediate problem of low awards are disparities of many different kinds. According to the NAACP, African Americans on average have received approximately $8,000 less than white households for comparable reconstruction projects. Income, age and home title registration disparities, typically affecting minorities and the elderly, are also prevalent factors that impede access and assistance.

“The disparities that exist for individuals seeking assistance to rebuild or repair their homes are unacceptable,” said Congresswoman Waters. “It is high time to get serious and get beyond just talking about doing something to help these people: Four years after Hurricane Katrina we still have individuals living in trailers, seeking additional benefits, dispersed throughout the country in unfamiliar cities, and disconnected from their families, friends and their hometown.

“Based on what I have heard here today, it is my hope that moving forward the state of Louisiana, the city of New Orleans, the management corporations, the housing authorities and the relevant community organizations can work together to ensure that the award process is reformed so that awards are available, flow more quickly, and are reflective of both market value and what the residents of this city are up against as they seek to start their lives anew.”