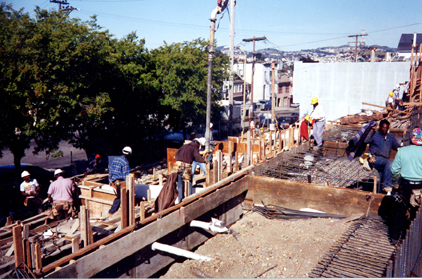 Fronts, a stalking horse, a cat’s paw: These are terms that describe the same predatory acts. An integral part of the gentrification of the Fillmore, Hayes Valley and the flatlands of Oakland were the acts described by the words used above. This is an act that frequents Bayview Hunters Point.

Lack of capacity and lack of wealth often result from our deceptive practices with each other. More often they result from the acts of malice perpetrated by powerful predators who profit from our community dysfunction. These predators come with names that are disarming. They are often religious church names. They are always controlled by the rapacious and the greedy.

These predators are often uncoupled from churches, but they create the illusion that they are church sponsored. They use some community-connected organization to gain entry. Once there they rape and pillage.

They do well for themselves and for their benefactors. They leave the pimped basking in the glow of illusions. They leave the community of the poor less well off and disillusioned. They own the land.

Those who are trapped in the duplicitous web woven by these pimps are seldom able to know that they are fronts. If they do know, they are not likely to admit that they are being duped. The predator knows the score. His mission was achieved through malice.

What he offers in return for what he gets is never of much value. It is often superficial and shallow. It is often not much more than a photo op or some bling bling. Sometimes it is a vehicle and a very small amount of cash. Remember how Americans bought Manhattan from the Indian leadership with some beads.

In simpler terms, good things happen because the communities of the poor assemble in large numbers and make demands. They come together and demand that the politicians do the right thing. They win the battle and lose the war. Their actions seldom result in benefits to their community. When the largess is passed out, their lives are seldom made better. More often than not the predators are the only real beneficiaries.

Minority contractors do not grow, our unemployed young people are not trained and people remain poor as crimes of need and frustration increase. The power of community that we do have is co-opted by ignorance, by need and by greed. Our community of the poor comes together and develops power for the common good. Those of us who have the capacity to fit the needs of the situation too often do not deliver for anyone but ourselves.

Fronts are often developed through malice, sometimes through ignorance and inexperience. Fronts are not illegal. They appear to be something that they are not. Establishing a relationship between the weak and the powerful forms them. The public intention is to provide mutual help. The relationship is formed because each believes it to be mutually beneficial.

As the urban community continues to be drained of its resources through fronts and through other means, we remain uneducated and untrained. We do not build capacity. We do not re-circulate our dollars. Our communities cede their power for change to those who resist change. Those who abandon our cities take the resources with them and retain their power over the shell they leave behind.

Oakland is perhaps first in its willingness to shelter fronts. San Francisco shelters them on a grand scale. I have become a part of an organization that is a front, in spite of the good work done at the grass roots. I plan to discuss a front and its malicious partner in my next article.