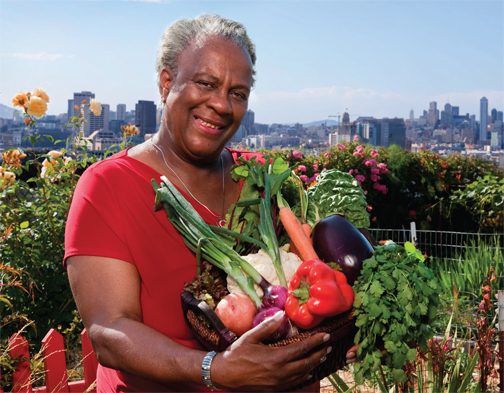 Anyone who has ever met long time Bayview resident Shirley Jones knows that she is a woman who embraces life. Her keen sense of humor combined with an infectious laugh is a delight to behold. Jones, the fourth of 10 children, moved to San Francisco with her parents from Yuma, Arizona, when she was just three years old.

Like many African American families who relocated here, her father came in search of a better life to work in the shipyard during World War II. Her family initially lived in the Fillmore and then in the Mission District, where she and some of her siblings were the first “colored” children to attend Marshall Elementary School.

Jones went on to attend Galileo High School but ended up finishing at John Adams after she became pregnant with her first child. Determined to continue her education, she held down many different types of jobs, including working as a babysitter, housekeeper, maid and short order cook. She remembers the days when she worked for a dollar an hour.

Jones subsequently married and had more children. Years later when she and her husband divorced, she found herself on public assistance. Those were the “Claudine” days of welfare when social workers could just “drop by” for unannounced home inspections to see what and more importantly who was living at the residence. From those humiliating and disrespectful experiences, a welfare rights activist was born. From there she broadened her sights to other issues that were affecting her community.

Jones went on to co-found and served as the executive director of the non-profit Californians for Health Education Employment and Dignity (CAHEED). After an illustrious career spanning 50 years, having raised her family and more than contributed to the good of her community, Shirley Jones now finds herself in a place that is unfortunately all too familiar to many Black women of her generation.

Her health has suffered from years of putting other needs before her own, from slowly adding on weight resulting in obesity, high blood pressure, diabetes and other health concerns. Ms. Jones like so many others sees her doctor regularly and knows what she should be doing but finds a big gap between the knowing and the doing. She knows that most of her health concerns would be vastly improved with just moderate lifestyles changes.

Enter SF LIVE!!-District 10, a partnership between the Bayview Hunters Point YMCA, Black Coalition on AIDS Health & Wellness Network, Bayview Hunters Point Health and Environmental Resource Center, Potrero Hill Health Center and the Health Promotion and Prevention Branch of the San Francisco Department of Public Health. The primary goal of the partnership is to improve the health and wellbeing of District 10 residents.

The partnership strives to increase physical activity and decrease stress levels of residents through organized community activities and the resources of the Southeast sector. The partnership, funded through the SFDPH, offers a wide array of activities, including dance classes, healthy food demonstrations, acupuncture, yoga, walking clubs, soul chi and grief management throughout the different neighborhoods of District 10.

The focus is on providing services that are convenient, easily accessible, relevant, FUN and free. Shirley Jones has become an official ambassador of the collaborative and she hopes to put the energy that propelled her to make such a difference in other people’s lives into making much needed changes in her own.

At a vibrant 70 years young, Jones has decided that she will no longer be complacent about her personal health issues and that “life ain’t over yet.” In fact she has decided that she has quite a lot of living to do. “I want to be healthier and be around to fully enjoy my eight grandchildren and two great-grands,” she says with conviction.

No one knows better than Jones how Black grandmothers tend to take care of everyone except themselves, but as ambassador to SF LIVE!!-District 10 one of her official duties is to put herself at the top of her “to do” list and she is loving it. So far she has had acupuncture at HERC’s satellite clinic located at 2 Cameron Way in Double Rock. Jones has enjoyed several sessions with Dr. Ramesh Kanaan. She is receiving acupuncture for relieving joint pain and for overall well-being. The services are free, close to her home and easy to access.

Over the next few months, we will travel with Jones as she utilizes the services in her community to have fun, increase activity and reduce stress. She is starting simply with the goal of losing a little weight, trying as many of the different services as she can and then continuing on with what she enjoys. She knows that people are more likely to stick with what they enjoy and what is easy to access.

Along the way she will encourage others in the community to get active. So if you happen to spot Shirley Jones at Soul Chi, taking water aerobics at King Pool, line dancing at Velma’s or just walking in the community, encourage her and shout out “Go Shirley Go!” SF LIVE!!- District 10.