The Iraqi who threw his shoe at George Bush delivered this speech on his release from prison in Baghdad Sept. 15. 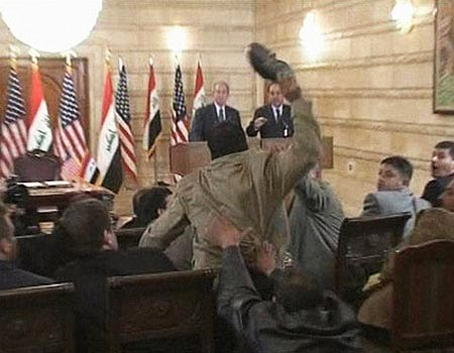 In the name of God, the most gracious and most merciful.

Here I am, free. But my country is still a prisoner of war.

Firstly, I give my thanks and my regards to everyone who stood beside me, whether inside my country, in the Islamic world, in the free world. There has been a lot of talk about the action and about the person who took it and about the hero and the heroic act and the symbol and the symbolic act.

But, simply, I answer: What compelled me to confront it is the injustice that befell my people, and how the occupation wanted to humiliate my homeland by putting it under its boot.

And how it wanted to crush the skulls of (the homeland’s) sons under its boots, whether sheikhs, women, children or men. And during the past few years, more than a million martyrs fell by the bullets of the occupation, and the country is now filled with more than 5 million orphans, a million widows and hundreds of thousands of maimed – and many millions of homeless because of displacement inside and outside the country.

We used to be a nation in which the Arab would share with the Turkman and the Kurd and the Assyrian and the Sabean and the Yazid his daily bread. And the Shiite would pray with the Sunni in one line. And the Muslim would celebrate with the Christian the birthday of Christ, may peace be upon him. And (all this) despite the fact that we shared hunger under sanctions for more than 10 years, for more than a decade.

Our patience and our solidarity did not make us forget the oppression, until we were invaded by the illusion of liberation that some had. (The occupation) divided one brother from another, one neighbor from another and the son from his uncle. It turned our homes into never-ending funeral tents. And our graveyards spread into parks and roadsides. It is a plague. It is the occupation that is killing us, that is violating the houses of worship and the sanctity of our homes and that is throwing thousands daily into makeshift prisons.

I am not a hero, and I admit that. But I have a point of view and I have a stance. It humiliated me to see my country humiliated. And to see my Baghdad burned and my people being killed. Thousands of tragic pictures remained in my head, and this weighs on me every day and pushes me toward the righteous path, the path of confrontation, the path of rejecting injustice, deceit and duplicity. It deprived me of a good night’s sleep.

Dozens, no, hundreds, of images of massacres that would turn the hair of a newborn white used to bring tears to my eyes and wound me. The scandal of Abu Ghraib. The massacre of Fallujah, Najaf, Haditha, Sadr City, Basra, Diyala, Mosul, Tal Afar and every inch of our wounded land. In the past years, I traveled through my burning land and saw with my own eyes the pain of the victims and heard with my own ears the screams of the bereaved and the orphans. And a feeling of shame haunted me like an ugly name because I was powerless.

And as soon as I finished my professional duties in reporting the daily tragedies of the Iraqis, and while I washed away the remains of the debris of the ruined Iraqi houses, or the traces of the blood of victims that stained my clothes, I would clench my teeth and make a pledge to our victims, a pledge of vengeance.

The opportunity came, and I took it.

Thousands of tragic pictures remained in my head, and this weighs on me every day and pushes me toward the righteous path, the path of confrontation, the path of rejecting injustice, deceit and duplicity.

I took it out of loyalty to every drop of innocent blood that has been shed through the occupation or because of it, every scream of a bereaved mother, every moan of an orphan, the sorrow of a rape victim, the teardrop of an orphan.

I say to those who reproach me: Do you know how many broken homes that shoe that I threw had entered because of the occupation? How many times it had trodden over the blood of innocent victims? And how many times it had entered homes in which free Iraqi women and their sanctity had been violated? Maybe that shoe was the appropriate response when all values were violated. 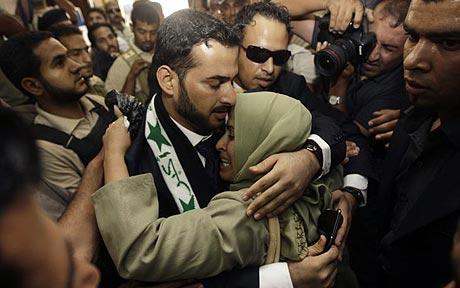 After six years of humiliation, of indignity, of killing and violations of sanctity and desecration of houses of worship, the killer comes, boasting, bragging about victory and democracy. He came to say goodbye to his victims and wanted flowers in response.

Put simply, that was my flower to the occupier and to all who are in league with him, whether by spreading lies or taking action, before the occupation or after.

I wanted to defend the honor of my profession and suppressed patriotism on the day the country was violated and its high honor lost. Some say: Why didn’t he ask Bush an embarrassing question at the press conference, to shame him? And now I will answer you, journalists. How can I ask Bush when we were ordered to ask no questions before the press conference began, but only to cover the event. It was prohibited for any person to question Bush.

I take this opportunity: If I have wronged journalism without intention, because of the professional embarrassment I caused the establishment, I wish to apologize to you for any embarrassment I may have caused those establishments. All that I meant to do was express with a living conscience the feelings of a citizen who sees his homeland desecrated every day.

History mentions many stories where professionalism was also compromised at the hands of American policymakers, whether in the assassination attempt against Fidel Castro by booby-trapping a TV camera that CIA agents posing as journalists from Cuban TV were carrying, or what they did in the Iraqi war by deceiving the general public about what was happening. And there are many other examples that I won’t get into here.

But what I would like to call your attention to is that these suspicious agencies – the American intelligence and its other agencies and those that follow them – will not spare any effort to track me down (because I am) a rebel opposed to their occupation. They will try to kill me or neutralize me, and I call the attention of those who are close to me to the traps that these agencies will set up to capture or kill me in various ways, physically, socially or professionally.

And at the time that the Iraqi prime minister came out on satellite channels to say that he didn’t sleep until he had checked in on my safety and that I had found a bed and a blanket, even as he spoke I was being tortured with the most horrific methods: electric shocks, getting hit with cables, getting hit with metal rods, and all this in the backyard of the place where the press conference was held. And the conference was still going on and I could hear the voices of the people in it. And maybe they, too, could hear my screams and moans.

In the morning, I was left in the cold of winter, tied up after they soaked me in water at dawn. And I apologize for Mr. Maliki for keeping the truth from the people. I will speak later, giving names of the people who were involved in torturing me, and some of them were high-ranking officials in the government and in the army.

I didn’t do this so my name would enter history or for material gains. All I wanted was to defend my country, and that is a legitimate cause confirmed by international laws and divine rights. I wanted to defend a country, an ancient civilization that has been desecrated, and I am sure that history – especially in America – will state how the American occupation was able to subjugate Iraq and Iraqis until its submission.

They will boast about the deceit and the means they used in order to gain their objective. It is not strange, not much different from what happened to the Native Americans at the hands of colonialists. Here I say to them (the occupiers) and to all who follow their steps and all those who support them and spoke up for their cause: Never.

Because we are a people who would rather die than face humiliation.

My efforts will be toward providing care for widows and orphans and all those whose lives were damaged by the occupation. I pray for mercy upon the souls of the martyrs who fell in wounded Iraq and for shame upon those who occupied Iraq and everyone who assisted them in their abominable acts. And I pray for peace upon those who are in their graves and those who are oppressed with the chains of imprisonment. And peace be upon you who are patient and looking to God for release.

And to my beloved country, I say: If the night of injustice is prolonged, it will not stop the rising of a sun and it will be the sun of freedom.

One last word: I say to the government, It is a trust that I carry from my fellow detainees. They said, “Mutadhar, if you get out, tell of our plight to the omnipotent powers” – I know that only God is omnipotent and I pray to Him. “Remind them that there are dozens, hundreds of victims rotting in prisons because of an informant’s word.”

They have been there for years. They have not been charged or tried.

They’ve only been snatched up from the streets and put into these prisons. And now, in front of you and in the presence of God, I hope they can hear me or see me. I have now made good on my promise of reminding the government and the officials and the politicians to look into what’s happening inside the prisons. The injustice that’s caused by the delay in the judicial system.

Thank you. And may God’s peace be upon you

The translation is by McClatchy special correspondent Sahar Issa.