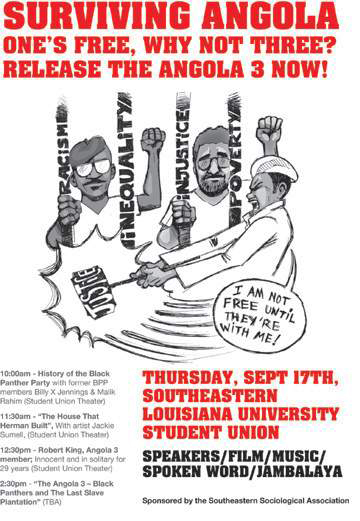 We are not surprised that Malik Rahim is being hailed as one of the heroes of Hurricane Katrina. In 1997, Malik rediscovered information on our case and made it his mission to bring attention to the plight that Albert, King, myself and so many other Louisiana prisoners have endured in being unfairly convicted and sentenced. The Angola 3 went from obscurity to international recognition thanks to Malik’s efforts.

Malik has brought the same energy and vision to his groundbreaking work with Common Ground Collective. His vision has expanded to meet the magnitude of response required to deal with the crisis at hand. A lifetime of service beginning with the Black Panther Party and continuing with programs for ex-offenders and housing advocacy are the strong background that Malik draws on in his current efforts. Joined by a remarkable array of young, skilled professionals and activists, together they are creating a model for cooperative community needs-based service programs and collective action.

The Angola 3 are proud to be affiliated with Malik and Common Ground and join in their call for legal assistance in assessing the cases of numerous individuals arrested and imprisoned after the hurricane, many of whom have not yet been charged and sit in limbo while the state continues to keep its court system closed post-Katrina! Angola, a 5,000-capacity facility, has had an increase of 3,000 prisoners, mostly men, but some women as well. This has caused severe overcrowding. Many prisoners are living in tents and all are being double bunked – even CCR (“Closed Cell Restricted” or “extended lockdown”) is not exempt.

At the same time, Gov. Blanco is calling for a special session of the legislature to address the prison situation in Louisiana, which incarcerates more individuals per capita than any other state in the union. Faced with a $4 billion deficit, Blanco is looking to the prison industrial complex as a place to start cutting dollars.

Blanco is reportedly reviewing the elimination of the life sentence laws and wants to change life sentences to fixed sentences so that prisoners have a chance at parole. She is soliciting proposals from groups doing prison work in Louisiana.

The Angola 3 would like to see Common Ground Relief submit a proposal to this forum. We have long believed that the life-without-parole sentences presently being served by thousands of Louisiana prisoners are inhumane, not to mention financially senseless. The Louisiana Legislature should enact changes in the law that would allow lifers to rehabilitate themselves and earn release from prison. This would be a humane and realistic approach to sentencing reform in Louisiana.

Additionally, the current fiscal and structural crises in Louisiana appear to provide an appropriate time to raise the issue of eliminating the death penalty and substituting fixed sentences as an alternative cost-saving strategy. We look forward to working with Common Ground in their continued efforts to provide services and strategies in the rebuilding of New Orleans and the Gulf Coast.

As Malik has stated, it is time to supplant the slave syndicate that has prevailed for so long in this state. Malik also talks about the spirit of Emmett Till saving New Orleans from total destruction. We believe it is the spirit of Loubertha Johnson, Malik’s mother who passed from this life in September of 2004 that is blessing the efforts of Common Ground Relief!

Power to the People!

Thirty-seven years ago, deep in rural Louisiana, three young Black men were silenced for organizing a Black Panther chapter and trying to expose continued segregation, systematic corruption and horrific abuse in the biggest prison in the U.S., an 18,000-acre former slave plantation called Angola. Robert King was freed in 2001, but Herman Wallace and Albert Woodfox remain behind bars – in solitary confinement for nearly 37 years. Send our brothers some love and light: Herman Wallace, 76759, Elayn Hunt Correctional Center, Unit 5, D-Tier, P.O. Box 174, St. Gabriel, LA 70776, and Albert Woodfox, 72148, CCR, Lower A5, 13, Louisiana State Penitentiary, Angola, LA 70712. This commentary was written in late 2005 but was not widely published; it is reissued now to mark the fourth anniversary of Katrina. To learn more about Common Ground Collective, visit www.commongroundrelief.org. To learn more about the Angola 3, visit the new Angola 3 news site, http://angola3news.blogspot.com/ as well as www.angola3.org.