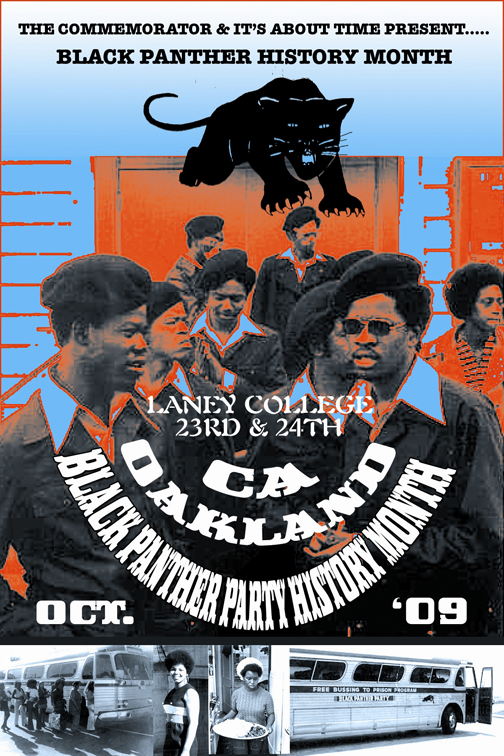 This October marks the 43rd anniversary of the founding of the Black Panther Party. To celebrate this milestone, the It’s About Time Committee and The Commemorator are presenting a two-day Book Fair and Teach-In at the Laney College Student Center, 900 Fallon St., on Friday, Oct. 23, 12-3 p.m., and Saturday, Oct. 24, 11 a.m. until 4 p.m., as just one of many scheduled October events.

On Saturday, we will be celebrating the birthday of Bobby Seale, co-founder and chairman of the Black Panther Party. There will also be a presentation by Elbert “Big Man” Howard, an original founding member and international spokesperson for the BPP, who will introduce his idea for an historical site which would serve the Oakland community and attract visitors and revenue to Oakland.

Historically, the Black Panther Party contributed to the Oakland community by starting the first Free Breakfast for School Children program and free Medical Clinics which served the people and led to testing and research for sickle cell disease. These programs in Oakland evolved into nationwide programs and set models for ones which exist today.

Our school, the Oakland Community School, served as a model for the charter schools of today. 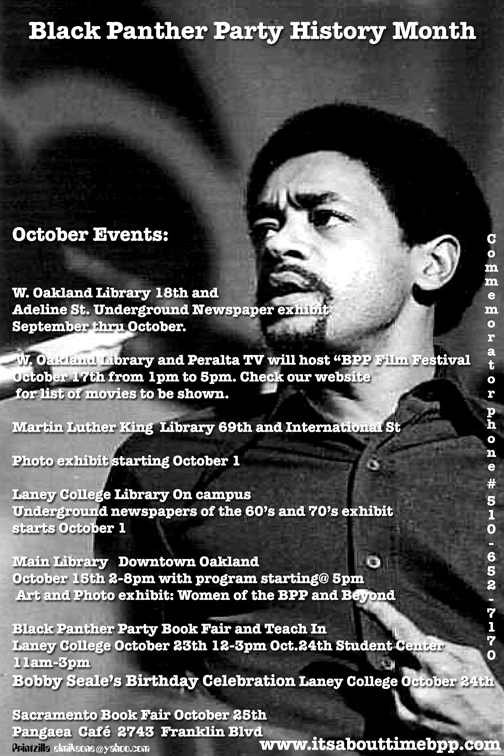 It is a known historical fact that before the Black Panther Party, candidates of color did not get elected here in the city of Oakland. This practice was changed forever after the Black Panther Party led a voters’ registration drive that engendered votes and support for Black candidates. The election of candidates to public office who are Black, Asian, Native American and Hispanic, past and present, such as Lionel Wilson, Ron Dellums, Barbara Lee, Willie Brown and many others, owe their successes in part to what the Black Panther Party initiated so many years ago.

The Black Panther Party led the way and laid the groundwork nationwide that made it possible for the disenfranchised and the oppressed to vote and elect candidates who would reflect the needs of the community and, thus, better serve them.

Every October in Oakland and many other cities, there are educational events held to commemorate the unique and important contributions that the Black Panther Party made to our collective history.

Please join us in celebrating Oakland’s rich and life-changing history on Oct. 24. We look forward to seeing you there. For more information and updates, visit our websites: www.itsabouttimebpp.com and www.bigmanbpp.com.

Demonstrating that the legacy of the Black Panther Party remains relevant and very much alive, don’t miss the short film “Operation Small Axe,” directed by Adimu Madyun, a documentary centered on Prisoners of Conscience Committee Minister of Information JR and the internationally renowned Block Report Radio show. It will be screened at two of the month’s events: first during the Black Panther Film Festival, Saturday, Oct. 17, 1:35 p.m., at the  West Oakland Library, 18th and Adeline in West Oakland and also during the celebration at Laney College, on Saturday, Oct. 24.