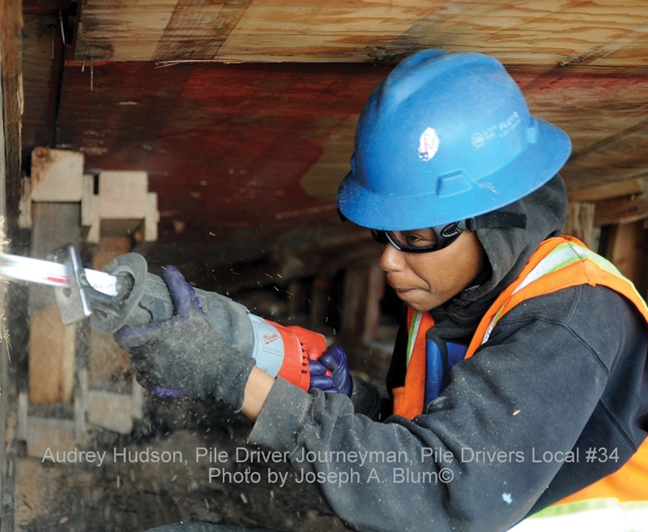 Audrey Hudson stands out among the honorees as the only literal bridge builder, and the Bay View wanted you to meet this outstanding woman who’s blazing the trail for other women to follow her into the male-dominated field of construction work. A journeyman with Pile Drivers Local 34, Audrey first joined the union in 1999. She was elected to the Tradeswomen Policy Council in 2006 and served as pile driver steward for the San Francisco Oakland Bay Bridge Self Anchored Suspension Project. She’s won many honors, including a congressional commendation.

Audrey was one of the women who inspired Flyaway Productions’ “The Ballad of Polly Anne,” an aerial dance program choreographed by Jo Kreiter. She will also be featured in the upcoming documentary film by Maria Brooks, “A Hammer in Her Hands.” Here’s Audrey in her own words.

Lisa: How did you get your start in construction?

Audrey: I was living in Los Angeles. In the summer of 1998, after seven years of being a stay-at-home mom and running a small daycare at home, my personal relationship ended. The reality of single parenthood began to sink in. While out looking for a traditional job, with no vehicle, I met a young woman at the bus stop wearing dirty work clothes. I struck up a conversation with her and she told me about the Carpenters Education and Training Institute, a 10-week pre-apprenticeship program that taught basic carpentry skills and provided an introduction to union trades.

The program finished in September. Armed with 10 weeks of hands-on carpentry, knowledge of power tools and physical training, and with the help of one of the instructors at the school, I got myself a job with a non-union residential framing company. I also decided to take the test to be indentured into the Pile Drivers Local 2375 and received the letter to take the test at the union hall in October. I will never forget turning in the test and the woman at the desk saying,” Congratulations! You did well on the test. Welcome to Wilmington Pile Drivers.”

I replied, “Whatever that is, thank you so much!” I raced home to tell my two boys I was in the Pile Drivers Union. They asked, “What’s that, mom?” I shrugged my shoulders and said, “I don’t know.”

In February of 1999, after four months building houses, I was indentured into Wilmington Pile Drivers Local 2375. I began work in the Port of Long Beach at Berth 71 as a first period apprentice. After about two weeks on the job I was requested to meet with the executive board of the union hall. I told them that I had done work for Habitat for Humanity and for a California Redevelopment Project during my pre-apprenticeship program. I even revealed my four months of non-union work. They informed me that based on my very recent but past experience I was promoted to second period apprentice.

I was liking the union already. With hopes of working on the bridge, I moved to the Bay and was indentured into Pile Drivers Local 34 in August 2003.

Lisa: What projects have you been involved in?

Audrey: I have worked on the Alameda Corridor in Los Angeles, Pasadena Metro Gold Line, Port of Long Beach, Port of San Francisco, Port of Oakland, SFO, Third Street Light Rail and the San Francisco-Oakland Bay Bridge Project. These are the big jobs. I have worked a lot of little jobs where it’s just the crew, a lot of mud and the sound of the hammer.

Lisa: What kind of work did you do on the Bay Bridge?

Audrey: My job on the Bay Bridge project is definitely the most awesome to date. I spent two years out there with an awesome crew. My foreman Nigel gave me the utmost respect and he never felt that I was incapable of doing the work. The work is rough. Pile drivers do all phases of construction. I did carpentry and form work, rigging, used numerous pneumatic and power tools, placed steel and concrete, cut and burned steel, operated a man lift and forklift when necessary, also I rented the forklift from Sun Equipment, installed thermal control systems to regulate the curing of placed concrete and was appointed pile driver steward from my union.

Lisa: What’s it like to work mostly with men?

Audrey: Working with men can be a challenge. Entering the trade at 36, I was pretty grounded in who I was as a person. I was not intimidated by the attitudes or opinions of the men. However, I was very aware of their knowledge and expertise and how much I had to learn. The environment can be hostile at times because big change comes slowly. I have never had a problem with that because as a woman I realize that men are only here to keep us company anyway.

The guys just want you to do the work. It does not matter what your gender is; you have to get on the team. Our work is harsh and dangerous. We have to take care of each other out there. My union hall is fully loaded with some of the best bridge builders and welders in the world. It is an international union and we set the standard. I am proud to be a part of that. No one can ever take away what my union has given to me – on so many levels, inside and out.

Lisa: Tell us about some of your memorable experiences as a pile driver.

Audrey: My very first job was a great beginning because it was a water job. We were retrofitting Berth 71 in the Port of Long Beach. I really got to see a lot of the type of work that pile drivers do. I will never forget when I walked onto the job with my superintendent and he told me I would be working with a guy who was cutting steel bars with the chop saw. This creates an enormous amount of sparks. My hair was pretty long at the time and all I could think about was my hair catching on fire. I was nervous. Needless to say I have since learned to handle much hotter and bigger fire.

My most memorable job would have to be in the Port of Oakland for Manson Construction. I was hired to work on a barge crew driving jet pile out on the bay. All the rigging and tools are heavy and the work is brutal. Focused teamwork is the only option. Most pile drivers will tell you there is no work like water work. I have been fortunate enough to have spent more time on the water than inland.

Lisa: In 2002 you were honored at the First Annual Tribute to Working Class Women, Harry Bridges Institute and Port of Los Angeles, and simultaneously awarded a Certificate of Congressional commendation in recognition of Working Class Women. Do you think things have changed for women in labor since then? How?

Audrey: I have seen more women enter the trades since I did in 1998, but we still have the issue of retention. Due to local and state legislation, more programs are available and there is greater awareness, but it is not enough. In 1978 Jimmy Carter set a goal of 6.9 percent women in the construction industry. We have yet to reach that mark.

Although women make up 46 percent of our country’s work force, they only represent 2.5 percent of the construction industry. The strident work environment makes it difficult for women to persevere. The process of change is slow, but our numbers will continue to grow as long as we force awareness.

The Labor Department should consider a relationship with the Department of Education that would promote awareness during the school age years. A lot of girls don’t even know about the trades as an option when planning their future. Large construction companies make more than enough money to fund awareness programs that should target young women. The change in attitude starts with them. Big construction does not realize the deficit of blocking out women. We are smart. The capacity for knowledge was not given to one sex or the other.

Lisa: How do your sons see your work? Do they think it’s dangerous, difficult, exciting?

Audrey: My two sons are the driving force of this big adventure. They have pulled off my boots and brought me hot tea when my body ached. They have hugged me and patted my shoulder and told me everything would be OK on lay-off day and cheered me on every time I have started a new job. They are proud and have no problem telling their teachers and peers what a woman is capable of. They are not amazed at what I do because I have shared everything with them from the beginning. I have shown them many job sites. It is exciting for them to tell people what I do and they like to brag. They understand that the Pile Drivers has given us a good life and they are happy. They are sound and competent and not afraid of challenge.

All I wanted to do was pay the sitter and be home with my boys in the evening. I vowed to God that if he showed me that job, I would do it with vim and vigor. I found the Pile Drivers and never looked back. My eldest graduated from high school in June with honors and my youngest entered high school this year. It has definitely allowed me to accomplish my goal of giving my children positive childhood years.

Lisa: Do you have any advice for other women entering the field?

Audrey: For any woman who has taken that step into the male dominated world of construction, I say to you, “Dig deep and endure. Your perseverance will enlighten you to the sacred knowledge of our forefathers as you join them as a builder of our modern world. This knowledge will give you strength and dignity. You also earn a decent wage while learning all those skills!”

Flyaway Productions is a nationally recognized apparatus-based dance company that explores the range and power of female physicality. Artistic Director Jo Kreiter, choreographer, creates dances on steel objects, typically off the ground, with dancers suspended anywhere from 2 to 100 feet above the ground. About her connection with Audrey Hudson, Jo says, “We both face physical risk and have to negotiate fear in our jobs. We both work with steel that is much heavier than we are.” Learn more at flyawayproductions.com. Lisa Okuhn can be reached at neqacomm@quinn-assoc.com. 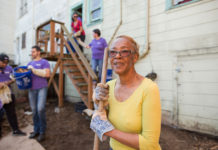