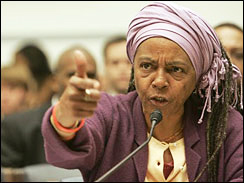 Washington, D.C. – The Gulf Coast Civic Works Campaign welcomes President Barack Obama’s decision to create a federal working group to examine our nation’s long-term recovery policies in the aftermath of Hurricanes Katrina and Rita and to extend the mandate of the Office of the Federal Coordinator for Gulf Coast Recovery.

This announcement comes after 60 survivors of Hurricanes Katrina and Rita, joined by national human rights and faith-based advocates, spent two days last week in Washington, D.C., urging the administration and congressional officials to take a new approach to disaster recovery. The group met with senior officials at the Army Corps of Engineers, Department of Homeland Security, Department of Housing and Urban Development, Environmental Protection Agency and the Federal Emergency Management Agency as well as members of Congress and staff in over 40 congressional offices. During these visits the partners of the Gulf Coast Civic Works Campaign urged the administration to form an inter-agency working group bringing together federal officials and local community leaders to develop solutions for tackling remaining recovery challenges.

“As someone who works in Louisiana’s rural communities rebounding from Hurricanes Katrina, Rita, Gustav and Ike, threatened by poverty, climate change and coastal land loss, I welcome this administration’s renewed focus on Gulf Coast recovery,” said Sharon Gauthe, executive director of Bayou Interfaith Shared Community Organizing (BISCO). “As this new team begins its work, I would encourage the administration to look to the Gulf Coast Civic Works Act (HR 2269) as a way to incorporate the lessons learned from the 2005 and 2008 hurricanes and to fulfill the federal government’s promise to create stronger, safer and more equitable communities.”

“In the aftermath of Hurricane Katrina, non-profits and community organizers stepped up to fill the gaps left by the federal government to meet the needs of the most vulnerable people and places, both in the immediate response and now in the recovery phase,” said Councilmember Bill Stallworth of the Biloxi City Council and executive director of HOPE CDA. “As the Obama administration composes its new plan in the Gulf Coast and for future disasters, we believe policy like HR 2269 could help to leverage the passion, innovation and knowledge of community and faith-based organizations to help restore not just neighborhoods but lives.”

Monika Kalra Varma, director of the Robert F. Kennedy Center for Human Rights, said “The RFK Center along with the partners of the Gulf Coast Civic Works Campaign welcome the administration’s commitment to improving our national recovery efforts. Strong policies are needed to ensure the fundamental human rights of displaced and low-income survivors to participate in recovery, to return home with dignity and safety, and to find decent work opportunities. Meeting these challenges for the survivors of Hurricanes Katrina and Rita will set an important precedent for how we deal with future disasters.”

The Gulf Coast Civic Works Campaign helped develop HR 2269 based on meetings with leaders and community members across the region. The resulting bipartisan legislation builds upon the success of community and faith-based organizations to tackle recovery challenges while fighting poverty, restoring the environment and promoting resiliency.

The campaign has grown to a coalition of 250 local and national organizations advocating for a renewed partnership between Gulf Coast communities and the federal government. The campaign continues to advocate for policies based on HR 2269, the Gulf Coast Civic Works Act, as a pilot project for human rights-based disaster recovery to create jobs, rebuild and sustain vulnerable neighborhoods.