PNN reports and supports on October 22nd, the day to end police brutality 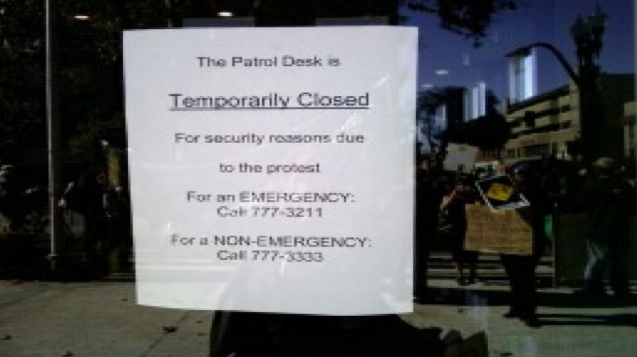 “I am unarmed! Please don’t shoot!”

Eight shots by a police officer was the response, according to a speaker. “This is our holocaust!”

All of them struck down by dark blue uniformed figures who are sworn to “protect and serve.” A T-shirt is worn by numerous victims at this event, showing a stick-figured police officer gunning down a man.

“DANGER, POLICE IN THE AREA!” it reads.

“NO MORE STOLEN LIVES!” everyone yelled.

“My only child was gunned down in 2001 while he was having a psychological breakdown: 48 shots!” mesha Monge Irizarry exclaimed to the crowd. Since then, the death of her son, Idriss Stelley, is what drives her daily to do the work that she tirelessly continues to do, supporting police brutality victims and families of victims and helping them seek justice.

October 22nd, National Day of Protest to Stop Police Brutality, Repression and the Criminalization of a Generation, is much more than just a traditional, methodical way for everyone deeply impacted, including myself, to combat police terrorism. Physical and verbal visibility had to be everyone’s direct approach towards a universal, monumental change that is long overdue, preventing us from winning justice.

Now we are demanding no more injustice to be served to us by a just-us system. No batons swung at us. No tear gas or water hoses sprayed on us. No dogs turned on us. No guns fired at us. Just like the ‘60s era, our struggle continues in the 21st century. Our once-silenced voices and visible stances are the exchange of fire that guns us down each day.

I awaited my POOR Magazine family outside our office at 10:30 a.m. Nearly a half hour later, my mentor, POOR co-founder “Tiny” Lisa Gray Garcia arrived. Afterwards, my other comrades, Kim Swan aka Queennandi, Ruyata McClothin aka RAM and Carina Lomeli appeared.

We headed to the rally, which was at the Oakland City Hall Plaza, where we were joined by POOR comrade Muteado and other comrades in our struggle against this endless oppression, which is the government’s control arm.

Our march destination would be the entrance of the very building that has had a wicked history of patrolling and controlling communities of color: THE OAKLAND POLICE DEPARTMENT, where men and women of all races and faces are trained and militarized by government, instructed to kill and indoctrinated in police culture.

It is police culture to serve and protect the interests only of the government that pays their bills and fills their dinner plates and to oppress, depress and repress, not really to serve those in distress – that always being the case in poor communities of color and poor communities in general, but even in some cases the privileged.

“I think this rally is good because it brings together different units in the resistance movement,” Minister of Information JR, associate editor for the San Francisco Bay View National Black Newspaper and voice of Block Report Radio, explained to me. “Together against the police, the government, murder and terrorism. Together to come up with creative solutions.”

We were all centered together in the middle of the plaza, a hot sun beaming down us. We ignored the smug and stern faces of the very few Oakland police officers who surrounded and observed us as they prepared to walk alongside of us for “crowd control and traffic safety” – although we only marched on the sidewalk and our march would only be an estimated six blocks.

From the director of the Idriss Stelley Action Resource Center, mesha Monge Irizarry, Rita Akayama of the October 22nd Coalition, Christine Lynn Harris, anti-organized stalking/covert terrorism activist, my family of POOR Magazine and POOR News Network, and numerous other groups and families of police brutality victims, the true heat wave felt in the air was everyone’s anger aimed at the unrelenting injustice by police and the “justice system.”

The change of venue motion recently granted by a judge in the case of Oscar Grant’s killer, Johannes Mehserle, that could lead to his murder trial being held before an ignorant, uncaring jury in a as yet unknown California county greatly increased our anger toward the system and its corruption.

“My life was stolen! I am Oscar Grant!” yelled a female speaker on the mic.

“This is a chance for everyone who has lost a loved one through police brutality to tell people,” Kathleen Espinosa, mother of Asa Sullivan, said to me. She gave an emotional address about what the aftermath has been like for her and her family since Asa was killed by two members of the San Francisco Police Department as he hid in a two-and-a-half-foot-high attic crawl space in 2006. 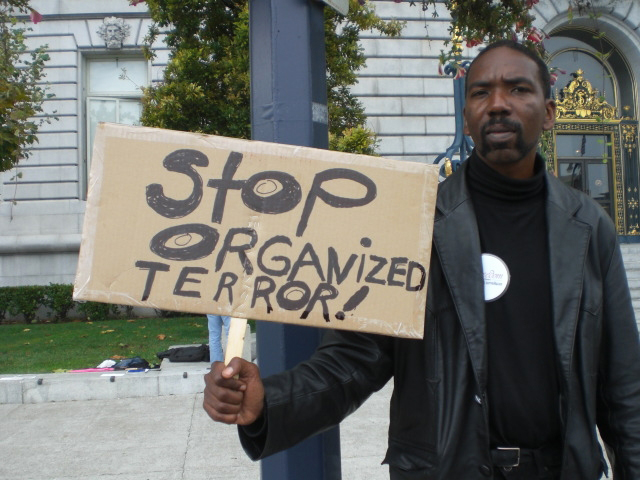 “I could’ve been Asa,” I stated in a Beyond Chron article a short time after his death. This was ever so true, when I sat peacefully in my single room occupancy hotel room at the Allstar on a cold dark evening Oct. 7, 2005. I was preparing to go to the supermarket for groceries.

The memory of 12 cops illegally opening up my door, drawing their firearms and snatching me out of the sanctity of my home in a “mistaken identity scenario” forever stays with me. It has been one of the main cores of what I do in my work for POOR.

In her report for POOR on the rally, Queennandi wrote: “Fellow comrade and ‘man on the cross’ Brother JR spoke with fire:

“’Wherever the trial goes, we will go! We will organize and educate the people (in the area that the trial will be taking place) and enlighten them on the seriousness of police brutality and murder!’

“Brother JR himself has been nailed to the cross for his souljah role in seeking justice for Oscar Grant. JR’s next court date is set for Friday, Oct. 30, 9 a.m., in Courtroom 11 at 1225 Fallon, Oakland. His unbroken spirit opened eyes and restored faith in the fact that the only way to justice is in the hands of Just Us.

“I held back tears as I spoke on the assault I endured when I was seven months pregnant by SFPD’s ‘finest,’ Officers Miller (retired) and Shea. I was slammed viciously on my huge belly, and when witnesses began to gather around to protest, I was punished even more. One officer actually had the ‘beastly’ nerve to put his knee on my back, using all of his weight, and I thought for sure that my unborn cub wouldn’t survive.

“Police brutality has become a generational experience in my family. My mother and younger brother did not survive this hateful wicked Sssystem, and it is up to me and the rest of us to take a stand to demand of this murderous Sssystem that there will be NO MORE STOLEN LIVES!”

At the October 22nd rally, my ears captured numerous emotional, tearful and angry testimonies from people victimized by what everyone has called “an epidemic” of police terrorism. Before we marched, my family of POOR began to perform – Po’ Poets style – a piece dedicated to the memory of Oscar Grant:

Po’ Poets: Educating and skating on police hatred in the Bay.

Po’ Poets: Is this the land that the Lord hath made? Shot dead was my unarmed neighbor just the other day. Now Oscar Grant lies beside him in a King’s marked grave.

Queennandi: I am tired of being a slave.

Po’ Poets: The night riders are back. And this time, they are not wearing white. They are dressed in blue. With handguns and a badge.

Muteado: Another brotha gets lynched!

“This is totally unacceptable that every year we all have to protest this ongoing problem in our society,” I said to the crowd. I concurred with Muteado’s poem by stating the history of the police as the original “slave catchers.”

I also brought to everyone’s attention the seemingly invisible terror which is an instrument of “law enforcement” with the means of organized stalking via covert terrorism that uses electromagnetic weapons and destructive technologies against unsuspecting citizens. I referenced my statements to Christine Lynn Harris, who has been highly active around the unreported issue in corporate mainstream media, as she held up a sign that said, “Stop electromagnetic weapons!”

Our march began after a few more testimonies from police victims and survivors. Glancing at the onlookers, we chanted: “No more stolen lives!” “Justice for Oscar Grant!” “Join us!” “Stop police brutality!”

Approximately 20 minutes and six blocks later, we arrived to the entrance of the Oakland Police Department. Standing together with my POOR family at the front entrance with the hot sun beaming steadfastly, my mentor Tiny pointed out a startling sign that was on department’s front entrance: “The Patrol Desk is Temporarily Closed For security reasons due to the protest.”

It was blatantly clear to us that the police refused to hear our voices.

I recalled the words of Ida B. Wells: “Our country’s national crime is lynching. It is not the creature of an hour, the sudden outburst of uncontrolled fury, or the unspeakable brutality of an insane mob.”

Marlon Crump, writer for POOR Magazine and POOR News Network and other outlets, can be reached at marliniumn@yahoo.com. His work can be read at poormagazine.org.

Stop Police Brutality, Repression and the Criminalization of a Generation