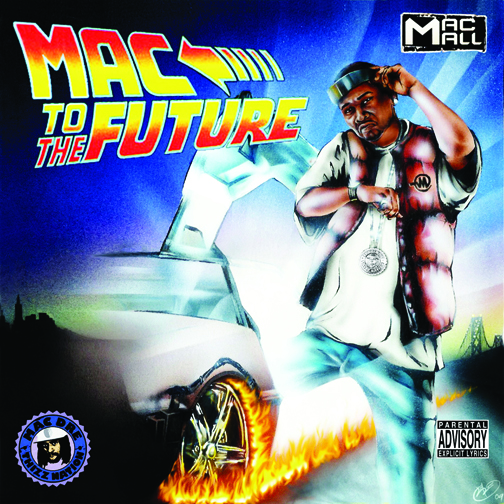 There are a lot of artists in the Bay that I like for different reasons, but I have to say Mac Mall is one of my favorite all around artists. He was 16 years old when “Illegal Business” was released, his debut on Young Black Brotha Records out of Vallejo, who also brought the Mack, Mac Dre, Ray Luv and Young Lay to the world. Actually, this is the record company that put Vallejo on the Bay Area hip hop map. The lyricism and swagger of the young teenage Mac Mall on songs like “Illegal Business,” “Sic Wid Tis,” “Ghetto Theme” and “My Opinion” made him a legendary rapper out the gate.

Apart from this being my fam-bam, Mac Mall has to be one of the most all around articulate and intelligent artists in the Bay, as you will see if you haven’t already through this interview. Check out and listen to his new album, “Mac to the Future,” then read the man in his own words …

Mac Mall: I’m loving being in the building wit’ you. This my first interview for this new record, “Mac to the Future,” and I am so happy to be doing it wit’ you. Straight up.

M.O.I. JR: I appreciate it, bruh. I know that you made your first record when you was 16 years old. Without saying too much about your age, you done been in the game about a decade and a half, right.

Mac Mall: The cold part about it, it’s like the birthday before this, I thought of this. I been Mac Mall longer than I been Jamal, you feel? I grew up in this game. I actually wrote my record – I would say my first record was a work of my whole life – then I put it out when I was 16. But the record was wrote when I was 13, 14, 15, you know what I mean? Being at the age that I am now, you feel, I feel privileged just to see the progression of the game and everybody come feel the pain when we lose some, because we lost a lot in this game.

M.O.I. JR: With you still being a young Black man, yet you still like a grandfather in rap, it’s been generations. It’s been rappers that came and went that was years after you, that already came, had their highlights and went. And I’m saying that you are up there with the grandfathers, Mac Dre, The Mack …

Mac Mall: Man, the Mack … I’m kids of them, though, you feel? When I came out, if you remember, that’s when Dre went to jail. The Mack had got killed, Dre went to jail, and it was on me to represent Crestside music, Cutthroat Music, what we do. If I didn’t come out at that time, we would have been silent, and we had to do our thang. And I was blessed to hook up wit’ Khayree, you feel? And me and him put together what some call a classic, “Illegal Business.

M.O.I. JR: No doubt it was a classic. And that was on Young Black Brotha (Records), right?

It was real good around there; it changed the life of me and my potnas. We got to travel. You know I had been blessed to see the world when I was young, but with that I had to go around and represent my neighborhood to everywhere. I had to do my thang and wave the flag. And we was blessed for it to be successful and for what some say is a classic. Me, I don’t even say it because I let for the people who listen to it and were affected by it, I let them say it.

M.O.I. JR: That’s what it was. I hadn’t seen you in a while, but what I wanted to tell you that I was in New York and I was out there kickin’ it wit’ some of my potnas, and we in Brooklyn talking about Bay Area rap. And they was talkin’ about Dru and Short and all of that, but when we get to lyricists, the only person that they named from out here was Mac Mall. And I was like “hell nah”; I’m about to call bruh.

So what I wanted to ask you was who inspired you lyrically, because I can say you came out at a time when rap was real gimmicky. I’m from Oakland, but Too Short was coming wit’ some one-liners. It wasn’t nothing that was real spittin’ on a rap level where you could compete wit’ Kool G. Rap. But when you came out, there was a level where dude ain’t just talkin’; dude is rappin’.

Mac Mall: Well, first, I got to give love to my mama for making me graduate from high school, you know what I mean? And for teaching me how to read. My mother had me reading when I was real young. I was reading books at 4 years old, so I always had a love of reading. 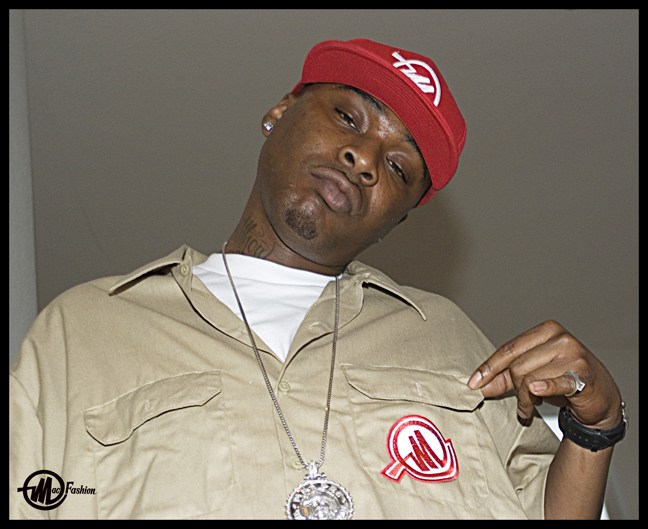 My thing is that in my mind, I want to know. So through reading books – and I know this sounds square, whatever, I don’t care – but this is the real thang: From having a thirst for knowledge, I always read. And a person being smart and talkin’ smart, that always was fly to me. I always wanted to create, and I always wanted to use words because I used to stutter when I was young, you feel? And the only time when I didn’t stutter was when I cussed and when I rapped.

So I wanted to use my words to impress people. I wanted to be smarter than the average cat, and I wanted to be deeper. And I grew up wit’ those old school MCs like Kool G. Rap and like Big Daddy Kane, like Ice T and like Scarface, and like Mac Dre and like the Mack, you know what I mean? I want to tell everybody that you can’t listen to a Mac Mall or a Mac Dre record if you don’t know nothing about the Mack.

And if you know anything about the Mack, you know that at that time, he was about the game, but he was also about the struggle, you know what I mean? So like we all was laced wit’ that. A Mack, man, is somebody wit’ a brain; he’s not just a one-trick pony. A Mack is going to know how to do many things; anything that comes in front of him, he gonna handle it. And every Black man has a little Mack in him. I just so happen to have a whole lot. But reading, cuzin, that’s what got me wit’ them lyrics, just to bring it back to that.

M.O.I. JR: I’m glad that you even brought it to that because somebody else who read a lot and who pushed a lot of that same position was a friend of yours – was the late great Tupac Shakur. I don’t know, but it seems like before you even met Pac, when you was making your album, you already had game, to be such a youngsta. He was on that same type of page. How did y’all hook up? What put y’all together? How did y’all meet?

Mac Mall: I never really told the whole story nowhere. And since this is my first interview, we gonna keep it exclusive. Cuddie, I had did my record. Now God works in mysterious ways. Leila and Ray Luv, you already know their story. They were already working with young Black Brotha Records at the time, you feel? I walked up to Leila as a youngsta, after I did my first show wit’ Ray Luv, and asked her to be my manager. “You goin’ to be my manager.” She’s like “Man, what?” I’m like, “You goin’ be my manager. You Ray Luv’s manager; you goin’ be my manager. I’m coming out.” She was like “Man, OK. All right.” You feel?

So I’m not even knowing the whole history wit’ Pac, Leila and Ray Luv – the whole Strictly Dope thing. If you saw “Thug Angel,” you know what I’m talkin’ about. So I’m at a E-40 “Practice Lookin’ Hard” video. I’m there wit’ my cousin Shonda and Lynn, may she rest in peace. 40 is my cousin, you know what I mean?

So out of the blue, guess who comes? The biggest rapper in the world, Tupac. He’s there wit’ Stretch, he there wit’ Mike Cooley, he there wit’ Man-Man, you feel? Now me, man, I come from a neighborhood and a whole mind state where the way you cut into a man means so much. You can’t just come up to a man and be on some other stuff. You got to cut into him right. Look him in the eye, shake his hand firmly, you know what I mean? It’s rules.

So I waited my turn, I come up to him, and I shake his hand and tell him who I am and started running my pedigree. “Check this out, man, my name is Mac Mall. I’m from the Crestside of Vallejo. I know he knew who we was because we done funked, our hoods done funked back in the day. For real. What’s up wit’ the Jungle. Much love, you feel? It been crazy. So he knows us, you know what I mean?

You know that’s how Pac gets down, right? He’s doing that in front of me, I’m like wow. He’s like “I love your record, man; I want to do the video” right then and there. Dude, I’m a Gemini; my birthday is the 14th, and his is the 16th. I know, we go off our feelings. So I know he was feeling it, like “Man, I want to do your video” that day. He told me that. I’m like, man, I’m kind of threw off.

So I meet dude and tell him who my manager is, and he’s like “Man, you don’t even know. Man, I’m gonna call you folks.” I’m like dang, OK. The next thing I know, he called and he was at Young Black Brotha (Records). Even to this day, I’m going to tell you, J, I asked myself, “Why me?” Why did dude take me from outta … I’m in the Crest, man. I ain’t really just all the way started yet, you feel? Why would he even look at me and be like “Cuddie, I’m going to put my arm around you”?

Man, I’m in high school. Dude took me to the Soultrain Awards and made me sit up front wit’ him. I’m right there by Madonna and Dr. Dre and them, whatever. I’m sitting wit’ Pac. You feel? Coming straight from the Crestside. My mama told him no, I couldn’t go because my grades was bad. Even to this day, man, I don’t know. Maybe he saw something. Who knows, cuz? But he did, and I feel privileged, and I would never cheapen our relationship wit’ trying to use, you now what I mean?

Messing wit’ Pac, I did a song with Quincy Jones, man, just on the Pac thing, man. It’s called “Starry Night.” It’s on the “Roses That Grew From Concrete” record. Straight up. Real talk. Tupac, I love ’im. I think about him every day like I think about Mac Dre and Johnny Cash and all the others we den lost.