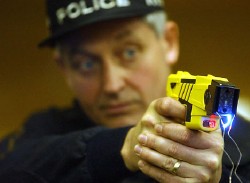 It seems that there’s a new, easy-way-out solution for security people having to deal with troubled kids who act out or cause disruptions in school: Taser them!

That’s right. Zap them with electricity. Elementary and high schools across this great land of ours are hiring security guards equipped with the nasty little weapons that the manufacturers call “non-lethal.” In fact, over 4,000 law enforcement agencies now arm their security people with Tasers.

It may seem like a cute little science-fiction device; its name even rhymes with “phaser,” the futuristic weapon that the crew of the U.S.S. Enterprise carried on their intergalactic travels.

In all its years on TV, the Star Trek crew’s phrasers probably never killed as many people as the “non-lethal” Tasers of today: 334 deaths in just seven years, many of them young people. Amnesty International, in a 2008 report, says that those folks died from cardiac or respiratory arrest. The vast majority – 299 – were unarmed.

According to a 2007 British committee on less lethal weapons report, children are more vulnerable to serious injury or death from Tasers. “Until more research is undertaken to clarify the vulnerability of children to taser currents,” the report said, “children and persons of small stature should be considered at possible greater risk than adults.”

These studies haven’t discouraged trigger-happy Taser guards or cops. Alternet.org recently reported on some of the many young victims of the latest crime-fighting device. Not surprisingly, they’re anything but hard-core criminals. Consider the 12-year-old autistic boy in California, and the high school student in Pennsylvania who refused to hang up his cellphone.

A tasered high schooler in Bunn, North Carolina, described what happened to her: “When I was on the ground crying and shaking, he asked me, ‘Was it enough? Are you calmed down now?’ and he did it again.”

The adult victims of Tasers include a pregnant woman and a grandfather tasered at a Virginia baptism ceremony that got a little loud, and a great grandmother in Texas who was zapped by a police officer twice her size and weight.

Houston, we have a serious problem.

It’s a problem that Jacksonville, Florida, realized after the city’s Sheriff’s Office signed a $1.8 million contract with Taser International to equip the local cops as well as school guards with the weapons.

The contract was officially put on hold after a 65-pound, 13-year-old girl was repeatedly tasered while in handcuffs inside of a police car.

It’s bad enough that kids bring easily available (thank you, NRA!) guns into schools and join gangs that are far scarier than the ones that were around when I was a kid.

I know that administrators want to keep their schools safe, but they don’t need to resort to hiring guards that victimize nonviolent behavior and terrorize students who don’t have arms.

Tommi Avicolli Mecca is co-editor of “Avanti Popolo: Italians Sailing Beyond Columbus,” and editor of “Smash the Church, Smash the State: The Early Years of Gay Liberation,” which has just been nominated for an American Library Association award. His website is www.avicollimecca.com. This story first appeared at BeyondChron.org.