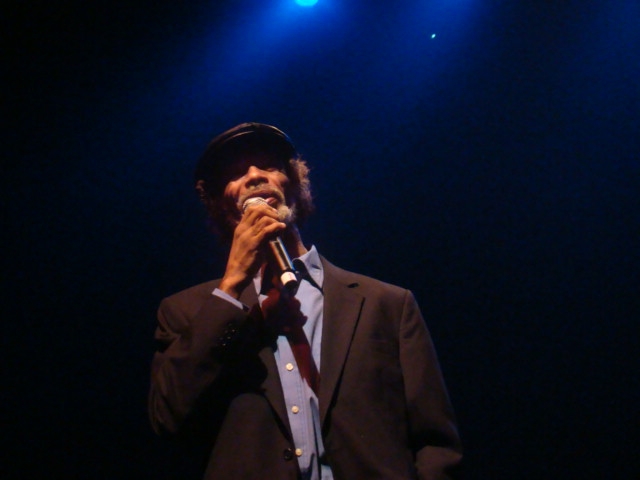 I had to publish more of this interview with the legendary Gil Scott Heron because a whole lot of readers personally got at me and told me that it was too short. They told me that they wanted to hear more of what he had to say. If y’all want to read interview installments 3 and 4, y’all are goin’ to have to vote and put your bid in, because I literally had to transcribe this interview that was done for radio by hand. Otherwise you can wait until the Oct. 19, when it will premiere on Greg Bridges’ show, Transitions on Traditions, which airs on 94.1FM in Northern Cali (kpfa.org) at 9 p.m. Enough on that.

The legendary Gil Scott Heron is one of my favorite musicians of all time, right next to Pac, so it was an honor for me to do this candid interview wit’ him. Since Part 1 was published, Gil performed in San Francisco at the Regency Ballroom, to a packed house. He sounded good and looked strong. He played a string of hits back to back to back. People of all ages were in the aisles dancing, singing lyrics and the whole 9. Peep the great Gil Scott Heron in his own words.

M.O.I. JR: Now when you look back at your catalogue of music over the decades and you look at the Last Poets’ music and their poems, do you see a similarity or is that just a situation where a lot of us that didn’t live at that time period group it all together? And I’m telling you that we do group it all together. Do you see a similarity among your peers, specifically the Last Poets?

Gil Scott Heron: Well “The Revolution Will Not Be Televised” that became popular featured Ron Carter on bass – he was also on flute – and Bernard Purdie on drums. You can make whatever paralell that you want to between that group of musicians and the people that were performing with the Last Poets. There is only a very thin connection there, if you can understand where I’m coming from.

M.O.I. JR: Yes sir. Well you, the Last Poets and H. Rap Brown (Imam Jamil Al-Amin) have been seen as some of the predecessors of rap or Hip Hop, where you were talkin’ over a beat. You were one of the first that I had heard of, or I should say your recordings are some of the first that I had heard where somebody was doing this, and this is before it was termed rap music or hip hop. How do you see the birth of rap music, being an elder statesman in poetry and revolutionary cultural work?

I think speaking in rhythm and having somebody who plays the rhythm coming in behind them is like a natural sort of growth. But we’ve always talked in rhythm, we’ve always had drums in our community and in our past, and I think most of our things have some kind of rhythmic connection if people are going to listen to it and get into it.

Hell, from Berkeley to Botswana, you know, it would seem as though rhythm has been our nature. It’s within us and the way we perform and the way we talk to each other. So I see the connection as being something natural that we’ve enhanced and grown up with, and that it is something instinctive. It is something we do and gravitate towards. I don’t think there’s anything magnanimous about it.

From Berkeley to Botswana, you know, it would seem as though rhythm has been our nature. It’s within us and the way we perform and the way we talk to each other.

Gil Scott Heron: It’s sort of like a corner that you push artists into when you call them that. I performed with Mos Def at Carnegie Hall in New York. Carnegie Hall is not a hip hop venue; it is one of the most significant classical music places in the world. You put people in a corner if they do something that is political and they become political artists. 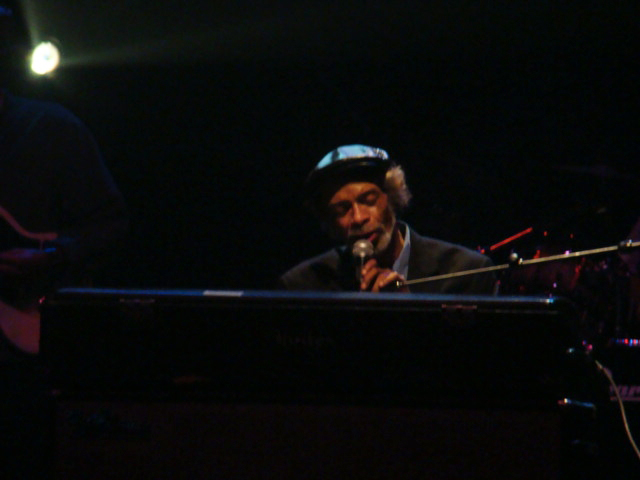 I think like if you pick that particular tune to decide that’s what kind of artists we are, you overlook what the hell the whole album said. And you don’t just do one tune and let it stand for you; you do albums and you do ideas, and all of those ideas are significant to you at the time you’re working on them.

So yeah, we include politics in our work because you pay taxes. Everybody does. And as long as you do, you’re a part of the community that has to go under the scrutiny for that, but it doesn’t make you a political person. It makes you a taxpayer.

And if you pay taxes, then you’re entitled to the things you’re asking for. You’re not protesting. You’re trying to get the things that you already paid for. And this was the attitude we took and this was the sort of frame of mind we were in.

M.O.I. JR: It’s crazy that you said that you don’t really feel like your music was political …

Gil Scott Heron: I’m saying one out of 11 on the first album was political. Nobody can name another political tune on there on that album. So if they decide that that one was more important than the other 10, then they can do that, but we didn’t. We thought that they were all good.

M.O.I. JR: Right. Right. I agree with you 100 percent. But I’m familiar in particular with that album and “Home is Where the Hatred Is” is where you don’t want to go home and getting high and “the needle mark” and the “white powder dreams” …

Gil Scott Heron: But see what I’m saying is, once again you must realize that every song you sing is not representative of you; it is representative of your community. There was a guy in my community named … I’m not going to name him, but he was an all-city basketball player. He started hanging out with certain people and started to skin pop and go through them changes.

And every night he would come through the neighborhood talkin’ ‘bout he didn’t want to go home, but he needed to. And that he wasn’t going home – he was going tomorrow – and we all had to listen to that every night because the quantity. He knew he was going in the wrong direction and wanted to change his mind in a certain direction.

This was his song. It was not mine, in terms of where it came from. You take all of these different ideas, and you’re not all of those people; you are trying to represent them and say something about how their life is going and what’s happening in the community.

Actually I am paranoid about needles. My mother was a diabetic, and she tried to show me how to give her an insulin shot, and I said I will be with you Mama, but I will call 911 (laughing). If I get a hole in my socks, I throw the socks away. I’m not sewing them up. (laughing).

That’s just how it is. I’m not trying dodge nothing or duck nothing. I’m trying to tell you when you write songs, sometimes it’s because of people you know whose ideas need to be spoke about. And they can’t do that; you have to. So you represent them when you sing that song.