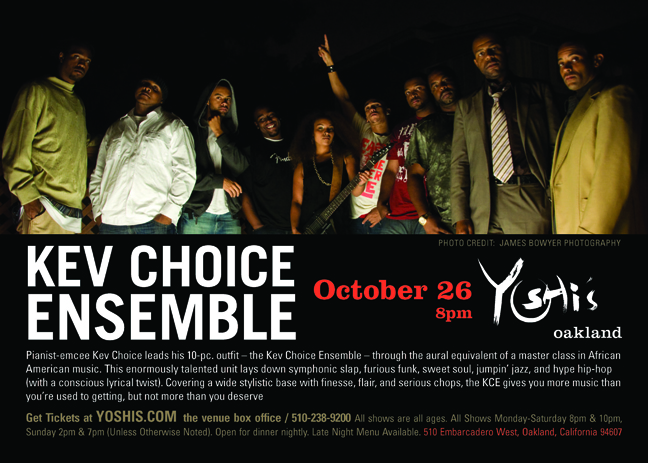 Kev Choice is one of the the dopest young musicians I know in Oakland. And I would have to say that L-Boogie aka Lauryn Hill agrees with me, since she hired this dude to be her band leader. Kev Choice tickles the keys like Herbie, emcees like Posdonous and is a band leader like Duke Ellington. In the era of beat machines and djs, he’s the Bay’s music renaissance man.

Check him and the Kev Choice Ensemble out at Yoshi’s in Oakland on Monday, Oct. 26, at 8 p.m. Here’s the man in his own words.

M.O.I. JR: We’ve been knowing each other for a while but never sat down to do an interview. This is a long time coming. How did you become interested in being a musician? What do you play?

Kev Choice: Yes, it is a long time coming but now is the perfect time! I always had an interest in being an “entertainer” of some form since I was a child. I started taking piano lessons at the age of 11 at Westlake Junior High in Oakland and it took off from there. I started rapping around the same time, writing poems and stuff and making little beats to go along with them.

M.O.I. JR: Who were some of your inspirations?

Kev Choice: My inspirations range from jazz to hip-hop to classical to soul music. But pretty much “the greats” of any genre, people who dedicated their lives to communicating with their instruments, their voice, their art, and who are constantly pushing themselves and others with their music. It’s so many to name, ranging from legends in jazz like Coltrane, Herbie Hancock, Bud Powell, Thelonious Monk, George Duke to newer cats like Roy Hargrove and Robert Glasper to fusion groups such as Weather Report and Return to Forever. Also classical composers like Chopin, Bach, Ravel, Beethoven and the like. 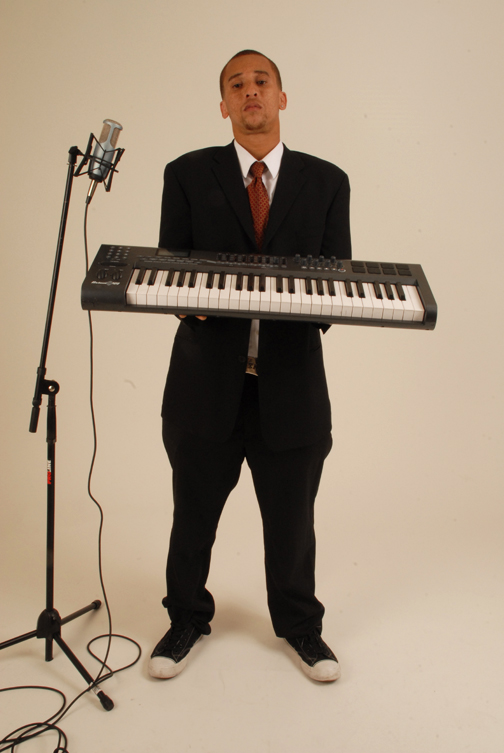 But also, in hip-hop, people like Rakim, Tupac, Nas, Saafir, Hieroglyphics, Lauryn Hill and soul artists like Stevie Wonder, Marvin Gaye, Michael Jackson, Prince, D’angelo, pretty much like I said, “the greats.” I’m also generally inspired just by everyday people, who live their lives and may not be able to express themselves with instruments but appreciate and encourage what I do.

M.O.I. JR: What are you going to be performing at your show at Yoshi’s in a few days?

Kev Choice: The show at Yoshi’s is going to be a presentation of The Kev Choice Ensemble, an 11-piece band, and what we do best:, high energy music, grounded in hip-hop, but organized like a long movement of a classical symphony in that it flows all together, with heavy doses and references to jazz, rock, funk and soul. I’m going to be playing on a grand piano, which gives me the ability to showcase my full range as a pianist.

Also, going to showcase the members of the band as much as possible and give everyone a chance to show how talented they are and how powerful a force we are together. Plus, I have a few special guests coming through. I feel we are one of the best bands in the Bay Area and I seek to prove that every time we step on a stage.

M.O.I. JR: How did you become Lauryn Hill’s band leader? Where did you tour with her? Do you still work together?

Kev Choice: I met Lauryn Hill through a mutual associate while she was out here looking for musicians. She was having an “audition” at this studio out here, and I was invited. I went, she started playing something and asked me to follow her and I just jumped in and we started vibing. From there I got a call that night, asking to do a studio session with her and that turned out cool too.

From there she asked me to put together musicians to rehearse, so I started calling cats and eventually we had a 12-piece band rehearsing every day getting ready for shows. We toured Hawaii, Japan, Brazil, Europe and a few U.S. dates. I haven’t heard from her in a while. She had a new child and had stopped touring for a while. I learned a lot from her though and wouldn’t trade that experience for anything.

M.O.I. JR: Being a young musician that grew up during the rap era, do you feel our generation has contributed something to music, like generations in the past who were playing instruments instead of sampling and looping?

Kev Choice: I feel we have contributed, because not all of us are sampling and looping. Maybe not with hip hop, but in R&B, soul, gospel and jazz, there are a lot of highly talented musicians of our generation.

Also, sampling and looping is an art in itself. Cats like J Dilla, Dj Premier, Kanye West, Dr. Dre, Timbaland, Neptunes, RZA may not have played instruments, but they contributed to the evolution of the sound of music of today. We live in the technology age, so it’s only logical that they would use the resource available to them.

M.O.I. JR: What motivated you to do a song about Oscar Grant and Lovelle Mixon? [The song, “Hopefully,” is posted below.] Will you be performing it at Yoshi’s?

Kev Choice: Just being a part of this Oakland community and seeing how the situations occurred and affected the people of this community and as being an artist, it just inspired me to express my feelings on it and give my perspective. Going to meetings and rallies about Oscar Grant and seeing how people were organizing and fighting to have their voices heard, it was inspiring.

It takes a lot of courage. People put a lot on the line for the causes of police brutality and injustices, so it’s the least I can do as an artist to bring some attention to what’s going on so people don’t forget. Also, with Lovelle Mixon, it was an unfortunate situation, and it just reminded me of a lot of young brothers in our community who get caught up in the wrong things sometime.

There are usually a lot of reasons behind that that people aren’t made aware of. They just get painted as villains. But like I say in the song, “I’m not saying that it’s justified to take a life, but until you walk in someone else shoes you don’t know what it’s like. The weight of the world and burdens is heavy, and maybe in his mind he was gone already.”

Being a part of the criminal system, it’s not really rehabilitating and a lot of cats come out feeling hopeless and with no opportunities, which can lead them to doing drastic things. If there was more access to jobs and counseling and assistance with adapting to everyday life, we would most likely see less repeat offenders and cats turning to drugs and things like that. I will perform the song at Yoshi’s most definitely.

by the Kev Choice Ensemble

Choice of words: an interview with MC and pianist Kev Choice