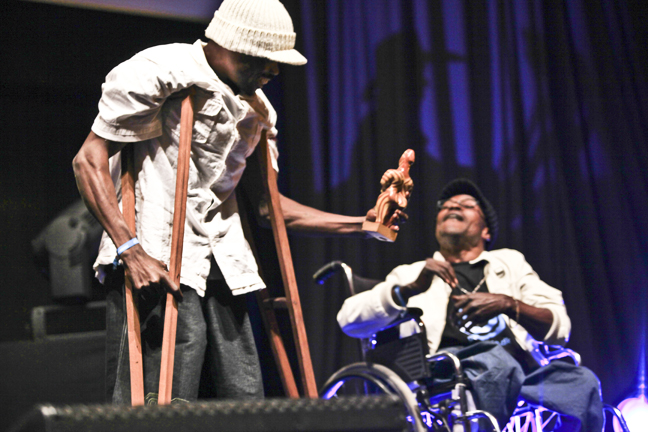 I like when things come together! I can’t ask for anything better. Nov. 1, 2009, wrapped family, disabled musicians, traveling and my 42nd birthday all into one big present to myself.

After two years of researching paraplegic street musicians, I found out that Staff Benda Bilili (Staff for short), who live around the grounds of the zoo in Kinshasa, Congo, released their album and were invited to perform at the annual WOMEX Festival – World Music Expo. WOMEX has moved to Copenhagen, Denmark, which is also home to my sister, Pamela Juhl, and her two lovely children. I had no excuse not to go and visit with my sister and nephews and at the same time meet and interview the members of Staff Benda Bilili with Copenhagen Voice, founded by my sister. Yes, both my sister and I are journalists for the people!

WOMEX is an international event that brings together professionals from the worlds of folk, roots, ethnic and traditional music and includes concerts, conferences and documentary films. It contributes to networking as an effective means of promoting music and culture of all kinds across frontiers. This year WOMEX announced its 2009 awardee: Staff Benda Bilili.

After more than eight years, I finally had a chance to see my sister Pamela. As her brother, I was so happy to create media content with her at the WOMEX Festival right in her office, located in the center of Copenhagen, the day before my birthday.

Copenhagen Voice agreed to have me on their media crew at the WOMEX Festival, covering one of the most incredible bands I ever researched and wrote about: Staff Benda Bilili of the Congo. I’d had a chance to connect last year with the filmmaker, Florent de La Tullaye, who is shooting a documentary on the band and who translated my first interview with them when he traveled to the Congo to continue shooting the film, which will be out in early 2010.

Florent emailed me the band’s replies and pictures and sent a copy of their CD almost a year ago, which I am so grateful for. There are many reasons why Staff Benda Bilili caught my attention. One of them was seeing an all disabled band singing about real issues in their lives – like poverty, homelessness, disability and street kids. It just blew me away as a Black disabled activist, journalist, poet and lover of music.

So now, the day after meeting and interviewing the members of Staff Benda Bilili, Nov. 2, my birthday, I’m still thrilled about this opportunity and the interview below. Read on.

I almost didn’t make the WOMEX Festival! I was in Augsburg, Germany, doing some Krip-Hop/ Mcees With Disabilities business with Binki Woi when I found out that my credit card was denied when I’d tried to buy an airplane ticket to Copenhagen.

The night of Nov. 1 was freezing as I walked the dark, cold streets of Copenhagen with the crew of Copenhagen Voice and a friend of my sister, Line Mompremier, who is a Haitian-American living in Denmark. Thank God she knew French and was down to be our translator on a last minute basis. We were heading over to Global Club, where Staff Benda Bilili was about to perform and where the interview was going to take place backstage prior to their concert.

After reading other interviews online by different reporters, I noticed that very little was written about the political views and the strong activism of the members of Staff, so I chose that to be my interviewer angle. The Copenhagen Voice, Line and I stepped into a dark hall where two middle aged people greeted us with some questions. They knew we were there for the interview, thanks to Copenhagen Voice preparing the way. We were led to the stage that had a portable, unstable ramp that pointed us to the backstage.

Walking in, I first noticed that the group members of Staff were in regular wheelchairs, not in their customized handmade tricycles that they travel the streets of Kinshasa in. You must check out their handmade tricycles! Watch the trailer below.

The members of Staff Benda Bilili are Ricky Likabu, the bandleader; Coco Ngambali, who sings, plays the guitar and composed many of the band’s songs; Theo Nsituvuidi, the soprano singer; and Roger Landu, a 17-year-old who was adopted by Ricky many years ago. Roger sings and plays an instrument he created called Satonge, a one-string guitar. Djunana Tanga-Suele is a singer and so are Zadis Mbulu Nzungu and Kabamba Kabose Kasungo. Paulin “Cavalier” Kiara-Maigi plays the bass, Cubain Kabeya plays the drums and sings and, finally, Randy Buda plays percussion. Read more about Roger’s instrument at http://www.myspace.com/staffbendabilili. During the interview, Ricky and Michel, the manager, answered almost all the questions. 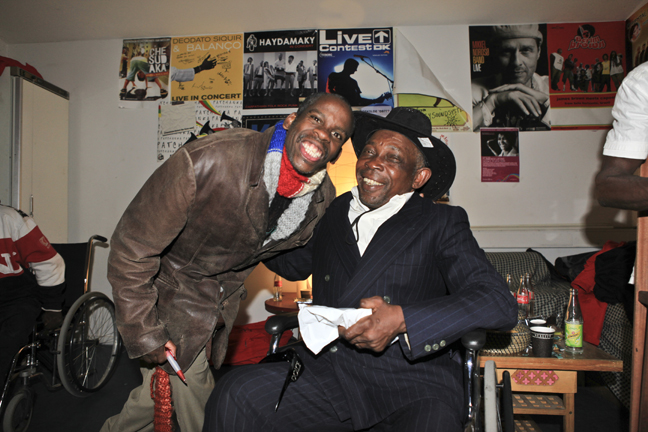 Staff Benda Bilili recorded a song in 2007 which successfully increased voter turnout to 70 percent in the Congo. They collaborated on production with MONUC, the U.N. Mission in the Congo, and on distribution with UNDP, the U.N. Development Program.

Although the song was a hit before their album came out with a showering of international fame, they were denied their legal “inalienable rights” to copyright their song and no contracts were offered to secure their rights. They pretty much got stiffed on royalty earnings, receiving only a meager one-time payment of $50 per band member. The BBC covered the fraud in a story headlined “Disabled Congo singers to sue UN.”

Even though they had a lawyer at the time, it was unclear how this issue panned out. Today, the band replied, so much time has elapsed since the initial legal dispute with the U.N., they had decided to let go of the case and wanted to simply move forward with more positive music partnerships.

Before this interview, what really made me love Staff was more than their music; it was their political views about life in the Congo as people living in poverty and being disabled. So, when I asked them about their political views and a quote from my previous interview about considering themselves the real journalists of Kinshasa, I was shocked when their manager spoke up, saying there was a misunderstanding; “the group never said that.”

This is the quote from my interview with them in 2008: “’In our songs, we are the true press. We talk about street life, the street kids and their dreams of happiness; we talk about corruption … The press here is a slave to power. I consider myself a journalist whose duty it is to speak the truth,’ said Coco, a co-founder and leader of the group.”

I thought the denial was strange because the same statement is in the insert in Staff’s CD. I also realized, though, that the band members were very tired and were dealing with a whole new way of life touring Europe: the cold weather in Denmark, their new wheelchairs, clothes, getting used to the food, traveling and being managed. Wanting to make sure they can live off their music could be making them cautious. I wonder if I met them on their turf around Kinshasa’s Zoo in the Congo, would Staff tell me the political stories that my questions were fishing for.

The lyrics of the 11 songs on Staff’s CD tell of poor people in the Congo. “Tonkara,” track 8, is about the kids who sleep on cardboard outdoors. They live and sing on the streets, Ricky says. The first track, entitled “Moto Moindo,” or “Black Man,” warns Black men in Africa that their food, the Earth and nature itself is being corrupted, so they should stand up, come together and take action.

Staff used to have a center where they taught street kids how to build instruments and wheelchairs and play music until it was completely destroyed by fire in 2005. Currently, local business people in the Congo, some private organizations and benefactors from the U.S. are in the process of rebuilding the center.

Staff Benda Bilili is still looking for a sponsor to facilitate a U.S. tour – a harder challenge, their music manager told me, than finding a sponsor to tour Europe, where they have been since October.

In the U.S., people with disabilities have made disability a civil rights issue. In recent years, it has become a cultural lens giving us insight into our own history, art, music and lifestyle. Disabilities are not something you overcome; they are a part of the person.

But I’m surprised when I travel abroad and even sometimes in the U.S. at the perspectives of people with disabilities. When I asked Ricky of Staff Benda Bilili to give some advice to poor and disabled people around the world, he said, “Disability is all in the head and you, people with disabilities, have to be independent.” I scratched my head and thought, “Was that advice too simple, to pull yourself up by your bootstraps?”

The members of Staff Benda Bilili are hoping that after the tour and the release of their documentary film they can afford to buy their own house. Noticing that Staff is all men, my last question was have they sung with disabled women? Coco answered, “Yes, we do.”

After the interview was the concert. To go with my sister to see Black talented disabled musicians singing about their lives the day before my birthday was a dream come true. It truly doesn’t get any better than this!

Thanks for the friendship of Florent da La Tullaye, who helped me connect with Staff Benda Bilili over a year ago and, last but not least, thanks to the members of Staff Benda Bilili for being you, for your political lyrics and for reppin’ people who live in poverty and who are disabled!

Question for the reader: What happens to people who go from living on the streets – poor but speaking their minds about their situation – to being managed by others who have the means to bring them wealth and fame? What happens when people from outside your world can take you out of your struggle and you hold back your politics – your voice – so you can make a living? These are the questions I have after reading both interviews of Staff Benda Bilili and meeting them live.

Artist, activist and journalist Leroy Moore can be reached at blackkrip@gmail.com.

Florent de La Tullaye describes his film as “four years in the life of a handicapped band on their way to success. From the sidewalks of Kinshasa to their first concert in Europe. A tale of courage and dignity. A film by Renaud Barret and Florent de La Tullaye.”