by Nunu Kidane and Gerald Lenoir 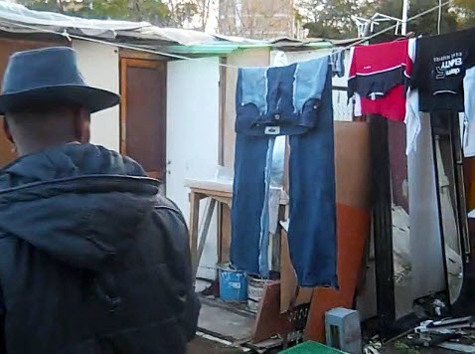 This is the second of a series of reports from Nunu Kidane, director of Priority Africa Network, www.priorityafrica.org and Gerald Lenoir, director of the Black Alliance for Just Immigration, www.blackalliance.org who are spending two weeks in Italy and Greece to learn more about the plight of African refugees as they make their way to Europe to find work to support themselves and their families back home. They are also attending the Global Forum on Migration and Development and the People’s Global Action on Migration, Development and Human Rights, both in Athens. This is the first of several reports they will be filing about their impressions, conversations with migrants and what they are learning.

Rome, Oct. 29-31 – The historic city of Rome is known for breathtaking sights from the Vatican to the Coliseum and beyond. However, there are little known areas not far from the historic routes frequented by tourists, areas where large numbers of refugees from a number of countries reside in poverty but with dignity.

We spent a day visiting with activists and refugees who live in these areas. The most well known are Ponte Mammolo, Ana Nina and Colitana where refugee squatters desperate for shelter inhabit substandard housing.

As our hosts informed us, the Italian government does not take responsibility for providing permanent housing for refugees. After their initial processing, refugees are provided with documents and a place to sleep in camps for a period of six months to a year. They are then released into the public to find housing on their own. One activist told us that there are over 30,000 refugees in Rome but only 3,000 have housing.

Unemployed and with few resources, many people sleep on the streets with nothing but cardboard walls to fight the bitter winter cold that sweeps in for the better part of the year. The majority of them frequent the area around the Statione Termini (the central terminal for trains and buses). But police discourage them by making their rounds regularly and forcing them to move.

With few options for housing, a group of Eritreans we met recently took over an office building in Colitana. After the completion of the building, engineers found that the water below the foundation made it unsafe for occupancy and the owners abandoned it. A group of Italian activists known as “Movement Action” who are fighting for the rights of the homeless to have shelter informed the refugees of its availability.

It is one of the most coveted living spaces because it has solid walls, access to water and even heating. About 200 individuals live there. Of these, we were told that less than 10 percent are women and there are no children. There is no security in these quarters because police can move the refugees out at any time. There is also the constant fear of having their space invaded by gangs and outsiders, which makes the women in particular highly vulnerable.

The site we visited is in Ponte Mammolo located near the center of the city of Rome. The space, originally an open “garden” area with one little shed, was discovered by chance and inhabited by an Eritrean individual. Soon others came seeking shelter from the cold. As the community grew, they started constructing structures with cinder blocks and sheetrock, using tin roofs to keep out the rain. Shabby to look at and structurally unsound, the makeshift housing is a welcomed haven from the open streets. (See the video tour of Ponte Mammolo below.)

It was difficult for us to believe that such a place exists so close to the city’s most beautiful tourist attractions. We had spent a couple of days walking the streets packed with hotels, restaurants, coffee shops, bars and well dressed people from all parts of the world. There were no indicators that so close to us were people living in a shantytown.

There is an undeniable resemblance to the shantytown areas of Soweto that housed hundreds of thousands of families during the days of apartheid and that is still home to many outside Johannesburg, South Africa. The mark of apartheid in the city of Rome is there in full view and yet virtually invisible to most Italians.

The residents are mostly young men; of the 70 or so people who live there, only about four are women. They were grateful that their neighbors do not give them a hard time and the police hardly ever come to harass them.

About four years ago, a fire broke out in the housing units. Luckily, no one was killed but some people were seriously injured. The residents called the fire department, which responded to the fire three hours later. By then, the fire had died down, having done extensive damage. Many were again left homeless.

It took a lot to put the community back together again. They received donations from churches and generous individuals to help them rebuild. They used their hands and their skills to construct new homes that resembled the small multi-family row housing units in the city of Asmara, Eritrea. They showed great ingenuity by building five breakers that connect to a nearby streetlight to provide lighting to the houses. Unfortunately, the power is weak and cannot generate enough energy for cooking and refrigeration, so they use gasoline-powered hot plates to cook. Water is available from only one source and each housing unit uses buckets to carry the water home for washing their clothes and dishes and for bathing.

Anyone viewing the video clippings will be appalled to see such a standard of living in a European city and a country that is supposedly a “first world” economic and military superpower and a member of the G9 that supposedly donates millions to eradicate poverty in the “Third World.”

For food, those who have intermittent incomes from day labor work purchase food and cook in their units. Others go to the homeless shelter run by Caritas, a Catholic charitable organization, where they can get one meal per day. One of the young Eritrean men told us how ashamed he is to go there for a meal and does it only as a desperate measure. The soup kitchen, he says, is full of people who are old, handicapped and unable to take care of themselves. He said he is young, able and willing to work and wants to maintain his dignity and earn his keep.

But Italy does not have jobs, not even for many of its own citizens. The economic conditions do not seem to be improving and the future looks bleak for the refugees of Rome.

One of the refugees we met talked about the Dublin Regulation, one of the least known of the European Union’s immigration policies that went into effect in 2003. The regulation essentially follows the Geneva Convention in stating that the first country an asylum seeker lands in is the country that will process his/her application and where the refugee must remain.

This has meant that the border states that are closest to the Mediterranean – Italy, Spain, the Island of Malta and Greece – have been the recipients of a disproportionate number of refugees. If a refugee lands in any one of these countries, his application is processed there and he is expected to remain in the country. Given the lack of adequate housing and opportunities in these countries, refugees are constantly moving further north.

Although the regulation went into effect nearly six years ago, it has only been since 2008 that the fingerprinting system and exchange throughout the European Union countries became operational. It is known as EURODAC: European Union automated fingerprint identification. Those who leave the country of their first arrival and attempt to unite with their families or even exercise their free choice of movement to change to another country find that their fingerprints are traced and they are returned to the country where they first arrived.

This regulation has brought countless hardship to the refugees we spoke to. Unable to work and make a living, with no access to shelter or food or any of the basic necessities and, in many instances, with the desire to unite with their families, refugees attempt to leave repeatedly. Knowing full well that their fingerprints will identify them, they attempt to destroy any trace of fingerprints using means that cause of unspeakable pain.

There are three ways commonly used to remove fingerprints. Refugees burn their own fingerprints and palm prints with a lit cigarette. This painstaking and slow process can take several hours. It leaves their fingers and hands in constant pain and unusable. Soon blisters appear and infection can spread.

Another method used by many refugees is to place their hands directly over a gas, charcoal or electric stove or immerse them in scalding water to remove their fingerprints and palm prints. This is no less painful than using a lit cigarette.

The third process requires rub sandpaper against their skin. It may seem comparatively less painful, but not so. Two or three days of rubbing their fingers and palms with sand paper to entirely remove the top skin leaves their hands raw and bloody. 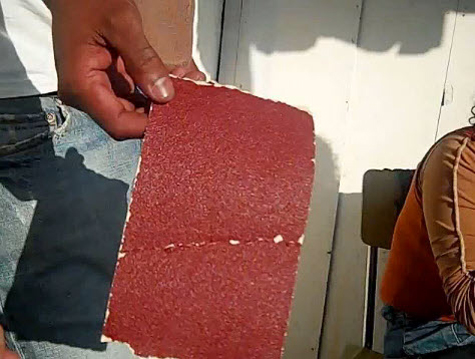 Those who showed us their hands felt driven to this extreme as a desperate measure to escape what they consider unlivable circumstances. They said these painful steps are deeply damaging to them physically but are “only temporary.” If they succeed in making it outside the countries, they consider it worth the price of such pain.

Unfortunately, the authorities in other countries know of these steps. One of the Eritrean brothers brought out a piece of sandpaper and demonstrated to us how he used it to obliterate his fingerprints. Another young man told us that he was able to destroy his prints and made it to England to find work. But eventually he was arrested and when his hands healed two weeks later, a fingerprint check gave him away. He was deported back to Italy, back to no home and no work.

This policy that is bringing inhumane pain and suffering to refugees is fully known by all immigration authorities in Europe. There is already a proposed change to the Dublin Regulation that is expected to take place sometime in 2011. The change is not out of consideration of the difficulties refugees are facing but is in response to the outcries and demands of the frontline countries in Europe that are pushing for equitable “burden-sharing” of the number of refugees that are coming across their borders.

The young men we met with seemed in a quandary about how to change their dire circumstances. “Without hope, people will perish,” one young man said, paraphrasing a Biblical proverb. But, as if to buoy his own spirit, he quickly added, “Hope springs eternal.”

Nunu Kidane can be reached at nunukidane@att.net and Gerald Lenoir at bajimail@yahoo.com. This investigative mission was supported by a grant from USA for Africa and the facilitation and logistical assistance of Manfred Bergmann from CADI (Comitato Antirazzista Durban Italia). The writers also thank the director of Progetto Tarik, Gianluca Avanzato.