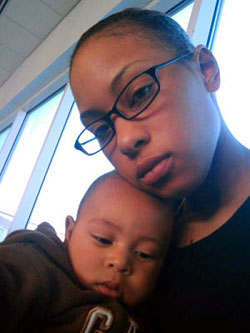 Ventura, Calif. (IPS) – U.S. Army Specialist Alexis Hutchinson, a single mother, is being threatened with a military court martial if she does not agree to deploy to Afghanistan, despite having been told she would be granted extra time to find someone to care for her 11-month-old son while she is overseas.

Hutchinson, of Oakland, California, is currently being confined at Hunter Army Airfield near Savannah, Georgia, after being arrested. Her son was placed into a county foster care system.

Hutchinson has been threatened with a court martial if she does not agree to deploy to Afghanistan on Sunday, Nov. 15. She has been attempting to find someone to take care of her child, Kamani, while she is deployed overseas, but to no avail.

According to the family care plan of the U.S. Army, Hutchinson was allowed to fly to California and leave her son with her mother, Angelique Hughes of Oakland.

However, after a week of caring for the child, Hughes realized she was unable to care for Kamani along with her other duties of caring for a daughter with special needs, her ailing mother, and an ailing sister.

However, only a few days before Hutchinson’s original deployment date, she was told by the Army she would not get the time extension after all and would have to deploy, despite not having found anyone to care for her child.

Faced with this choice, Hutchinson chose not to show up for her plane to Afghanistan. The military arrested her and placed her child in the county foster care system.

Currently, Hutchinson is scheduled to fly to Afghanistan on Sunday for a special court martial, where she then faces up to one year in jail. [At latest word, she has been given a short reprieve. – ed.]

Hutchinson’s civilian lawyer, Rai Sue Sussman, told IPS: “The core issue is that they are asking her to make an inhumane choice. She did not have a complete family care plan, meaning she did not find someone to provide long-term care for her child. She’s required to have a complete family care plan, and was told she’d have an extension, but then they changed it on her.”

Hutchinson’s mother has flown to Georgia to retrieve the baby, but is overwhelmed and does not feel able to provide long-term care for the child.

According to Sussman, the soldier needs more time to find someone to care for her infant, but does not as yet have friends or family able to do so.

Sussman says Hutchinson told her: “It is outrageous that they would deploy a single mother without a complete and current family care plan. I would like to find someone I trust who can take care of my son, but I cannot force my family to do this. They are dealing with their own health issues.”

Sussman told IPS that the Army’s JAG (Judge Advocate General) attorney, Capt. Ed Whitford, “told me they thought her chain of command thought she was trying to get out of her deployment by using her child as an excuse.”

Major Gallagher of Hutchinson’s unit also told Sussman that he did not believe it was a real family crisis and that Hutchinson’s “mother should have been able to take care of the baby.”

In addition, according to Sussman, a First Sergeant Gephart “told me he thought she [Hutchinson] was pulling her family care plan stuff to get out of her deployment.”

“To me it sounds completely bogus,” Sussman told IPS. “I think what they are actually going to do is have her spend her year deployment in Afghanistan, then court martial her back here upon her return. This would do irreparable harm to her child. I think they are doing this to punish her, because they think she is lying.”

Sussman explained that she believes the best possible outcome is for the Army to either give Hutchinson the extension they had said she would receive so that she can find someone to care for her infant, or barring this, to simply discharge her so she can take care of her child.

Nevertheless, Hutchinson is simply asking for the time extension to complete her family care plan and not to be discharged.

“I’m outraged by this,” Sussman told IPS, “I’ve never gone to the media with a military client, but this situation is just completely over the top.”

Dahr Jamail’s new book, “The Will to Resist: Soldiers Who Refuse to Fight in Iraq and Afghanistan,” is now available. Order it at http://tinyurl.com/cnlgyu. As one of the first and few unembedded Western journalists to report the truth about how the United States has destroyed, not liberated, Iraqi society in his book “Beyond the Green Zone,” Jamail now investigates the under-reported but growing antiwar resistance of American GIs. Gathering the stories of these courageous men and women, Jamail shows us that far from “supporting our troops,” politicians have betrayed them at every turn. Finally, Jamail shows us that the true heroes of the criminal tragedy of the Iraq War are those brave enough to say no. Visit his website at http://dahrjamailiraq.com. The Bay View is proud to have been one of the first newspapers to publish his dispatches. This story first appeared at Inter Press Service.

Action alert from Courage to Resist