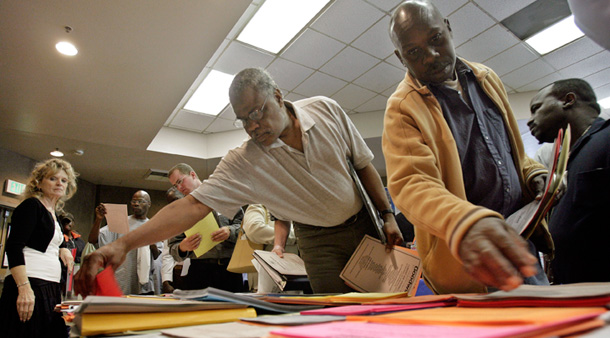 A bloc of African American House Democrats, angry and worried that not enough is being done about high unemployment by the administration, forced the postponement of a much-anticipated vote Thursday on comprehensive financial regulation reform.

The Financial Services Committee had finished hearing amendments around 3 p.m. and recessed, planning to return at 4 for a final vote on the package. But during the break, some of the Democrats on the committee buttonholed Chairman Barney Frank, D-Mass., and told him they wouldn’t vote for the bill because of the deepening problem of unemployment in their districts.

The refusal to vote for the package, a key priority of the administration, and Treasury Secretary Timothy Geithner in particular, was portrayed as a direct rebuke of the White House’s “lack of response to the economic situation.”

“We will not be proceeding to passage today,” Frank began. “I have been meeting with members of the committee, particularly the members of the Congressional Black Caucus, who have informed me that they are troubled by what they believe is the lack of response to the economic situation that is confronting them on the part of the administration, and therefore do not feel that they could – in deference to the various constituencies that they represent – vote for passage.”

The CBC met earlier this week with Treasury Secretary Timothy Geithner and expressed dissatisfaction with the administration’s response to the unemployment situation, an aide familiar with the meeting said.

There are 10 CBC members on the Financial Services Committee. 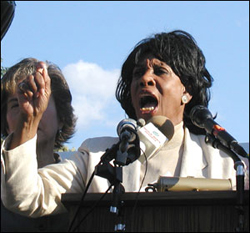 “The recession has created a unique systemic risk that threatens all parts of the African-American community, including the poor and the middle class,” said Rep. Maxine Waters, D-Calif., a subcommittee chair, in a statement after shutting down the vote. “I have always been committed to addressing that risk and will continue to do so. This is a critical issue for my constituents.”

The bill was scheduled to be considered on the House floor during the second week of December. Today’s vote was postponed until the Tuesday after the Thanksgiving break. In the meantime, the Democratic leadership is working on job-creating legislation they want to pass before Christmas.

“Nothing is lost by waiting 10 days,” said Frank. That’s assuming, he added, that he can put the bill’s coalition back together. “Obviously, if there are not the votes for the bill, it will not come up.”

Ryan Grim is the senior congressional correspondent for the Huffington Post, where this story originally appeared. He can be reached at ryan@huffingtonpost.com.