On Nov. 3, the Alameda County Board of Supervisors was scheduled to vote to award a construction contract for Highland Hospital with a taxpayer cost north of $400 million. The staff had recommended Clark Construction. Unlike other large public awards, the county obeyed the law and competitively bid this work. These two Black elected officials lead the enactment of the most important economic fairness legislation in our history.

The issue for Black contractors was how to get subcontracts that are profitable. Nate and Keith asked serious and penetrating questions of the county staff. They pressed the representative of Clark Construction Co. Clark had represented in its design-build proposal that it would make a good faith effort to award large percentages of its general contract to the various under-represented classes of small businesses.

He impressed me with his zeal. He established that he wanted a yes or no answer to his questions. He finally was able to get the county staff to admit that a good faith effort was not enforceable. If a contractor had not met his projected goals, until this day, Nov. 3, 2009, it was possible for that contractor to say, “I did my best” – without consequences. For Black and other small contractors, this was only another broken promise.

Keith Carson took this dilemma to another level. Keith asked this writer for a suggestion designed to make this situation more responsive to the need for economic parity in the Black community. I suggested and Keith, with the help of the co-counsel for this project, wrote amended specifications that made the promised goals a requirement.

He then added punitive damages for not meeting these goals. Since the general contractor agreed to the new terms, there is no basis for a lawsuit.

Serendipity was at work for us in this environment. There was the convergence of a community benefit, public officials who were dedicated to trying to meet those needs and a contractor who could have lost this contract to the second bidder, but for the contractor’s agreement to this new requirement. The closeness of the two bidders was such that the board could have chosen HP, the second contractor.

What was developed in that board meeting was a new dynamic. The leverage that public officials have just before contract award is enormous. Nate and Keith by their actions have established a method of enforcing contractor goals.

There were two large buildings in this contract. One was a medical building. The other was an office building. If the board had requested Clark to joint venture with a local minority contractor on the office building, Clark would have said yes.

The leverage that public officials have just before contract award is enormous. Nate Miley and Keith Carson by their actions have established a method of enforcing contractor goals.

This is a method that will be shared with other communities. Clark will not bring a suit because they agreed to the amended specifications. This requirement was not imposed on them. They had a choice. They could have said no.

Minorities, women and local small contractors all owe an enormous debt to Nate Miley and to Keith Carson. As a man who has spent most of his adult life seeking economic parity for Black and Brown people, I owe them too.

Joseph Debro chairs the National Fairness and Growth Campaign. He is co-founder of the National Association of Minority Contractors, a general engineering contractor and a bio-chemical engineer and can be reached at transbayd@aol.com. 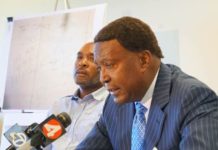