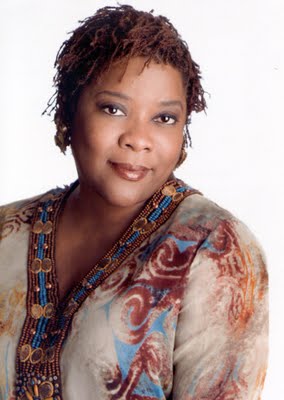 I had Loretta Devine on my radio show last week and rebroadcast part of the show this morning. She was in Atlanta on the set of a new film, “The Lottery Ticket.”

Ms. Devine grew up, she says, without a lot of money, but rich in access, it seems, to the type of investment which keeps the dividends coming in, oneself. With an undergraduate degree from the University of Houston in speech, drama and education and later a master of fine arts degree in theatre arts from Brandeis University, Ms. Devine would never go hungry.

She taught Swahili classes in Houston at a charter school while managing a stage director position in the early 1970s at the Black Arts Center, also in Houston – all this before returning for her graduate degree and then heading for the Big Apple. However, it would be 18 years before she truly hit big time, one of her biographers stated. Ms. Devine also taught English at Brandeis University and was an instructor at a summer program at Harvard University during those years. As a poet and a writer, this work must have fed her muse.

Always a singer as well as an actor, Ms. Devine is in San Francisco to take her act on the road, to develop a singing career, a first for the multi-talented lady. Her appearance at the Rrazz Room Friday through Sunday, Nov. 27-29, will mark her nightclub debut. This engagement is exciting, because not only will it be Ms. Devine’s first performance as a singer, she will be singing original music as well as work from the American songbook of love.

What a great way to start this holiday season.

The actress’s role as a single mother in “Waiting to Exhale” earned her a NAACP Image Award for Best Supporting Actress in the 1995 film based on Terri McMillan’s novel. The next year saw her work honored for a strong supporting role to Denzel Washington and Whitney Houston in “The Preacher’s Wife.”

Remember the Grammy Award winning film, “Crash”? Devine was the insurance adjuster whose bad day rained on that of the policeman whose father was dying … and the ripple effect knocked over more than dominoes. “Grey’s Anatomy” would not be the same without Devine as Adele Webber, the wife of the hospital chief, a philandering hospital chief at that, over the past four years. Usually these roles are cast as white women, but in “Grey’s Anatomy,” the first lady is a Black woman. The other woman is white (smile).

I loved her in her role in “Woman Thou Art Loosed,” based on the self-help novel by Bishop T.D. Jakes. Apparently so did others, because she received an Independent Spirit Award nomination for Best Supporting Female Actress.

In our brief interview, she spoke of how much she loved her career – the hard work that paid off and how the industry has changed because of the reality sitcoms that are an entree into the business for many actors. That’s not how she did it – getting the academic training first then trying out.

Devine spoke of how one had to be flexible and ready for roles that fit. She also said that she supported the independent directors too, which is how one sees her in smaller budget films like the Maurice Jamal’s “Dirty Laundry” and the lovely “This Christmas,” directed by Preston A. Whitmore II, which had a theatrical run. Both films were released in 2007.

A friend told me this week as we discussed the upcoming show that she’d seen Devine as La La in George C. Wolfe’s “The Colored Museum” with Vickilyn Reynolds. Both went on to play sisters in the short-lived TV series, “Sugar and Spice.” I think Ms. Reynolds was in a production of “Old Settler” here at Theatre Works.

Loretta Devine, Broadway actor and singer, will appear at the Rrazz Room in the Hotel Nikko, 222 Mason St., San Francisco, for three performances Thanksgiving weekend, Nov. 27-29. Shows are at 8 p.m. with the Sunday show at 7 p.m. Tickets are $40 and can be purchased at www.therrazzroom.com or directly through ticketweb.com or at (866) 468-3399.

Learn more about this extraordinary woman by reading her online biography.