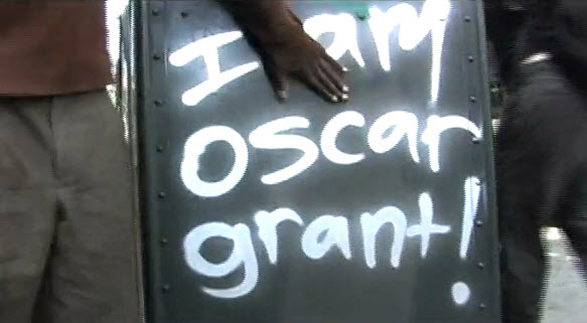 “Operation Small Axe” takes a raw and unflinching look at life under police terrorism in Oakland, drawing parallels with the struggles against oppression in Palestine and South Africa. Through the stories of Oscar Grant and Lovelle Mixon, the film focuses on the occupation of Oakland’s communities of color by militarized and racist police forces.

Oscar Grant was shot in the back and killed by Bay Area Rapid Transit police officer Johannes Mehserle on Jan. 1 of this year. On March 21, Lovelle Mixon was killed by Oakland police after having allegedly shot five OPD officers, killing four.

The film, now debuting to rave reviews around the Bay Area, is directed and produced by 393 Films’ Adimu Madyun, edited by Angela N. Carroll, with camera work by Hooker Boy, Angela N. Carroll, Siraj Fowler and Adimu Madyun. Prisoners of Conscience Committee Minister of Information JR is the executive producer.

Watch this “Operation Small Axe” trailer for a taste of the bitter but little known war waged daily on the streets of Black and Brown Oakland by the police against the people. Now that the judge has ordered the murder trial moved out of Oakland of the cop who killed Oscar Grant in cold blood two hours into the 2009 New Year on a BART platform in front of hundreds of horrified passengers, this film will inform all Californians why justice for Oscar Grant is imperative.

Arrange for “Operation Small Axe” to be shown in your community by contacting Minister of Information JR at blockreportradio@gmail.com or calling the SF Bay View, where JR is associate editor, at (415) 671-0789.