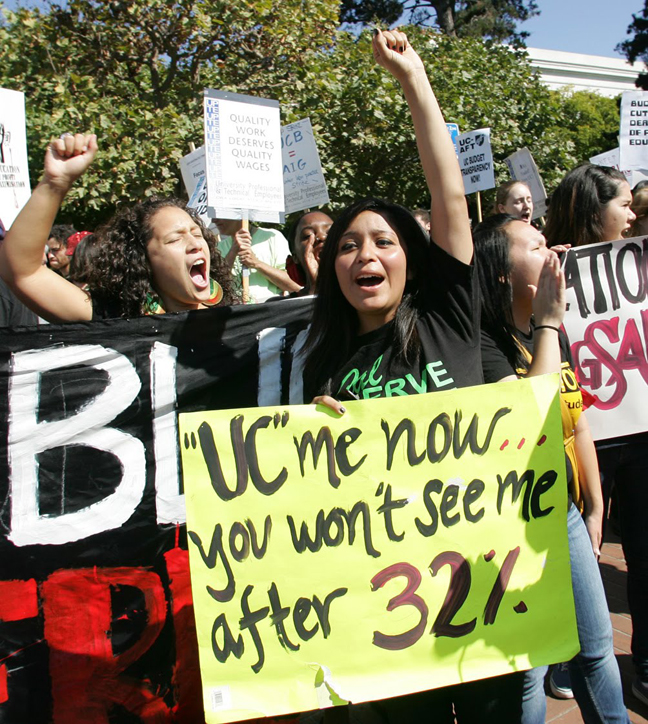 Police are arresting and attacking student protesters on University of California (UC) campuses again. “Why did he beat me? I wasn’t doing anything,” screamed a young Cal Berkeley women student over KPFA radio on Friday evening, Nov. 20. Students are protesting the 32 percent increase in tuition imposed by the UC regents in a time of severe state deficits. The Board of Regents claims that they have no choice. Students will now have to pay over $10,000 in tuition annually for a public university education that was free only a few decades ago.

The corporate media spins the tuition protests as if we are all suffering during the recession. For example, the San Diego Union Tribune writes Nov. 20, “These students need a course in Reality 101. And the reality is that there is virtually no segment of American society that is not straining with the economic recession. With UC facing a $535 million budget gap due to state cuts, the regents have to confront reality and make tough choices. So should students.”

Yet, the reality is something quite different. Our current budget crisis in California and the rest of the country has been artificially created by cutting taxes on the wealthiest people and corporations. The corporate elites in the U.S., the top 1 percent who own close to half the wealth, are the beneficiaries of massive tax cuts over the past few decades. At the same time working people are paying more through increased sales and use taxes and higher public college tuition. 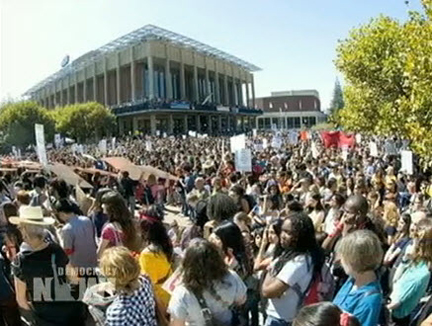 The wealthy hide their money abroad. Rachel Keeler with Dollars & Sense reports that over the years, trillions of dollars in both corporate profits and personal wealth have migrated offshore in search of rock-bottom tax rates and the comfort of no questions asked. Offshore banks now harbor an estimated $11.5 trillion in individual wealth alone, and were a significant contributing factor to the international economic downturn in 2008.

According to the California Budget Project, tax cuts enacted in California since 1993 cost the state $11.3 billion annually. Had the state continued taxing corporations and the wealthy at rates equal to those 15 years ago, there would not be a budget crisis in California. Even though a budget deficit was evident last year, California income tax laws were changed in February of 2009 to provide corporations with even greater tax savings — equal to over $2 billion per year. California is similar to the rest of the country, where the wealthy and corporate elites enjoy economic protection through increased costs to working people. 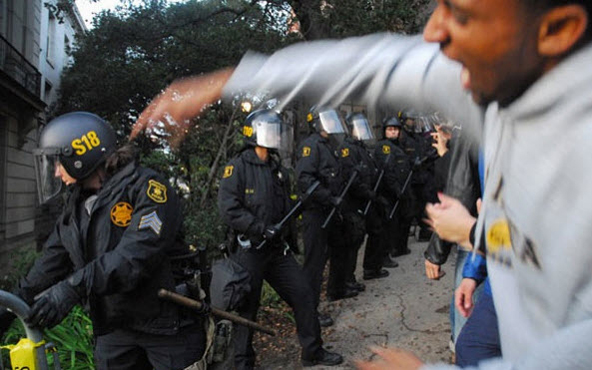 Higher education has been cut in 28 states in the 2009-10 school year and further, even more drastic cuts are likely in the years ahead. The California State University (CSU) system is planning to reduce enrollments by 40,000 students in the fall of 2010. The CSU trustees have imposed steep tuition hikes and forced faculty and staff to take non-paid furlough days equal to 10 percent of salaries.

The students who are protesting tuition increases know they are being ripped off. They know that we are bailing out the rich with hundreds of billions dollars for Wall Street and massive budget cuts for the rest of us. The corporate media doesn’t explain to over-taxed working families how they are paying more while the rich sock it away.

We need higher taxes on the corporations and the top 1 percent, combined with free public college education and tax breaks for working families. 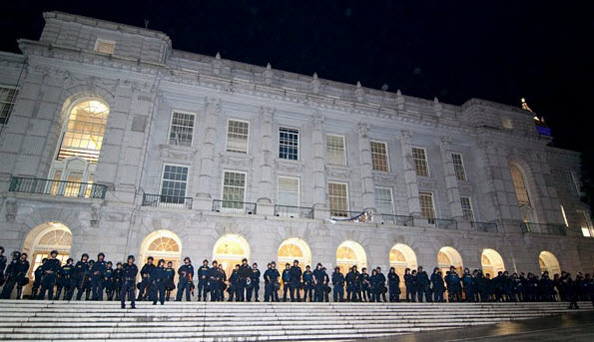 The current economic crisis is a shock and awe process designed to undermine low-cost higher education, force labor concessions from working people and protect the wealthy. We need higher taxes on the corporations and the top 1 percent, combined with free public college education and tax breaks for working families. And, we must have a media that tells us the truth about inequality and wealth. A true economic stimulus increases spending from the bottom up, not the top down.

Peter Phillips is a professor of sociology at Sonoma State University, president of Media Freedom Foundation and recent past director of Project Censored. He can be reached at Peter.phillips@sonoma.edu. This story first appeared at The Daily Censored. 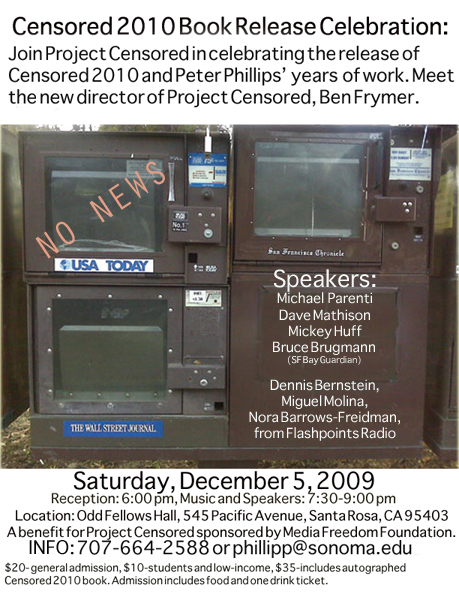 Project Censored and Media Freedom Foundation will host a celebration party honoring the release of the “Censored 2010” yearbook Saturday, Dec., 5, starting at 6 p.m. at the Odd Fellows Hall, 535 Pacific Ave., Santa Rosa. Tickets at the door are $20 for general admission, $10 for low-income people and students and $35 includes an autographed copy of “Censored 2010.”

Project Censored, in its 34th year of operations at Sonoma State University, is where over 200 students and faculty research and publish an annual list of the most important censored news stories of the year. The “Censored 2010” yearbook included research from nine other colleges and universities through out the United States.

Michael-David Vineyards, Lagunitas Brewing and Oliver’s Market have provided food and drink for the evening.