“Just for you a word or two your image it keeps dancing through/ my mind at times I think about the changes you’ve been going through” – Poem for Eleanor Spikes, “Phoenix Free,” by Ahimsa Porter Sumchai 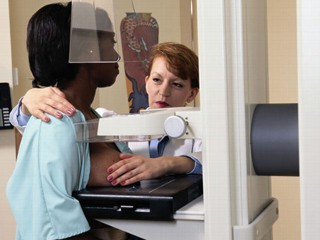 This breast cancer issue has hit me in every direction for as long as I can remember. I was a first year surgical intern at UCSF in 1982 when my friend Eleanor Spikes, an associate of Aileen Clarke Hernandez, was diagnosed with breast cancer and died within a year. I remember being reduced to tears at a time when stoicism was expected of me as a surgeon in training.

I lost two more friends from breast cancer with little more than a year between diagnosis and death: Gloria Davis and Alicia Pierce. All three of my friends were African American women.

Therein lies the blazing controversy ignited by the recommendations of the United States Preventative Services Task Force (USPSTF) on mammograms released last month. Those recommendations have been met with screaming opposition from the Department of Health and Human Services, the White House, the American Cancer Society and the American College of Obstetrician Gynecologists.

Additionally, informed Black physicians, breast cancer survivors and activists like myself are aware that African American women were largely excluded from the samples driving the USPSTF’s statistical conclusions and that the task force was specifically asked to consider cost of breast screenings and diagnostic studies.

The known health disparities that contribute to premature death from breast cancer in African American women have galvanized righteous opposition to the USPSTF mammogram recommendations. In the past, these recommendations have influenced decision making by physician groups and the health care insurers who pay for preventative studies.

Up until this year, in the face of massive efforts to reform the nation’s health care system, the USPSTF recommended that women aged 40 with no increased risk of breast cancer undergo mammography every one to two years and that women aged 50 obtain a screening mammogram every year.

In a move that critics call a prelude to health care rationing driven by the insurance industry and cost containment, the USPSTF now recommends that women under 40 at no increased risk of breast cancer not undergo screening mammography and that women aged 50 to 74 be screened every two years.

Adding to the “pile on” of the controversy are the opinions of a bevy of predominantly male physician newscasters who have used the bully pulpit of their syndicated television shows to broadcast information often clouded by statistics and frank sexism.

I take strong exception with the statistical wizardry evident in defense of the USPSTF by Mehmet Oz, M.D., and Michael Roizen, M.D., who offer calculator boggling lip service to its recommendations with the following analysis:

“Screening younger women hasn’t dramatically increased the number of lives saved. While mammograms have reduced the risk of breast cancer deaths overall by about 15 percent, that risk is so low in women under age 50 that the screenings don’t save significantly more lives.

“Research cited by the task force estimates that to spare the life of one woman in her 40s, 1,904 women would need one mammogram every year for 10 years. In contrast, one life is saved for every 1,339 women in their 50s who get 10 years worth of screenings and for every 377 women in their 60s.”

Well, let me say publicly to the good doctors Oz and Roizen that I have breasts and when it comes to statistics, I don’t play! Let me rip into their arguments. First, there is strong statistical evidence that screening women beginning at age 40 has reduced overall mortality from breast cancer by up to 40 percent!

Secondly, the easiest way to play statistical games is to use a small sample size and to deliberately exclude high risk populations! There are millions of women in the U.S. population. Citing risks in the context of every 1,000 women is an inadequate reflection of the population at risk!

Excluding African American women in representative numbers in the task force statistical analysis is not only a blatant expression of racism in science, it lowers the overall risks calculated for a small, unrepresentative sample!

African American women have a higher mortality for breast cancer, a higher incidence of triple negative breast cancer that is more aggressive, appears at a younger age and is unresponsive to conventional therapies. To enact the USPSTF recommendations for African American women and other women in high risk groups – i.e., Askenazi Jews, women with BRAC markers and hereditary risk factors – is to widen a health disparity that has resulted in the deaths of thousands of women each year in this country prior to the gains made by screening mammograms.

Now in sympathy with the USPSTF recommendations, let me offer my tear jerking personal story. I sympathize with the cost benefit analysis the task force applied to its recommendations because I paid $500 for my screening mammogram in June of this year. It came right out of my checking account … not out of the wallet of some overpaid executive at Blue Cross. I have a pre-existing condition from a work related spinal injury that is covered by Workers Comp. Despite that, I am denied health insurance and pay out of pocket for most of my medical and dental services.

I underwent screening mammography in my late 40s at UCSF and the mammogram showed what appeared to be benign cysts. Because it was my first screening and I was considered at higher risk as an African American women – I had to complete a survey prior to the exam – I was referred for a diagnostic mammogram at UCSF Mt. Zion. The diagnostic mammogram also detected cysts but, just to be sure, the radiologist ordered a breast ultrasound. By the time the ultrasound had been scheduled, the cysts could no longer be located. Cysts fluctuate during a woman’s menstrual cycle and can disappear entirely.

The moral of the story is that I was in the radiology suite for two hours, was embarrassingly late for work, received a bill for over $1,500 and when I applied for Blue Cross health insurance, I was again denied coverage. I had an abnormal mammogram! I was offered a high risk policy for $800 a month with reduced benefits. I would have to pay for my own mammograms.

The false positive rate for mammograms among women aged 40 is about 10 percent and I agree with the task force that receiving that form letter from UCSF Radiology documenting an abnormality on my screening mammogram had me thinking about formulating a will for the first time in my life.

The bottom line: Every woman should have a screening mammogram at age 40!