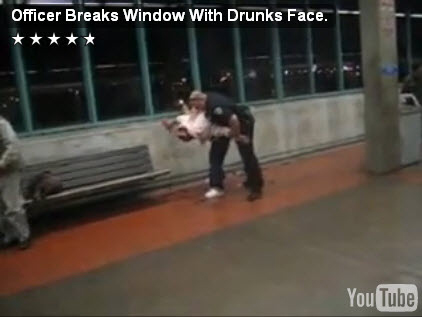 KCBS calls it “Another Viral BART Police Confrontation,” referring to the video of a BART officer shooting passenger Oscar Grant in the back as he lay face down on a BART platform at 2 a.m. New Year’s Day that has horrified millions around the world. The new video, shot Saturday evening, shows another BART officer assaulting a passenger almost as viciously.

Though removed tonight from YouTube and replaced a few hours later, the video, originally titled “BART cop breaks window w/drunk guy’s face,” can be seen below and on CNN, which is showing it repeatedly, and on TV stations and websites in the Bay Area and Los Angeles, where Johannes Mehserle will be tried in 2010 for the murder of Oscar Grant.

Mehserle is the first police officer to stand trial for murder in California history. The venue for his trial was recently moved from Oakland to Los Angeles after his lawyer argued that police brutality is too rampant in Oakland for Mehserle to get a fair trial there.

Extreme brutality is depicted on the new video. The San Francisco Examiner reports: “A BART police officer was shown in an online video smashing the head of a belligerent passenger through a thick glass window Saturday at West Oakland station.

“After the video was posted on YouTube, the transit agency held a press conference to announce that the passenger had been charged with felonies and a misdemeanor.

“The arresting officer and the passenger were both injured during the incident, police said.

“In the video, the passenger, identified as Michael Gibson, 37, of San Leandro, can be seen acting belligerently before being hauled off the train by a BART police officer. 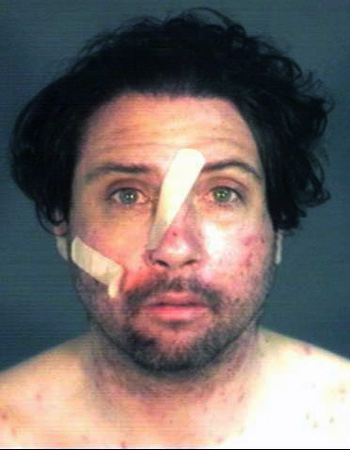 “Gibson was removed from the train at 5:40 p.m. after four people reported him to police for being drunk, trying to start fights with other passengers and making racial slurs, BART Police Patrol Commander Daniel Hartwig told reporters.

“The officer can be seen in the video pushing Gibson across the platform from the train to a wall before shoving him strongly into a glass window, which shattered under the impact.

“The glass was one-fourth of an inch thick and fell 30 feet onto newspaper boxes, according to Hartwig. …

“Hartwig said the incident is being investigated and he acknowledged that the video played a role in BART’s decision to hold a press conference.

“‘We are keenly aware of what YouTube brings to the public,’ Hartwig said.”

A BART press release, headlined “BART Police Officer Injured Arresting Unruly Rider at West Oakland Station,” attempts to exonerate the unnamed officer, in case anyone should suspect him of wrongdoing: “The officer removed the suspect from the train and led him to the platform wall in an attempt to place him under arrest. During that attempt, the heavy-duty glass portion of the wall was broken and showered down on the officer and the suspect.”

“At this time, we don’t know what broke the glass,” reported the San Francisco Chronicle, quoting BART Cmdr. Hartwig.

Race was an obvious factor when Johannes Mehserle, who is white, killed Oscar Grant, a young Black man. The new incident has less obvious racial implications. “BART officials said Sunday that both the officer and Gibson are white. Gibson’s father said his son is black but is light-skinned and often mistakenly identified as white.” The Chronicle noted that the officer “stands 6 feet 1 and weighs 200 pounds” while Gibson is “listed on jail records as being 5 feet 9 and 155 pounds.”

Gibson is also disabled, his father told the Chronicle, which reported: “Gibson’s family said he had struggled with mental illness and substance abuse, and had been in previous run-ins with police.

“‘We’ve been trying to get help for him,’ said his father, Joseph Gibson of Hayward. ‘He’s got mental problems and should have been put away a long time ago. He’s been in and out of so much stuff lately.’

“But he added, ‘This cop didn’t even say anything. He just grabbed him and rolled him into the window.’”

On today’s KPFA Morning Show, famed defense attorney John Burris, who is representing the family of Oscar Grant and will now take on the case of Michael Gibson as well, said: “It was shocking to see, because the person [Gibson] appeared to be emotionally impaired, either intoxicated or having mental problems. The officer did not appear in any way to assess the situation to see if he could de-escalate this, to calm the situation. In fact, he was yelling at this person and then he went immediately and grabbed this person by the throat and then manhandled the person until he threw him up against this glass wall.”

Asked by host Aimee Allison about the legal basis for charging Gibson with felonies – resisting arrest and assaulting an officer, according to yesterday’s Chronicle – Burris, who will both defend Gibson against the criminal charges and file a civil suit on his behalf, responded: “This is the most outrageous aspect of this whole case! This is the part that is most troubling about police work. The police officer will engage in inappropriate conduct, hurt someone, then charge the person for them having hurt that person.

“There is no way this person [Gibson] should be charged with felony charges. If anybody should be charged with a crime, it ought to be the officer. It wasn’t the person who was physically aggressive; it was the officer who was physically aggressive. The officer was the one who was choking the person and grabbing him and slinging him about and ultimately throwing him against the plate window.

“To the extent that the officer got hurt as a consequence, it’s the officer’s fault, because the man didn’t throw himself against the plate window. The officer did this, so how can it be that this person who was the victim here, he then gets charged with a crime?

“I’m going to see this person. I am shocked and outraged. I would think that the district attorney would have better sense than to charge this person with a felony.

“This is a flat cover-up for the officer’s misconduct. And the BART Police Department ought to step in and say, ‘No, this is not a felony. This was in fact caused by our officer’s own misconduct and stand up and man up to what they did.”

“Video phones are everywhere,” Burris added, “so officers should understand that when you engage in conduct that’s inappropriate, it’s very likely that it’s going to be captured in some way and so we can all then see. Because if there’s no video camera, it may be that this officer can get away with this statement about what happened. But with a video camera there, you can clearly see that he was the aggressive person.”

Referring to two major – and damning – reports BART commissioned, one by the law firm Meyers Nave and the other by the National Organization of Black Law Enforcement Executives (NOBLE), Burris said, “We hope that all the money and all the effort that has been spent” on investigating the murder of Oscar Grant and examining the policies and operations of BART police “will not go for naught and that BART will step up to the plate here and acknowledge that the conduct here was wrong and not try to stand behind it and somehow suggest that it was proper. Because to do that, it sends a message to the public that all that we [BART] said about Oscar Grant and how wrong it was, we really didn’t believe that.”

This video was posted to YouTube late Sunday night by “mmmikeey” after the first one, posted by “marginwalkerr,” was taken down, reportedly by the author. The footage appears to be from the same camera.