by Abiodun of the Last Poets 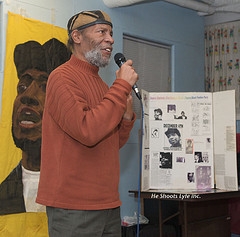 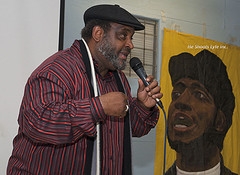 And the people came out
The Native Americans were there
The Puerto Ricans were there
The radical white groups were there
The Move organization from Philly was there
Survivors of the government’s Katrina were there
Kathleen Cleaver was there
And Black Panthers old and young
From everywhere
In America
It was the call of the wild
And it was heard loud and clear
The revolution cannot be stopped
It was as it should be
The torch is passed
The seeds have grown
The truth has come out
The beast must be stopped
The beast on the outside
And the beast within
That causes us to eat the entrails
Of our demise
And feast on the pain
And swollen tears
Of our misfortunes
Then a warrior appears
A Black man strapped with an arsenal
Of Black people
Enthralled by the Panther passion
You are your mother’s child
You are your father’s son
And you wear it well
It shines on your face
And flows like the Mississippi
From your mouth
Even when it’s muddy
Its still fresh water
Long live Chairman Fred Jr.
Long live Queen Mother Akua
Who could feel the bullets
Killing her man
As she lay asleep beside him
Those bullets were more fuel
For the revolution
For the liberation of our minds bodies and souls
The drums have never stopped beating 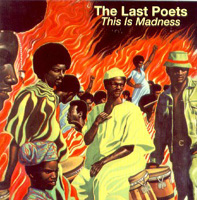 The Last Poets take their name from a poem by the South African revolutionary poet Keorapetse Kgositsile, who believed he was in the last era of poetry before guns would take over. Formed on May 19, 1968, Malcolm X’ birthday, at Marcus Garvey Park in East Harlem, they were soon listed as a threat to the internal security of the U.S. by the FBI’s COINTELPRO. Commenting on the Last Poets’ revolutionary influence on hip-hop, critic Jason Ankeny writes, “With their politically charged raps, taut rhythms and dedication to raising African-American consciousness, the Last Poets almost single-handedly laid the groundwork for the emergence of hip-hop. The group arose out of the prison experiences of Jalal Mansur Nuriddin, a U.S. Army paratrooper who chose jail as an alternative to fighting in Vietnam; while incarcerated, he converted to Islam, learned to ‘spiel’ (an early form of rapping), and befriended fellow inmates Umar Bin Hassan and Abiodun Oyewole.” Learn more on Wikipedia and at The Last Poets. This poem describes International Revolutionary Day on Dec. 4, 2009, the 40th commemoration of the assassination of Black Panther Party Illinois Chapter Chairman Fred Hampton and Defense Captain Mark Clark in Chicago.