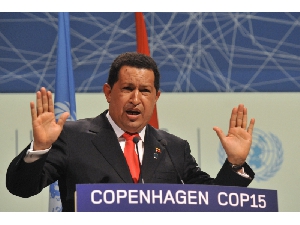 During his speech to the 15th United Nations Climate Change Summit in Copenhagen, Denmark, Venezuelan President Hugo Chavez slammed the “lack of political will” of the most powerful nations to take serious action to avert climate change and called for systemic change to save the planet.

Chavez, who received a standing ovation for his speech, said the process in Copenhagen is “not democratic; it is not inclusive.” In particular, he criticized an attempt by rich countries to overturn the Kyoto Protocol. Doing so would eliminate differentiation between the obligations of rich and poor countries, treating countries from the Global North and South as equally responsible for climate change.

The Venezuelan president also applauded the initiative of the protesters outside the summit who were calling for serious measures to stop catastrophic climate change.

“There are many people outside … I’ve read in the news that there were some arrests, some intense protests there in the streets of Copenhagen, and I salute all those people out there, the majority of them youth … They are young people concerned for the world’s future,” he said.

Another notable slogan is, “If the climate were a bank, they would have bailed it out already,” Chavez said during his speech. “It’s true; the rich governments have saved the capitalist banks,” he said, but they lack “the political will” to make the necessary reductions to greenhouse emissions.

“One could say there is a specter at Copenhagen, to paraphrase Karl Marx … almost no one wants to mention it: the specter of capitalism,” he declared.

“If the climate were a bank, they would have bailed it out already,” Chavez said, quoting a protestors’ slogan.

History requires all people to struggle against capitalism and, if we don’t, life on the planet “will disappear,” the Venezuelan president argued.

“Do the rich think they can go to another planet when they’ve destroyed this one?” he asked as he recommended a book by Hervé Kampf, “How the Rich are Destroying the Planet.”

“Climate change is undoubtedly the most devastating environmental problem of this century. Floods, droughts, severe storms, hurricanes, melting ice caps, rise in average sea levels, ocean acidification and heat waves – all of that sharpens the impact of global crisis besetting us,” he continued.

Human activity is exceeding the limits of sustainability and endangering life on the planet, but the impacts of climate change are also being felt disproportionately by the world’s poor, Chavez explained. 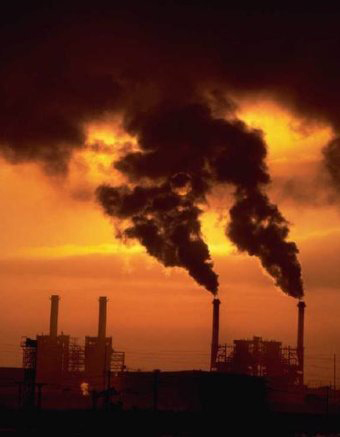 Using this analysis, he argued that it was not feasible to call countries such as the U.S. and China to sit at the summit on an equal footing, insisting that the same obligations cannot be imposed on both nations.

The behind-the-scenes negotiations at the summit have been marked by sharp disputes between the U.S. and China and between rich and poor nations. Poor countries have criticized rich countries for attempting to set inadequate emissions targets for industrialized countries and for pledging insufficient funding for poor countries to alleviate the impacts of climate change.

According to various reports, poor nations argue that rich countries should reduce their greenhouse gas emissions by 40 percent below 1990 levels by 2020. The European Union has pledged a 20 percent reduction. The U.S. however, has only offered only a 3-4 percent cut.

Outside in the streets of Copenhagen, mass demonstrations calling for “climate justice” have been repressed by police using pepper spray and batons. More than 1,000 people have been arrested.

Chavez called for the summit to change direction. “We cannot continue like this. Let’s change course, but without cynicism, without lies, without double agendas, no documents out of the blue, with the truth out in the open,” he said.

Chavez: Capitalism will destroy the planet

‘There is no turning back’: We salute a great freedom fighter – Comandante Hugo Chavez Frias

Reflections and dialogue with the Global South