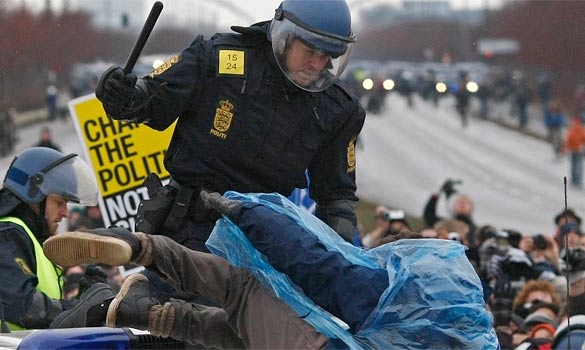 Again, I write to you from snow-covered Denmark and the United Nations climate change meetings and related events. Over the past couple of weeks, I have come up with a number of names for this place, such as “COLDpenhagen” and “SNOWpenhagen.” Entities like the capitalist giant Coca-Cola Zero – how fitting for this non-nutritious and addictive narcotic which costs so many of our precious resources to produce and distribute – have advertised the proceedings as “HOPEnhagen.”

Well, my friends, I have finally settled on an appropriate name for this place. And it requires no change in the spelling. I now refer to this capital city as COPenhagen. You know, as in police.

As expressed in previous reports, this place is swarming with cops. Some officials have informed us that more than half of Denmark’s 10,500 police officers were assigned to the Bella Center alone, site of the U.N. gathering. They have been given the authority by the repressive Danish government to arrest and detain any person, at any time, and without any cause. Talk about “democracy.”

They have rolled up into our independent, non-government Klimaforum09 site to intimidate and harass participants. During demonstrations this week, I personally witnessed and voiced my objections to these cowards of the state violently beating the bodies of peaceful protesters, including fragile elder women, with their hard li’l baseball bats (batons).

Even though I displayed my San Francisco Bay View newspaper and U.N.-credentialed media passes, I was angrily told to leave the area, have my camera broken or be arrested. Being a brother who has had to, unfortunately, physically engage with police officers on a number of occasions, and from one who has been knocked in the head a few times, I determined it was not wise to escalate this confrontation.

And, since I’m a person who also practices righteous self-defense, these forces might have broken something else even more valuable to me, and vice versa. Over the decades, I have learned when best and how to, selectively, pick my fights … and when to walk away with dignity when you’re completely out-gunned. I’m just keepin’ it real, y’all! Asé. Amen.

In a previous report titled “The spirits of Patrice Lumumba and Maurice Bishop live!” I spoke to the powerful stances being exhibited by key representatives of the G77 group of exploited nations and former colonies and the AOSIS, or Alliance of Small Island States, here in Copenhagen. In particular, Brother Ambassador Lumumba Di-Aping of Sudan in Afrika and Sister Ambassador Dessima Williams of Grenada in the Caribbean have been exhibiting exceptional leadership and courage in the face of the menacing imperialist political, military and corporate abusers. 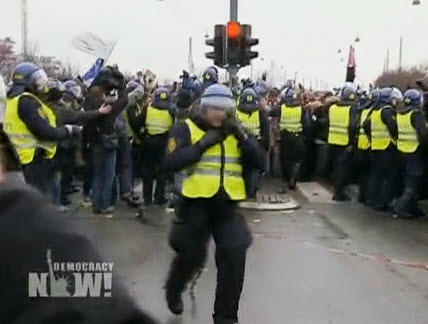 It is in that same revolutionary spirit that possibly the most profound voice in world politics has now arrived. Hell no, it’s not President Barack Obama! It’s not even President Hugo Chavez of Venezuela, who I support, who is here offering his usual sharp critiques of the imperialist powers like the U.S. and advancing significant proposals to unite the many victim nations.

This leader comes without the “flash” or the “machismo” style, so typical of many male – and now female – officials in our societies. This voice has, instead, a much quieter tone. It might even appear, on the surface, to lack passion. Yet the analysis offered by this seemingly gentle leader is deeply reflective and insightful. And this leader’s vision is in line with what I and many others have been advocating for over the years – and receiving very little traction on, I might add, though we continue on the path.

He is the leader and president of Bolivia, Brother Evo Morales. Brother President Morales has, in fact, gone even further than our revolutionary relatives in the G77, AOSIS and ALBA (Bolivarian Alternatives of the Americas) groupings with which the nation of Bolivia is aligned.

In his opening speech before the assembly, Brother President Morales offered the gathering a significant “Declaration of Rights for Mother Nature.” This is in the grand tradition of the U.N.’s “Universal Declaration on Human Rights” and similar affirmations for women, children, Indigenous people etc.

This proposal would aim to protect the rights of not only every person on earth, but planetary rights for the water, the land, the soil, the forests, the creatures etc. It would make it a criminal act with serious consequences to deliberately violate or pollute nature.

Faced with mounting issues like melting glaciers and destruction of the rainforests on his home continent, President Morales has also called for very necessary measures to lower our world’s temperatures by even more than the recent warnings from most scientists and even our colleagues in G77, Africa Group and AOSIS. “One degree (Centigrade) rise is too much!” says Morales.

While some of you may find this hard to stomach, based on your current affliction to “barackracy,” Brother President Morales’ assessment of the U.S. president was especially revealing. In a later interview with Sister Amy Goodman, host of Pacifica Radio’s Democracy Now! he boldly stated what I have been attacked for in the U.S. and here in Europe: “The only thing that has changed in the U.S. presidency is the color of the skin … Obama is much worse than Bush in many ways.” I concur.

He goes on to call a donkey a donkey and an elephant an elephant, saying if you send troops to kill and occupy other lands like Iraq and Afghanistan, then that is “spending trillions to export state terrorism.” As for climate justice and the Reparations needed to adequately address it, President Morales soundly criticizes the “Northern states” (U.S., Europe, Canada, Japan etc.), who are primarily responsible for causing the crimes of climate change, for the paltry amounts they are now offering to clean up and repair this dangerous mess.

This powerful leader of Indigenous Aymara background then stated, very simply, that the problems of climate change, environmental destruction and human suffering and death “are a direct result of the capitalist system … and capitalism needs to be overthrown!” Nuff said! Brother President Evo Morales speaks for me! (See the entire interview posted below.)

Finally, Asante Sana (many thanks in Swahili) to the now 63 people who have written to tell us they either called or emailed President Obama in response to our Reparations appeal on this past Tuesday. Friends like Sister Sharon M. of the Challenging White Supremacy Workshop tell us, “I have never contacted a President before … but did so because of your relentless prodding.” And, a Chi-Light (Chicagoan) Sister Bisola M. says, “I’m not sure it will do any good, my Brother. But, let’s keep trying anyway.” Possibly, there are more of you we haven’t heard from yet.

And, while President Obama says a tentative nonbinding deal has been reached, negotiators remain at work and you should still make the call or send the email to let his administration know that you support Reparations for past and continuing crimes against humanity and nature. The phone numbers again are (202) 456-1111 or (202) 456-1414, fax is (202) 456-2461 and email can be sent at www.whitehouse.gov/contact; cc Vice President Joe Biden at vice.president@whitehouse.gov.

You should still make the call or send the email to let the Obama administration know that you support Reparations for past and continuing crimes against humanity and nature.

Baba Jahahara is a veteran justice, community, labor and environmental organizer, writer and musician. He is a past national co-chairperson of the National Coalition of Blacks for Reparations in America (N’COBRA) and author of the new book, “Many Paths to Kugichagulia” and the recently-released CD titled “Elevate: Rise Up You Mighty Afrikan People!” Reach Baba Jahahara at support@wedemandreparations.com or FONAMI, P.O. Box 10963, Oakland, CA 94610.

Bolivian President Evo Morales on climate debt, capitalism, why he wants a tribunal for climate justice and more

Bolivian President Evo Morales joins Democracy Now! in Copenhagen. “Policies of unlimited industrialization are what destroy the environment,” Morales said. “And that irrational industrialization is capitalism.”