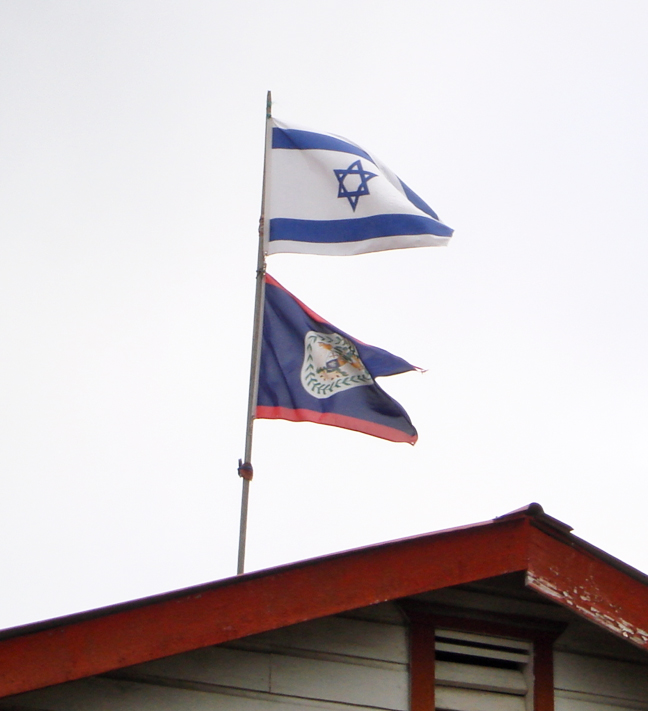 Cayo, Belize – Knowing what we do about Israel, we find it insulting to see the Israeli flag flying above the Belize flag. This is offensive to Belize and Belizeans; in Israel it is illegal for Palestinians to fly their flag. We seriously doubt that anyone could fly any flag above the Israeli flag in Israel.

It seems an appropriate time to write this article during the season of the celebration of the birth of Jesus, for those who are Christians.

There are Evangelicals being led by a right wing racist church called Christians United for Israel (CUFI) led by Pastor John Hagee from Texas. Of course, he has every right to his opinion and it is understandable that he does so, since Israel has him or his church on their payroll. They even furnish him with his own private jet to travel and lobby for Israeli causes in the U.S.

It seems contradictory for any Christian to promote Zionism. They have taken Palestinian land from both Muslims and Christians. They forced the closing of one of the most holy Christian places of worship – it was the first time in 500 years its doors were closed.

The Hassidics, who are the experts of the “Torah,” denounced Israel for calling itself the Promised Land. They believe that only the Messiah can lead them to the Promised Land, and the Zionists are not messiahs but are false prophets.

When we speak of “Zionism,” we do not mean Judaism. A major reason for our anti-Zionism is that the principal element of Zionism is racism. Zionists believe that Jews are superior to all others, in particular to the Palestinians who lived and live on the land the Zionists stole from them in 1948. Between 1967 and 1973, Israel doubled its territory by its illegal occupation of the West Bank, Gaza and parts of “neighboring” countries – the lands of others.

Zionists reject the idea of a secular (non-religious) state based on equality for all citizens. They maintain that Jews have special rights. Israeli law grants automatic citizenship to any Jew, regardless of where they were born, as long as they produce proof that their mother was a Jew.

Christians and Muslims born in Palestine are not considered full citizens of Israel. But if you are from a European background (white), you are a little more equal. Let’s not forget that Israel had worked with the apartheid government of South Africa, testing nuclear weapons.

This dialog could go on, but we believe we have said enough to give you a basic understanding.

Our anti-Zionist position goes back decades. In June 1967, Candy was in Cairo, Egypt, during the “Six Day War” on her way to a teaching position in Tanzania. She experienced first hand what happened.

The Western press said the Egyptians started the war when, in fact, it was Israel, in an early morning surprise bombing attack. The Western press said civilian populations were not targeted, but Candy remembers a large man running towards her and pushing her against a wall just as an Israeli plane flew over spraying bullets at civilians in the downtown area. Had it not been for the stranger’s quick thinking, she might have been killed that day. The Israelis went so far as to attack a U.S. flagship, the USS Liberty, killing 34 sailors and wounding 131.

In the late 1970s, when Jimmy Carter refused military aid to Guatemala for human rights violations, the Israelis stepped in. They provided arms to Guatemala and helped train the military and those that became known as the “death squads.” Israel supported the Salvadoran right wing party and its “death squads” in the war against the people. In 1980, when Israel declared Jerusalem as its capital, it was no surprise that Guatemala and El Salvador were among the first to support them.

Jamaican-British filmmaker Ishmahil Blagrove was on the Spirit of Humanity, along with Cynthia McKinney, the former U.S. Congresswoman from Georgia. They were taking humanitarian aid to Gaza. On June 29, they along with 19 others were abducted by the Israeli Navy in international waters and held in Israel’s Ramle Prison for a week.

Blagrove told Sky News via a cell phone provided by British consular services, “Africans, like Palestinians, are being persecuted by the Israeli government and the world needs to know.” He says the Israeli prison population is 90 percent Black. [See sfbayview.com’s “‘My hell in an Israeli jail’: 90% of Israeli prisoners are Black.”]

Former San Franciscans George and Candy Gonzalez live in Belize, where they are leaders in movements for human rights and environmental justice and many of the other worthy causes they championed in the U.S. They can be reached at geocanbz@gmail.com. The Bay View salutes and thanks them for their long and very strong support over the years. 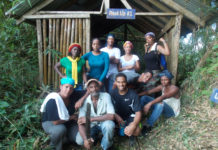