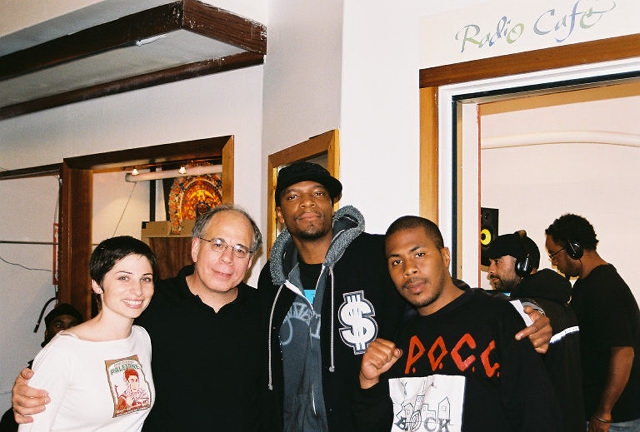 Over the last few years, KPFA radio station has been making a lot of weird moves that lose listenership rather than gain it. In 2006, Lemlem Rijio, the general manager, tried to sideline the Black Panther Party 40th anniversary celebration from playing on the air. She then went on to derecognize the unpaid staff organization, which speaks for the staff that runs over 75 percent of the programming.

Around this time Youth Radio, which is the only hands-on radio training program for teenagers in the Bay that I know of, was kicked off of the air because one of the youth who was being trained allowed for some profanity to go out on the airwaves. Instead of working it out with the youngster, management cancelled the show, which had been running for over a decade and has brought talent to KPFA over the years like myself, Hard Knock’s Anita Johnson and Dj Mike Biggz, Nora Barrows Friedman from Flashpoints, Dev Ross from the engineering department, and that’s just to name a few.

To add to their diabolical credit, Lemlem and her former interim program director Sasha Lilley dismantled the Program Council, so there is no way but through management to get anything played on KPFA.

Also around this time, former Black KPFA programmer Nadra Foster was brutally beat up by police in the station and arrested, after another member of Lemlem Rijio’s management team, Lois Withers, made the bogus claim that Nadra was trespassing. Lemlem and the rest of management and a few other cronies rushed to cover it up and do damage control in the media, at staff meetings and on the airwaves.

And I also must note that in 2009, KPFA still does not have a Black public affairs show that speaks to the issues and politics in the Black community locally, regionally or nationally, although the station is located only blocks from where Huey P. Newton and Bobby Seale created the Black Panther Party 43 years prior to me writing this article.

Now Lemlem Rijio, who is an African immigrant, is back at it again. Pacifica, the parent company to KPFA, demanded its five stations make budget cuts. At the last minute, Lemlem imposed the burden of these cuts on her political enemies in the station, which can be summed up best as the crews of Hard Knock Radio, Flashpoints and Full Circle.

These three shows have been vocal about the police beating that happened inside KPFA last year, as well as about a number of the other issues that I have mentioned previously in this article. Although KPFA is openly hiring new people and creating new shows, Frank Sterling of Full Circle, Mike Biggz of Hard Knock and Eric Klein of Flashpoints were laid off, while Nora of Flashpoints went from full time to part time. More cuts are expected.

I wanted to interview one of these individuals so that our readers would have the inside scoop on what is going on behind the doors of “progressive radio” in the Bay.

I have known Nora Barrows Friedman since we were teenagers working at Youth Radio and Davey D’s Street Knowledge Radio show on KMEL. Most recently we have worked together for the past five years on KPFA’s Flashpoints radio show, which airs the Block Report on a consistent basis. I thought that she would be the perfect person to explain this situation considering that she is a victim of it. Check her out …

M.O.I. JR: Recently there have been major changes made at KPFA. Can you explain them? How are you, Anita Johnson, Mike Biggz and Eric Klein affected?

Nora: Mike Biggs and Eric were laid off on Monday, with absolutely no notice or forewarning with their respective shows. Eric is a father with a partner who is out of work. Mike was already taking a reduced salary for a long while, because KPFA had decided to employ him at 19 hours a week, just below the 20 hours that would get him health benefits.

M.O.I. JR: How has Flashpoints been affected specifically? How will this affect the content on Flashpoints? When does this take effect?

Last Monday (Dec. 7), KPFA eliminated the entire technical producer position. And on Wednesday, Dec. 9, Rijio told me she was slashing my position to 50 percent – 20 hours a week.

This creates an incredible hardship on the show, and we cannot operate at this level of amputation.

Nora: I think that KPFA has been actively trying to restrain Flashpoints’ success for years now, but most of all during Rijio’s tenure as general manager. We take on the stories that make the establishment nervous, whether it’s police beatings and injustice inside the station – Nadra Foster – or outside the station. We report from the ground, whether it’s from Haiti or the West Bank or at the frontlines of the Native American struggle.

We have always refused to cooperate with the tools of the corporate mainstream media, which the KPFA News Department has done for years. We have always held the Pacifica power structure responsible and accountable to the people.

I also have to say that our Palestine coverage in particular has garnered intense scrutiny, to use a euphemism, from the pro-Zionist crowd. There are forces that have been attacking Dennis and me on a regular and sustained basis, and I suspect that the Zionist community puts pressure on the KPFA board and management to expel this story from the airwaves and discredit our reputations.

M.O.I. JR: What has the response been like from the listening audience so far? And what have other journalists that you are in contact with said?

Nora: Over the last 24 hours, I have received a nonstop barrage of phone calls, emails and text messages from people all over the world who love the show and depend on our coverage as a lifeline. People are outraged that Flashpoints is being attacked and eviscerated. I know for a fact that there has been a steady stream of angry emails, letters and phone calls to KPFA management, and there will be much more protest and boycotting of donations to come.

M.O.I. JR: Does it concern you that all of the people laid off or who had their paid hours cut were under 35? This is also in light of KPFA getting rid of Youth Radio a few years ago.

There has been a steady stream of angry emails, letters and phone calls to KPFA management, and there will be much more protest and boycotting of donations to come.

Nora: It concerns me a great deal that the people being laid off, myself included, are all under 35 years old. Mike and I came up together as alumni of Youth Radio, a show that current KPFA management scrapped a couple of years ago. This proves that KPFA is not interested in bringing in new, fresh, eager talent to run this failing radio station. They are hiring their friends and cronies who tow the line and are therefore slashing these essential voices and stories from the airwaves.

Nora: Where do we go from here? We need to fight. This is all very reminiscent of the lockout 10 years ago. Management needs to be called on the carpet for these actions, and the listeners need to be able to voice their concerns. Protests, sit-ins, letter-writing campaigns and the like are very effective. People have been saying to me that they are stopping their annual donations to KPFA until their favorite shows, including Flashpoints, are supported and not amputated.