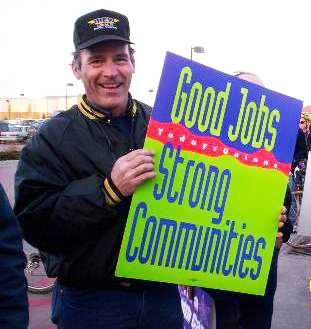 In response to “Why are no Blacks working?” by Bay Area Black Builders President Joseph Debro that appeared in print and online in the SF Bay View, Tom Owens, a high level union official, sent the following message via email to Debro. Owens is director of marketing and communications for the Building and Construction Trades Department in the Washington, D.C., office of the AFL-CIO. Debro’s emailed rebuttal follows.

I read with interest your article titled “Why Are No Blacks Working?” in which you mimic the talking points of the Associated Builders and Contractors, who frequently use people such as yourself as unwitting props in their never-ending public relations campaign designed to mask the true nature of the open-shop business model – which is primarily predicated upon winning bids and contracts through the assembly of a low-wage, low-skill, oftentimes indigent and undocumented workforce that wreaks havoc on the economic and social structure of local communities all over the nation.

I guess you just conveniently failed to mention that the percentage of African American workers in union construction has held steady between 30-40 percent for the last 20 years, while the percentage of African Americans working in the open shop has steadily declined to less than 5 percent – due to the preference of open-shop contractors to hire indigent and undocumented workers who can be used and abused with impunity.

You may want to also take a look in your own backyard at the Port of Oakland Project Labor Agreement, which has been a model of success in reaching out to local minorities and disadvantaged communities and recruiting such citizens into skilled trades apprenticeship programs.

Maybe you should have titled your article “Why Are No Blacks Working in the Open Shop?” Now that would have been a more compelling read. But, then again, your benefactors at the ABC would probably cut off the money they are paying you to produce such dribble.

Rather than answer my reasons for why Black people are not working, you attack me and impugn my motives. You condemn my article because it expresses some of the same valid concerns expressed by the ABC.

I oppose the project labor agreement because it hurts small contractors. It requires them to sign a hiring hall agreement or, if they do not, they must pay benefits to unions that their non-union workers will never see. All of our small contractors pay prevailing wages even if their workers are denied admission into the union.

You claim that ABC is using me, because I agree with and restate some of their criticism of unions. By that logic, because I criticize the president of the United States, as do right wing Republicans, I am being used by these right wing nuts because I express some of the same concerns as they do.

You claim that the number of Blacks has remained steady over the years. You cite some numbers. You do not cite the source of those numbers, nor do you cite the unions from which these number came or the number of hours worked by these African American union members.

My criticism was that many of the Black union members in our locals are the last hired and the first laid off. I condemn nepotism and favoritism in unions and any other institution.

You cite the Port of Oakland as your example of the good job the unions have done. The Port is where most of the imported labor worked.

Craft unions paid bonuses to workers from right-to-work states to come to Oakland and work at prevailing wages. The numbers cited by the Port were cooked. Some of the people who were paid to collect those numbers have admitted that they cooked the books.

Because I expressed some of the same concerns as those expressed by ABC, you make them my benefactors. I have never taken money from them. I do not know them. I have never knowingly spoken to an ABC member.

I know their philosophy. You are right about their labor practices: They not only exclude Blacks, but they underpay us. I hope that they continue to point out the weakness of the craft unions, as will I.

I hope that someone in your organization will take these criticisms as constructive and move to correct any flaws. We will continue to raise the fairness issue.

We will no longer lie down. We will push back. We want to make craft unions stronger and we want to earn union membership.