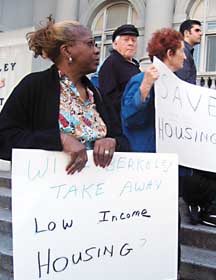 Berkeley – The plan to sell off Berkeley’s 75 public housing units is harmful to Berkeley’s poor, elderly and disabled population that fail to qualify for the Section 8 program or meet the minimum income requirements to reside in so-called affordable housing units owned and operated by local nonprofit housing developers.

Recently the public housing residents of Berkeley received a shocking notice dated Oct. 27, 2009, announcing that the Berkeley Housing Authority (BHA) is preparing to convert their public housing units into privately owned housing subsidized by Section 8 voucher rental assistance and that their housing would be transferred to a local nonprofit housing developer.

The BHA’s scheme to file a Disposition Plan with the U.S. Department of Housing and Urban Development (HUD) during December 2009 to dispose of 75 units of federal and state scattered public housing units threatens to displace Berkeley’s poor from their homes by the spring of 2010. The BHA expects approval of the Disposition Plan by HUD in the spring and has already been searching for a so-called nonprofit developer to transfer the public housing to.

With most of those homes currently occupied by low-income families with several children, the residents have been informed that if the Disposition Plan is approved by HUD and the BHA proceeds with converting the public housing units to privately owned property, the tenants will most likely be eligible for relocation assistance if they are to be displaced, after receiving a 90-day notice requiring them to move.

The BHA hired the firm of Overland, Pacific and Cutler, Inc., to represent it in implementing the Disposition Plan and displacing the residents once the plan is approved by HUD and the California Housing and Community Development Agency.

Alarmed by these developments, the residents have been meeting every Saturday morning at Inter-City Services, 3269 Adeline St. in Berkeley, to unite and organize against the plans to privatize and transfer BHA’s public housing to a so-called nonprofit developer. The residents invite the public to join them and get involved in saving Berkeley’s public housing before it is privatized and disposed of permanently.

Organizers believe that their housing stability is at risk and that through their meetings leaders can emerge and speak truth to power in an effort to keep their families from being displaced from their homes.

Keith Carlisle, one of those residents, said: “The Disposition Plan calls for the selling of the buildings to a private developer with deep enough pockets to totally renovate the units. The Housing Authority says that the units need at least $6 million in repairs. The average renovation is slated to receive $60,000 to $75,000 dollars in upgrades.

“The problem is that once these units receive that kind of upgrade, low income people will not be able to afford them. This is gentrification thinly veiled under the banner of urban renewal. The majority of the tenants are African American, Latino or foreign born nationals. Most are low to very low income. Many are disabled and have become middle aged waiting on quality of life improvements promised by each successive Housing Authority executive director and their staff.

“We feel that we are being shown the door because those who are charged with our care have abandoned that mission for profitability and that the plan is to get rid of low income African American families in the City of Berkeley, California. This is being done very quietly. The media is not being contacted by the Housing Authority because they don’t want any opposition from the concerned public.

“It is truly the 11th hour for many of us in Berkeley’s public housing. We want to get our story out in front of the general public in the hope that public outcry will stop the proposed action of the Berkeley Housing Authority,” Carlisle said.

“The plan is to get rid of low income African American families in the City of Berkeley, California. This is being done very quietly. The media is not being contacted by the Housing Authority because they don’t want any opposition from the concerned public.” – Keith Carlisle

The loss of Berkeley’s public housing means there would one less option for the poor needing a place to call home and would result in a great loss to future generations of low-income families, the elderly and disabled who would become homeless if not for the existence of public housing.

Public housing allows some families with no income at all to be housed. Regardless of whether a family’s income increases or decreases, they are still allowed to reside in public housing without being displaced. Public housing offers stability to Berkeley’s low-income families during recessions and hard times resulting in state budget cuts that have been harming the poor, elderly and disabled.

On the other hand, families in the Section 8 program may be terminated from the program if their family income becomes too high, and tenants in the so-called affordable housing units operated by nonprofit developers may face eviction for earning too little money, or too much money, if they are not in one of the housing assistance programs such as the Section 8 program or Shelter Plus.

The profitmaking push to privatize Berkeley’s public housing is taking place because HUD does not reimburse Berkeley for renting out public housing units nearly as much as it would if the rental units were privatized and converted to the Section 8 model, being promoted by those wanting to profit by getting their hands on public housing all across the nation.

Currently there’s a $400 million funding shortfall in the Section 8 program all across the nation, and as a result many public housing authorities have recently had to decrease the Section 8 funding subsidy to tens of thousands of low-income renters. When nonprofit housing developers exploit the Section 8 program, the low-income tenants have to make up the difference in rent when the Housing Authority does not have enough funding to cover the high rents being charged to Section 8 tenants. Section 8 tenants are often being charged higher rents than their counterparts who are not in housing assistance programs in so-called affordable housing sites in Berkeley and Oakland.

As a result of the housing assistance programs being exploited to the max, the Section 8 funding shortfalls across the nation are currently so bad that during December of 2009, the New York Housing Authority rescinded 3,000 Section 8 vouchers from formerly homeless families, victims of domestic violence, children aging out of foster care and families in the child welfare system. The loss of those 3,000 vouchers created more homelessness.

Indeed, converting Berkeley’s public housing units to so-called privatized affordable housing units guarantees that most low-income families who do not qualify for the Section 8 program or some other housing assistance program such as Shelter Plus and fail to meet the minimum income requirements of so-called nonprofit developers will find themselves left out in the cold and homeless if the BHA’s Disposition Plan moves forward.

The proposed Disposition Plan ensures that public housing will no longer be a viable option for Berkeley’s poor and threatens the stability of large low-income families needing a place to call home in Berkeley. 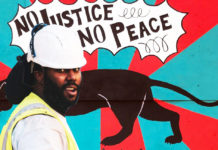