Aid needs to be centrally coordinated, not hindered, they say

by Dan Beeton, Center for Economic and Policy Research (CEPR) 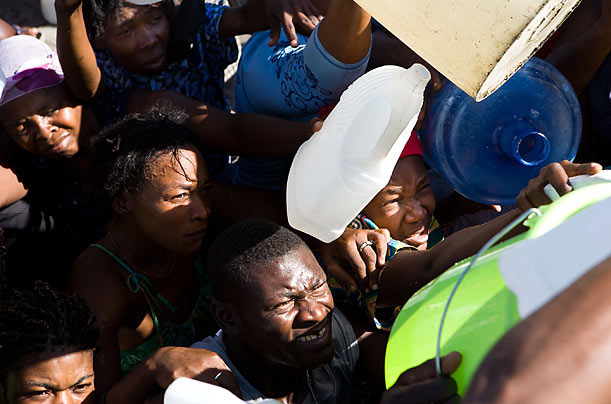 Washington, Jan. 20 – NGO’s and policy groups today called for the U.S. government to prioritize aid delivery over military deployment to Haiti, as airdrops of water supplies only just began to get underway, and as the U.S. military continued to prevent planes carrying aid supplies from landing in Port-au-Prince and Jacmel, the largest two cities devastated by the earthquake. A USA Today report Tuesday stated that the U.S. had airlifted only 70,000 bottles of water into Port-au-Prince since the earthquake last Tuesday. Three million people are estimated to be in need of water and other aid.

“Right now the U.S. is blocking aid. There should be better coordination so that all actors – other governments, agencies and NGOs – ready to deliver aid are able to do so,” said Melinda Miles, founder and director of Konbit pou Ayiti, an aid and assistance organization based in Haiti.

Established aid groups who have a long history of working in Haiti have suddenly found themselves unable to deliver urgently needed medical, water and food supplies because the U.S. military will not grant them access to ports and airports. Doctors Without Borders reported yesterday that one of its “plane[s] carrying 12 tons of medical equipment, including drugs, surgical supplies and two dialysis machines, was turned away three times from Port-au-Prince airport since Sunday night.”

Groups ready to deliver aid to Jacmel – the fourth largest city in Haiti – were told they would receive no clearance to land there from the U.S. military, even though they already had both aid supplies and the means for distributing them. This aid is only just now beginning to be delivered because of assistance from the Dominican Republic.

Aid groups also report that outside Port-au-Prince there are places where quake survivors have fled where the infrastructure is capable of receiving airdropped aid. Many of these areas are not being utilized for airdrops, however.

Numerous media reports and statements from officials suggest that U.S. and U.N. relief teams have delayed aid distribution due to security concerns. Yet Lt. Gen. P.K. Keen, deputy commander of the U.S. Southern Command, reports that there is less violence in Haiti now than there was before the earthquake hit, and Dr. Evan Lyon of Partners in Health stated, “There’s also no violence. There is no insecurity.” He said the security concerns are being overstated due to “misinformation and rumors … and racism.”

“The U.S. military needs to prioritize getting clean water and other essential needs to the population,” Mark Weisbrot, co-director of the Center for Economic and Policy Research, said. “The clock is running and the lack of clean water is a serious threat to public health. They have the ability to get water or, where it is useful, water treatment chemicals, to everyone in need. That should be a vastly higher priority than getting thousands of more troops and military equipment on the ground.”

Sources who have participated in “cluster group” meetings held by the United Nations Stabilization Mission in Haiti (MINUSTAH) report in-fighting and confusion over aid distribution, as different teams point fingers and assign blame for who is responsible for aid delays. Some distribution missions that MINUSTAH had thought to have been completed have yet to occur, the sources say.

Relief teams and NGO workers on the ground in Haiti report that food and water is being directed at large scale camps, but not isolated areas where in some places groups of hundreds of people still await any assistance. Jacmel, near Haiti’s Southern coast, has received much less attention from foreign governments, aid groups, or the media – due in part to U.S. denial of aid groups’ access into Jacmel. The first team of foreign surgeons arrived in Jacmel yesterday, joining only “three Haitian doctors and a few Cuban ones for over 2,000 patients” who “are still recovering the injured from the rubble.”

Dan Beeton can be reached at beeton@cepr.net.

Haitian elections neither free nor fair